Velocus is a roman. He is fierce, strong, competitive, agile, and brave. He is also very intelligent. He learns quickly, which has come in handy recently with the learning of his new world. He can be quite harsh, but is also very gentle at most times. He loves to hang out with friends, and to make new ones. Once he does make friends, he is very loyal, and will protect them no matter what the costs. He is very athletic, and knows how to fight. He is very skilled in almost every weapon he puts his hands on. He loves the arts, and loves to draw and listen to music. He also is a huge animal person. His favorite animal is a dog. Velocus is homosexual.

Lars Gratidius was a wealthy senator in the city of Ancient Rome, in 279 B.C. Lars was a lonely. All of the other senators had wives, and families. Lars had nothing. No women ever took interest in him, and the only time he got love from a woman was when he bought it. He did not like to buy women unlike the other senators. He wanted a woman that he could love. A woman that he could call his own. That’s when she came.

One afternoon, Lars was in the forum when he accidentally ran into a woman. The woman was beautiful, with long flowing blonde hair, and eyes that were not just one color, they were a mixture of many. Everything about her was flawless. Lars knew this woman was the one. He apologized to her, and she accepted his apology. Lars eventually started to see the women every day after that and finally asked her about herself. She said her name was Vernia, and that she had just recently came to Rome. Lars and Vernia sent the next couple days getting to know each other, and they fell in love. One day Vernia just left Lars, leaving him depressed.

Months later, Lars came home from the Forum, and found a baby in his house. Along with the baby was a note.

"Dear Lars, I'm so sorry for leaving you. I had no choice. I'm slowly going insane because of the other one inside of my head. I can't hold her back for long. You must take care of him. He is our son. If you love me, you will love him. I love you and take care. Love Iris(You know me as Vernia), Greek Goddess of the Rainbow"

Lars almost did not believe this, but he trusted his love. He named his son Velocus, and raised his son like every other roman boy. He taught his son the worship of the gods, and taught him the ways of a roman. Velocus loved o play with the others senators children. They would play games while their parent did their business. Velocus loved to play with his friends, especially his friend Atticus. Atticus and Velocus were best friends. They did everything together. They explored the city together and played everything together.

At the age of seven, he started his education to become a citizen, and a soldier of Rome. Velocus went to the local school. Velocus was an excellent student. He learned everything fast and he stayed with his studies, and rarely got beat for being wrong. Atticus and Velocus attended the same school, and remained best friends. The two had other friends as well, but nothing could come between them.

Like most boys of the wealthy class, he attended grammar school at the age of 12. Velocus started to feel something weird for Atticus. He found himself staring at him, and having butterflies whenever they talked. This wasn't normal. He was not supposed to feel this way about Atticus, or any boy.

When Velocus was 13, he was home alone. His father was at the forum, taking care of political business. Velocus was studying for a test that he had the next day when he heard something on the top of his house. He got up from his table, when the ceiling collapsed and a snake woman was in front of him. Velocus screamed and turned to run out of the house when the woman jumped on him. He pushed her off of him, and threw a sculpture of Mars at her. This had little effect. The woman pulled out her weapon and swung it at Velocus, and he dodged the move but fell backwards. She advanced on him and raised her weapon. Right before she brought it down, she was stopped by a man behind her. The man came out of nowhere. He took her weapon and hit her with the hilt of it. She flailed backwards and she fell to the ground. He raised the sword and pierced it into her, turning her to dust. The man smiled and said "I'll be watching out for you." The man then disappeared in a flash of rainbow light. That night, Lars came home and was upset by the damage that had been done. Velocus told his father about what happened, but his father laughed at him and called him crazy. Lars then called an architect to help with the repairs.

As Atticus and Velocus got older, puberty hit. They both became taller, toned, and attractive, mostly in Atticus' case. Atticus would talk to Velocus about many of the girls he saw that he thought were beautiful, and Velocus became jealous. He would start yelling at Atticus to stop talking about girls that way.

He then went onto learning public speaking at the age of 16. Atticus had now started sleeping around with many girls, and telling about them to Velocus, making him even more jealous. Atticus started to guess what was going on. He started to realized that Velocus had feelings for him, which freaked him out. He stopped hanging out with Velocus, which enraged him. Velocus became desperate to feel loved the way he loved Atticus, so he put his body up for sell. The first man that bought him did not satisfy his need for love, so he kept doing it. Many Roman men bought Velocus, and eventually Velocus had a new guy every night. None of them satisfied him.

After his education was complete Velocus signed up for the military. While in military training he was taught to march, use his weapons, and he vigorously trained physically. Like he was in the city, Velocus became a prostitute. Many of the other soldiers had sexual desires, so Velocus was paid to fulfill them. Then came the night Velocus had waited for his whole life. Many of the other soldiers convinced Atticus to visit him, Atticus not knowing it was Velocus. Atticus eventually said yes and went to see Velocus. Once he found out who it was, he almost backed out, but you know men. Atticus caved and slept with Velocus that night and paid him, and left. Atticus never spoke to Velocus again, ever. Velocus continued his training, and his prostitution services. He was then able to fight alongside other romans in against their biggest enemy, Carthage.

Velocus was one of the many soldiers of a roman ship during the First Punic War, in 260 B.C. in the first naval battle. Carthage, being a strong naval force, took out many of the roman ships, one being Velocus'. Velocus' ship was torn apart by the Carthaginians, and he barely survived. He was floating in the middle of the Mediterranean on a piece of wood. He was floating for hours, and he knew he would die out there. All of his hard training and education, and his life were over. But what came next was not going to make his life any easier... or shorter.

That night, the Mediterranean got fierce. The waves were huge and furious. The wind picked up and lighting and thunder came every couple seconds. Velocus knew this is what would kill him. He would just let a wave take him and drown him and that would be that. Right? WRONG! A wave did take him, and it knocked him unconscious, but when he woke up he was on an island. The island was covered in beautiful plants. He stood up and explored the island. After a couple of hours of exploring, he found a group of women that were tending to a bunch of people. One of the women ran to him and told him to have a snack and handed him a flower. Velocus was starving so why not. He ate a flower, and he had many after that. Velocus had many of these flowers every day. What seemed like a few days later Velocus had no flowers to eat, and the whole island had changed. It changed into a beautiful building with lots of lights and tables, and a box that had people, ghosts, and other things trapped inside of them. Velocus was very confused by this. How did the island change into this? He did not like the new island. He ran for an opening, many of the women trying to stop him. He pushed them all out of his way, and he finally made it outside.

Outside of the building was even weirder. There were many people walking around, and other buildings like the one he just exited were behind him. He wanted to go home. He had to find his way home. He ran through the crowds of weirdly dressed people, and he quickly got lost. He did not know where he was. He asked many people where he was but they all looked at him weird, and spoke in a language he didn't understand. He finally asked a woman and she answered back in Greek, which Velocus learned in school, "Hello demigod" The woman laughed and then she showed her true form. She had flaming hair and metal leg and a goat leg. And what did she call Velocus? A demigod? Like a child of a god? Not possible. Velocus gathered his thoughts and ran, screaming for help, but he realized he wasn't speaking Latin. He was yelling in Greek. The woman finally caught him and threw him against a wall. The woman raised her dagger to kill Velocus when the empousa turned to dust. Behind where the woman used to be were a teenage boy and girl. Velocus asked who they were and they told then they were Derrick and Amber. They told him they were demigods and they were on a quest and they were heading back to camp when they heard his calls for help and they came. The two asked who he was and he told them. They asked about his tattered armor, and he told them it was the normal thing to wear for a roman soldier. The two exchanged a worried look and then they took him back to camp.

Once he got to camp, he spoke with Alexander. Alexander had Velocus explain everything. Velocus told him about going to war with the Carthaginians, and losing. About being stranded and then how the storm brought him to the women with the Velocus said he was very confused. Alexander explained everything. He told him that the island he was on was the Lotus-Eaters Island. Once you are on the island, time flies by in what seems like a couple days. It had actually been centuries. He told Velocus that since he hadn't ate any lotus flowers that day that he realized he had been tricked. The woman that attacked him was an empousa, a monster. And it is true that he is a demigod, they just do not know who his godly parent is. They then helped Velocus understand the new life that he will have to live, and taught him everything they could. 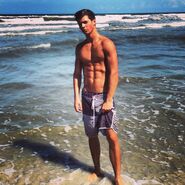 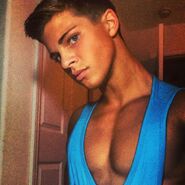 Retrieved from "https://camphalfbloodroleplay.fandom.com/wiki/Archived:Velocus_Gratidius?oldid=1661249"
Community content is available under CC-BY-SA unless otherwise noted.