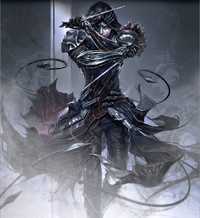 In Chicago, 1996, Deimos fell in love with Amanda Ospinos, a spunky demigod daughter of Zeus who had always endured a tough life, both by her step-parents and by gangs once she moved into her own home. Within a year, Amanda gave birth to Xurxo, and a few months later Deimos sadly had to leave.

In order to make a good living for her son, Amanda married Kyle Fernandez, an charismatic and ambitious man. With him was his step-son Alexander, who was also a son of Deimos. Alexander was the reason Fernandez was wifeless. His wife had cheated on him with Deimos, and he had divorced her. Mysteriously, she had died a few days later, giving him custody of little Alexander.

Fernandez, for whatever reason, deduced that Xurxo had more potential than Alexander did. So he gave up Alexander to an orphanage, and forced Amanda to swear on the Styx never to speak of Alexander.

Thus, Xurxo lived a fearful life under Fernandez, who frequently beat him and Amanada, and made his life a living hell at home. In school, life was not much better, as gangs members (secrectly paid by Fernandez) beat him up as well.

It when he was 7, during one such beating, that he unintentionally used his powers. Shocked with fear, the gang members backed off, only to have Xurxo proceedd to beat the cr@p outta them as they cowered before him. This was the start of Xurxo's bullying days. For 7 years afterword, Xurxo became a terrible bully, ganging up on kids, and even making his teachers scared. He was moved from school to school every year on account of his brutality. Yet nothing could stop him. While his mother despaired, his step-father only grew happier every day.

Eventually, one day a new kid moved to Chicago and transferred to the current school Xurxo was. Xurxo, like usual, tried to beat the kid up after school. However; the kid had other plans. He was a child of Deimos too, with better control of his powers. Using them, he quickly beat up Xurxo, and his "friends" quickly turned on him, joining with the new kid. Soon, the kid became the new bully, totally outstripping Xurxo in physical ability and brutality.

Eventually, Fernandez, who had frantically tried to figure out the new kid's identity to snuff the life out of him, found the kid to be Alexander, the child he had long ago abandoned to an orphanage. Proud of how his son had become, he first killed off Alexander's adoptive parents. Then, he regained Alexander as his own. Alexander was more than happy to have his father finally recognize him. Not only was his father rich (even though it was through gangs), he could beat up on Xurxo at school and home.

For a year, Xurxo's life turned upside down. The bully had become the bullied, the torturer the tortured. He became the pariah of his whole community. He was hated by those he bullied, and those who had been at his side as he bullied. Discovering what his bullying had caused, Xurxo decided to never bully again should he get out of his current situation. But it seemed unlikely that he would ever get out his horrible life. That is, until one fateful night.

One night, he was walking home when he stumbled across a group of Alexander's cronies beating on a poor defenseless girl. Reminding himself of his vow, he stepped in, and with little trouble protected the girl. Carrying her to the nearest hospital, he helped her to the hospital bed, and went home. The next day, the girl, thankful for what he had done, invited him over to hang with her and her friends. Though at first they didn't trust them, and he didn't trust them, they soon warmed up to each other. Soon, Xurxo began befriending more and more people, and his life became bearable again.

Meanwhile, Alexander had begun leading actual groups of the gang he was in, the Iberian Dragons, a splinter group of the Latin Kings that helped its patron gang grow. With this newfound leadership, he began terrorizing the neighborhood. He broke into homes, assaulted countless people, and due to his father gained immunity from the police. Xurxo, horrified by what his brother was doing, tried to convince his brother to stop. But Alexander refused, and in retaliation sent some of his lackeys to kill Xurxo. Caught by surprise, Xurxo was tied up and they planned to drag him away to a chemical plant, where they would kill him. Fortunantly, before they were able to do so, some of Xurxo's friends found him and were able to save him.

Realizing how truly dangerous Alexander and his gang were becoming, Xurxo and his friends decided to fight fire with fire, and formed their own group, the Crimson Wings, to combat the Iberian Dragons and take them down. Xurxo and the others secretly moved themselves to the Crimson Wings' headquarters, where they could fight without their families being a target.

For a month Chicago became a battleground between the Iberian Dragons and the Crimson Wings. Pitched fights occurred almost regularly, and everybody and everyone, much to the Crimson Wings' dismay, was becoming battered and bruised. Eventually, even Xurxo's mother, who he took great strides to protect, was attacked by the Iberian Dragons. Enraged by this, Xurxo focused on stoping the conflict, seeing how much damage both sides were doing.

It was there that Xurxo finally faced Alexander. Though Alexander tried to goad Xurxo into joining the Iberian Dragons, he wouldn't have any of it, and after Xurxo angrily told Alexander off, they battled. Unlike the last time, the battle was even. Both Alexander and Xurxo battered themselves to near exhaustion, and yet they fought on. Both wanted this rivalry to end, though the method how to was different between the two of them. However; neither could gain the upper hand against the other, and soon, both trying to end the fight, ferociously attacked each other for a final time, their powers of fear emanating from them. The combined attack and use of their powers left both almost incapacitated, barely able to move an inch.

It was then that Fernandez arrived. Proclaiming that Alexander had been proven useless, Fernandez shot Alexander in the head and killed him. Xurxo, horrified, questioned why Fernandez would kill Alexander. Fernandez then revealed what he had been planning: Wanting a powerful son to become a powerful gang boss, he would use his son as a means to become a truly powerful gang boss himself, and from there further even more goals, though what they were he would not elaborate. When he thought that Alexander was too weak, he instead gave away Alexander and tried to use Xurxo. When Alexander came back, Fernandez gladly molded him into a gang boss. But now with Alexander dead, Fernandez could take over. All he needed to do was get Xurxo out of the way. Aiming the gun at Xurxo, Fernandez prepared to kill Xurxo.

While Xurxo and Fernandez spoke, Xurxo's mother Amanda, having finally healed her wounds and realizing that Fernandez was planning to kill Alexander and Xurxo, she rushed to the factory. Unable to get in, she did the only alternative to stop Fernandez. Being a daughter of Zeus, she called down a lightning bolt, which caused an explosion in the factory. She died in the explosion sadly, when debris crushed her.

After the explosion, Xurxo was able to climb out of the remains of the factory. As he climbed out, he found his step-father pinned under some debris. Having Fernandez's gun, Xurxo was tempted to kill Fernandez. Fernandez even try to goad Xurxo to kill him, as he rather be dead than embarrassed and shamed like this. However; Xurxo refused to let his anger and fear control him again, and instead shot the gun upwards, to help the police choppers locate their location.

After Fernandez's arrest and subsequent placement in prison for life, Xurxo had a funeral for his poor mother and step-brother. After the funeral, Xurxo lingered at his mother and step-brother's graves alone, and promised them he would not let people like Fernandez ever hurt people again. It was then that his father appeared. Deimos congratulated his son on his mastery over his fears. However; Xurxo wasn't so happy to see him, blaming him and his fear for ruining his life and family. Though he didn't hate his father, he made it quite clear he never wanted to see Deimos again. Deimos, saddened by his son's anger, left.

A week later, while he and the Crimson Wings were helping rebuild Chicago, that night he received a message from his father to go to Camp Half Blood in order to master his powers and be protected from the monsters that lurked. Though at first he refused to go, his friends convinced him they could hold down Chicago while he went to camp to train. Promising to return soon, he found a satyr that would take him to Camp Half Blood. A week later, he arrived.

Though he used to be a terrible bully and spiteful person, after the events concerning his step-father and brother, he has changed significantly. He is now very kind to almost all he meets, though it is more of distant politeness, as he has trouble trusting others. Remnants of his past demeanor are shown in his grudges. If he or a close friend of his has been slighted, he wil stop at almost nothing to avenge himself or others. He also has a tendency to judge others too quickly, and jump to conclusions.