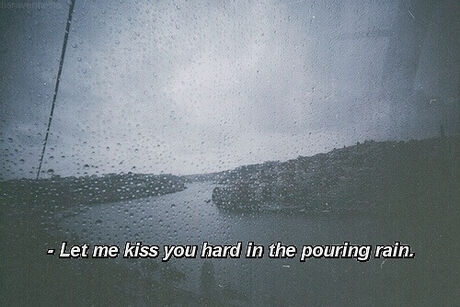 Roxanne: When she walked out of Hypnos' cabin, it was just a light drizzle. She thought it fit her mood perfectly and didn't grab an umbrella, the weather was quite warm, so she just headed toward Apollo's cabin; soon, she realized what a mistake that was, as the rain got heavier by the second. She wasn't anywhere close enough to shelter, right in the middle of camp, and the damage was already done. Her long hair and white sundress were soaked, and she threw her head back she was laughing so hard. Oh, the irony.

Lucifer: Roxanne was taking a bit longer than usual to get to his cabin, and Lucifer attributed it to the substanially increasing  downpour of rain outside. He made his way out into the rain in a white t-shirt, and his usual pair of skinny jeans. On his way to retrieve her from her own cabin, he was greeted by her beautiful figure laughing in the pouring rain. He quickly closed the distance, chuckling softly on his own, "Roxanne, what are you doing in the rain in that attire?"

Roxanne: She grins when she sees him, "I don't know!" She twirls around a little, still giggling softly. "I don't―I don't know."

Lucifer: He takes her hands in his, laughing just as hard as she, spinning around with her as the rain mats his hair to his head.

Roxanne: She leaps into his arms, wrapping her arms around his neck in a fierce hug, still a little breathless after their impromptu dance. All laughter gone, she whispers, "I don't want you to go..."

Lucifer: His smile lessens, but remains on his face. Lucifer had been dreading this entire situation since he awoke. He kissed Roxanne's forehead softly, continuing to smile, "I don't want to go."

Roxanne: She pulls back slightly, tears gleaming on her cheeks. She forces a smile on, "We should get inside."

Lucifer: The rain concealed her tears, and naive Lucifer accepted the facade she put on as the real deal, "We should, Love. Lets get to your cabin, it's much closer." He said, carrying her towards her cabin.

Roxanne: She buries her head in the crook of his neck, "Wait, wait, stop."

Lucifer: He stops, cocking his head to the side, "What's the matter, Roxanne?"

Roxanne: She somehow manages to slid down without losing her balance, mildly surprising herself. She looks up at him, chewing on her lip nervously. "I need to―I need you to kiss me like you mean it."

Lucifer: He doesn't quite understand it, but has seen several situations like this on TV. He palms her cheek, leaning down slowly, letting anticipation ubild before finally pushing his lips into Roxanne's.

Roxanne: She wraps her arms around his neck, moving as close to him as possible. She'd never allow herself to do something like this in public, even if there weren't many people around, but the heat from their bodies combined with the cold rain for some reason making her reckless.

Lucifer: He puts more into the kiss, and Lucifer moves his hand from her cheek to her hips,  carressing her happily.

Roxanne: She smiles into the kiss, finally pulling back for air. "Thank you for that," she tucks some hair behind her ear, somewhat nervously.

Lucifer: He pressed his forehead into her's, smiling, "It was my pleasure, Princess."

Roxanne: She shivers lightly and hugs him again, wrapping her hands around his waist.

Lucifer: He unwraps her hands from his waist, keeping hold of one while he leads he through the rain to her cabin, eventually opening and holding the door open for Roxanne, "After you, Roxanne."

Roxanne: She nods her thanks and walks inside, leading him to her room. It looks nothing like her quarters in the palace and she loved it like that. White walls, one full with various pictures taken throughout her life at Camp, some of her family, and many with Jason. A simple queen sized bed and a desk made of dark wood. She smiles at him a little and grabs some clothes from her closet, "I'll, uh, I'll be back in a minute." She heads toward the bathroom, throwing a quick glance back at him.

Lucifer: He nods, "I've got all the time in the world, Roxanne." He said it in a playful tone, and it was his intent, but the words only made him fell sad. Xenophanes kept a smile on for Roxanne. His gaze slowly shifted from Roxanne's behind to the wall of photos. He was deeply engrossed with the pictures, being fascinated with every bit of media that told him what happened while he was asleep. No matter how miniscule it may be.

Roxanne: She returns a few minutes later, clad in an oversized, light sweater and jeans. She stops when she sees him, fascinated by how engrossed he is in the simple task of looking at her pictures. Her fingers go to her still damp hair, brushing through the mess and slowly braiding it.

Lucifer: He finally reached one of her and Jason, holding eachother dressed in Ball attire. The look in their eyes just looked so... perfect to Lucifer. He wished Roxanne would look at him that way, though he can understand what the loss of a loved one can do to someone. Secondhand, but the feeling remains. He caught her reflection in the frame of the picture, and he quickly rehung it, turning to face her, "Welcome back, Roxanne." He grinned

Roxanne: She smiles, blushing a little, and moves closer to him. "I need you to tell me more about the curse. I said it before, and I'll say it again, I won't give you up without a fight."

Lucifer: He sat down on her matress. Luckily he hadn't been in the rain long enough to become entirely drenched, "Well, my mother was a very devout follower of Lord Chronos. And my father, well, he was Apollo himself. When I was killed unjustly, my mother begged a miracle from my father or her Patron. In a stunning show of benevolence, both "blessed" me. Chronos allowed me to experience all of time, and Apollo blessed me with imortallity, eternal youth, and an really really good immune system." He shivers lightly, "I awake during times of great importance. The fall of Rome, the Revolutionary war, the Civil war, and now. I'm not sure what was so important about this life, but either way, I still only stay awake for the same amount of time. A year. Or until I die."

Roxanne: She drags the chair from her desk and sits in front of him, her frown deepening with his every word. "The Broken Covenant..."

Lucifer: He nods, "I've heard of that name around here." He sighs, "If they're goin gto do something, it better be quick. I have one month and four days left."

Roxanne: She buries her face in her hands, "I'm―I'm trying to think of something, anything, but..."

Lucifer: He reaches over and takes her hands in his, smiling. "Don't worry so much, Roxanne. I'm sure we'll think of something. " He was able to say the words confidently, but he didn't quite believe them. He'd tried in most his past lives to fix this blessing, but everytime it went awry. He began to think Roxanne was too invested in him, and he wasn't sure if that was good for her or not.

Roxanne: She frowns, squeezing his hands. "I-I don't know if I can handle losing you, too," she mumbles.

Lucifer: He stood up, pulling her up with him. he wrapped her ina great big hug, warming them both up, "Either way, you'll be fine, Roxanne. You're a very strong girl."

Roxanne: She wraps her arms around his torse, losing herself in his warmth.

Retrieved from "https://camphalfbloodroleplay.fandom.com/wiki/Archived_Roleplay:Lucifer_%26_Roxanne?oldid=1502462"
Community content is available under CC-BY-SA unless otherwise noted.