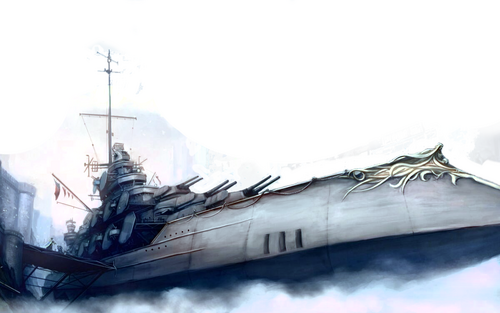 Just after eight AM, campers noticed what looked like a meteor slowly approaching Camp's beach over Long Island Sound. By the time the object was close enough to be identified as a bona-fide floating battleship, most of Camp Half-Blood was awake and readying for the worst. The vessel was plainly on fire and rapidly losing altitude. At 10:23 AM, it crashed into the beach in a "controlled" emergency landing. Between the crash and what looked like massive tooth marks on its hull, it was a testament to its quality that it was still intact. Sure enough, a female osprey nymph and two towering android suits of armor emerged from the smoke.

Two hours later, after Camp Half-Blood finished lunch and the Apollo Cabin checked the nymph for injuries, Alexander gathered the Counselors for a meeting. Once everyone found their seats, the nymph stood at one end of the table and introduced herself. She was an Osprey nymph created by Hephaestus, she said, and she had built the now-crashed airship in one of Hephaestus's volcanic workshops. It was her pet project for the last three years: a combination flying home, personal workshop, and monster-slaying battleship. She got it into flying shape just a week ago, and immediately piloted it out on a maiden voyage for Camp Half-Blood. The idea was to request docking permission in Bunker 9, then recruit the Hephaestus Cabin's aid in "pimping it out." While crossing the Atlantic, however, her ship was caught in a storm and ambushed by a massive sea monster - a leviathan. She hadn't loaded the cannons beforehand, and only escaped after the leviathan caused some major damage to the engines. What was supposed to be a comfortable flight instead became a mad dash for Camp Half-Blood as the engines gradually failed. Evidently, she just barely made it. A signed writ of passage from Hephaestus confirms most of her story, save for the unexpected leviathan encounter.

Once she finished telling her story, Alexander proposed several options to the gathered counselors. Whether they approved of an armed warship inside their borders or not, the ship needs to be either moved into Bunker 9 for repairs, or scrapped. In its current state Avery couldn't remove it on her own. If repaired, then it also must be decided whether or not the ship will be allowed within camp's borders once in flying shape. The Hephaestus cabin would assist Avery in repairs if the ship isn't to be scrapped, but their head counselor would have the final say on if they help Avery improve it afterwards.

The aim of this meeting is to vote on what to do with Avery's crashed airship in the short term (brought back to flying shape, or scrapped), and if repaired, whether to allow it to stay in camp afterward. Please make just one RP post using your characters' word bubbles in the section of whatever option they are voting for.

Note: If characters have solutions they would like to suggest on top of what's included in the vote (I.E. they think the ship should be be repaired and kept in camp, but Avery shouldn't be allowed to pilot it freely, etc., ), then Alexander will take them into consideration too. He will make the final decision based on the counselors' responses. (Well, technically staff will, but you know.)

Further Note: Option 1 (scrapping the ship) will only succeed if it has more votes than Options 2 & 3 combined. If Option 2 or Option 3 are chosen, the airship will be added to Bunker 9's location page for a couple months while under repairs. If Option 3 is chosen, it will remain there afterward for people to RP with. It will be available for use in RPs, quests, events, etc., henceforward.

Before Alexander opens voting, Avery begins to speak. “My airship should stay and be repaired here because, first off it's a badass airship. And second off it's a badass airship. Why wouldn't you want this glorious piece of machinery around as defense for the camp?” She whispers to herself “when I'm not using it”, then she continues to speak to the rest of the room “It's a perfect spotter and defensive measure, it can be used to transport things and it has plenty of combat capabilities in case anything bad happens. I don't see a reason to not have it here, it's a great community project. Just no-one allowed in my room. Oh and it's also badass. Thank you.”

Only in death  does duty end

The airship is currently crashed on Camp's beach. This option is to do away with the crashed ship entirely, rather than repairing it.

"First of all, I find your reasoning behind why it should stay to be incredibly lackluster. No matter how badass this ship is doesn't make that a good reason why it should stay here at our camp. Secondly, in the midst of chaos with a possible threat approaching, I just don't think it's a smart move to be deploying an entire cabin who can be used to help upgrade everything we currently have just to help fix your ship. If we could guarantee the ship's completement before the enemy's approach then I'd be all for it, unfortunately there is no guarantee there and we have no clue when a possible attack could take place. Long story short, my vote is to scrap the airship."

"I'm inclinded to agree with Landon on this one. Not only is there a threat looming over us, but we also have to continue to make sure our own campers are safe and prepared first before helping someone repair a ship that may not be finished by the time a war is upon us."

"Are you that jacked enough to play buggin' jokes on us? You were given ample time to explain yourself for docking this monstrosity within camp's borders. And yet I hear the lack of objectiveness in your statement. 'Glorious piece of machinery'? 'Badass airship'? 'Perfect spotter and defensive measure'? We need specifications for your claims. War may happen at any time and as such, we cannot focus our manpower and resources on repairing your hunk of metal but on training everyone else instead. Who knows, you may even be working with those cretins at the Covenant. But you're not going to fool me. This airship can go to perish but," he glances at his fellow counselors, "Can we all be good darlings and let ourselves keep close watch on our new guest? I am highly suspicious of her."

Joel: "I just don't think having a battleship of this calibre here is a good idea. As much as it could help us, I'd rather be having the Hephaestus kids work on something else that we can guarantee will be completed before this impending attack, rather than having something that could really just be a drain on our resources.

Option Two (Repair the Airship; Do Not Allow in Camp) (+6)

The airship is currently crashed on Camp's beach. This option is to repair the ship to working condition in Bunker Nine, but require Avery to remove it from Camp's borders as soon as possible after the repairs are complete.

"I agree, there's no harm in having a couple of Hephaestus kids repair it and let it be on its merry way. However, I have a bit of suspicions about its origin and the flyer, but, nonetheless, that isn't my business.

"There's no harm in helping someone, but I feel unsafe with this person here - especially when it's someone we don't even know - but that doesn't mean we can't spread some kindness here and there. I say we help. We aren't savages, correct?"

Option Three (Repair the Airship; Allow it to Dock in Camp) (+19)

The airship is currently crashed on Camp's beach. This option is to repair the ship to working condition in Bunker Nine, and allow it to remain there as a powerful asset for camp. The Hephaestus Cabin, if they are willing, will help Avery further improve it. Otherwise she'll work on it on her own.

"If you want to think about this from a war stand point then it makes absolute sense to have the airship under our belt before anything like that begins. Sure it may take a decent amount of time but I have complete faith in Hephaestus' cabin to finish it on time amongst the rest of their workload."

"The camp is low on people right now but I think lending a few helping hands on repairing the airship won't hurt. We need all the help that we can get if we want to survive by the time a war breaks out. I am sure the Hephaestus kids can do this in no time, no sweat."

It wasn't clear when Minka had arrived on the scene to stare at the hulking mass of smoking metal like everyone else. Whether it counted as staring when her eyelids were glued shut or not was another topic for another day. She'd sent out a brief, silent horde of undead mites to survey the new decoration to the beach and now at the table, had her head cocked at the decisions being dished out. There was also the question of the position of her skull being such for a habit, or shameless exhaustion. The newest counselor of Cabin Three was frankly cursing out her predecessor for not being around when she wasn't grasping for ways to cope with the workload dumped on her. Her tightly coiled braid swung lifelessly to one side after she removed the pins trapping it to the back of her head. "Give her a nonsympathetic chaperone slash parole officer, get the tech savvy to check for danger now if they haven't already - gods know if this is just a feint to wipe out half of the competent fighters we have - and keep the thing for Celestial bronze scraps if it comes down to that. It's similar to another Happy the Dragon, which we have blueprints and records of and don't tell me I'm wrong because I just checked yesterday." She opened her eyes at last it seemed, then she shut them again with a growl of frustration. "Your 'badass' pet ruined a lot of nocturnal cabin naps. No thanks."}}

As a counselor, he's informed on the threats going on to their safety. It really doesn't seem all that bad to adopt the ship. "Well, it is a badass ship," he comments cheerfully. "I don't think I can say no such badassery."

Fabian: "I think it would work better in our defence?"

Retrieved from "https://camphalfbloodroleplay.fandom.com/wiki/Archived_Roleplay:Main_Forum/General/Emergency_Counselor_Meeting_-_Airship_Down_-_Option_Three_Passed?oldid=1798066"
Community content is available under CC-BY-SA unless otherwise noted.