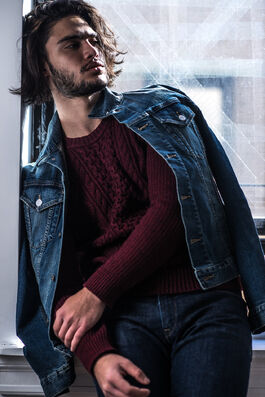 Paavo:It wasn't like any other day for the "son of Aetna", freshly claimed and shortly settled in what was now their new home; specifically, the Aetna Cabin. Honestly, short of when he first crossed over its self-churned lava-moat, Paavo thought nothing could phase him anymore. Which was definitely saying something.

Polly: Polly had been exploring the premises from the moment they were claimed. Currently heading to the Cabin for the first time, Polly stared for a moment of the lava moat, shaking her head at it's absurdity. "Paavo, are you here?" She called as she stepped inside.

Paavo: Perked up at the sound of his name being called, Paavo quickly stood from his daze and quickly went to investigate. When he saw his sister standing uncertainly, he smiled. "Ay Polly, this place really is something else," he greeted, joining her at the entrance. "How are you doing?"

Polly: shrugs. "It's.... New." She admits. "I'm still getting used to it. You fitting in well? Are the others nice?" She questions seemed serious, as she gave him a look and a frown, hoping he'd tell her the truth.

Paavo: laughs at her expression. "Easy there, I haven't really talked to anybody yet. Haven't seen'em, really. I won't lie, though, the room situation isn't too shabby." He jerked his thumb back to where the other campers rooms resided. "Have you seen your room, yet?" he asked.

Polly: She scowled playfully at him. "Not yet. Come on, check it out with me." She walks towards her room, glancing about as she walked. "Have you seen yours?" Polly turns to him. "Seems fairly empty. Guess this is a new cabin."

Paavo: followed at her heels, glancing at each and every open room until she found hers."That'd probably explain why nobody's home. Nifty." He quickly took a load off on her new bed, testing the comfortability. "My bed isn't as soft as yours, why is that?", he pouted.

Polly: She shrugs "Maybe it's a thing about me preferring soft beds." She chuckles. "Have you met any of our 'siblings'?" She questions, her tone indicating she didn't think of them like family. "I'm betting I'll miss our Village."

Paavo: raised an eyebrow at her tone and sat upright, crossing his arms. "Hey, I`m missing everybody as we speak, but I think this could be a change for us...a good change."

Polly: "A Forced change." She corrected. "Because we have nothing to return to." Polly sighs. "I'm just thinking that... We did this. We forced ourselves in this situation. But what if it's a mistake to be here?"

Paavo: casually got up from his resting spot to meet her eye-to-eye. He gently placed a hand on her shoulder. "Polly, if there's anything I can be sure of right now, it's that this is the best place for us right now." He gave her shoulder a squeeze at a thought. "Remember how lucky we are that we even got here?" he reminded her with a look.

Polly: She frowned at Paavo. "Lucky, with the other hundred demigods? Were were forced here. Our mother practically sent us here herself."

Paavo: "What would've been the alternative?" he countered, raising an eyebrow. "Before we met Josh, we were helpless. I may not care all that much for barely-around Volcano Mom, but we should at least count our blessings...it's just you and me now."

Polly: "Paavo, its always been just us. Just you me and Papa. Our village. Just.... us. But now we're surrounded by people we dont know and trust and I don't know what's gonna happen."

Paavo: sighed gently, but pressed on at a different approach. "You're right, we don't know what'll happen. That just means that we need to be prepared...trained. Didn't they offer us just what we need?" he reminded, looking at her through his uncannily curled eyelashes. He knew she hated when he looked at her like that.

Polly: Polly dares to stare back at him for a moment, pouting, before giving in. "Fine!" Polly replied eith exasperation. "But let's get something straight. These people aren't our family, and they'll never be our village. We're staying to train, but i refuse to make this my home."

Retrieved from "https://camphalfbloodroleplay.fandom.com/wiki/Archived_Roleplay:Main_Forum/General/Merc_and_Lissy?oldid=1797987"
Community content is available under CC-BY-SA unless otherwise noted.