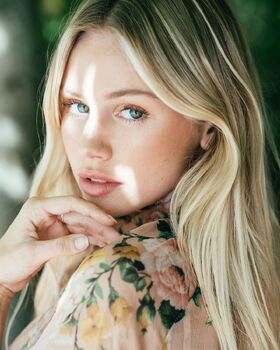 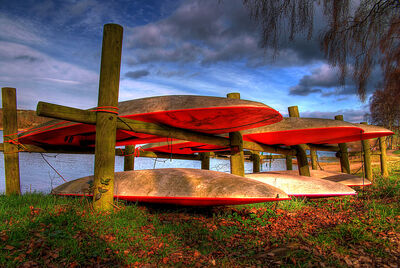 Scarlett: It had been days after their first encounter and Scarlett was currently making her way over to the lake, along with a few of her cabin mates - Canoing being an activity her cabin was doing for the day. Upon arrival, her cabin mates paired up with one of the Poseidon children, Scarlett only hoping she didn't get anyone rude or mean. The daughter of Mnemosyne wasn't sure who to pair up with and she wasn't exactly going to just walk up to someone so, instead she just stoof waiting to be paired.

Luc: He was a bit separate from his siblings as he had a smoke in his fingers (much to everyone's chagrin) but he extinguished it and placed the half smoke stick back into the packet upon seeing the blonde. He moved forward with his arms outstretched, as if looking for a hug, "miei campanelli," he said in perfect Italian.

Scarlett: As she had been looking the other way, Scarlett turned her gaze towards the sound of Luc's voice, seeing his arms outstretched. The demigodess slightly flinched but, attempted to hide it . "Oh hey Luc...." She said in a quiet tone as she gaze at the male.

Luc: He swung his arm around her and grinned down at her, "guess what!" he exclaimed and gestured to himself, "I don't have a partner and..." he trailed off to look around, "you don't either. It seems we are a perfect match every time! The fates are with us, I assure you."

Scarlett: Scarlett hadn't expected Luc to actually hug her so, when he did she tensed up. "Umm yea sure..." Was all she could say as she wiggled herself out of his embrace and looked towards a canoe that seemed to be free. "We could take that one." Scarlett gestured towards the canoe.

Luc: He followed casually with no care in the world. "We could, I'd recommend it," he said with an approving nod, "I'd advise you not to bother Bob, though," he warned her as he pushed it into the lake.

Scarlett: Scarlett strolled over to the Canoe and climbed into it, trying her best not to fall into the waer. Once inside she sat down and watched as Luc pushed the boat out into water. Finally as the duo floated out, Scarlett reached for one of the paddles and rested it onto her lap. "I have no idea how to do this...." Scarlett admitted while glancing over at the son of Poseidon.

Luc: He glanced over at her as he lay sideways on the boat, his shoes skimming the surface as his fingers trailed the water on the other side. A gentle current began to push them along, "good thing you don't have to do it, then."

Scarlett: She slghtly smiled before setting the paddle down on the floor of the canoe. "So are we just gonna sit here floating around..." She asked, her eyes wandering to the other canoes that were passing them by. "Everyones passing us." She smiled.

Luc: He shut his eyes as he laughed. The current pushed them faster and he said, "I didn't think you'd be the competitive type."

Scarlett: Her cheeks filled with a slight blush. "I'm not... but we look pretty ridiculous just floating around in circle." She laughed, only slightly noticing that they were beggining to move fast.

Luc: "We are not moving in a circle," he said indignantly, "fine, you tell me which direction to go and I'll tell the boat."

Scarlett: She just pointed in the direction that all the other canoe were heading. "Just follow the other canoe." She smiled before leaning out and reaching her hand into the water.

Luc: He did as she asked and the boat gently swerved, "is this meant to be a competition? I've never realised it," he mused.

Scarlett: Instead of responding to him, Scarlett only smiled before resting her arm on the side of the boat and resting her head onto her arm. Her left arm though dangled down into the water.

Luc: "Like your siblings?" He asked as he eyed her.

Scarlett: Her eye's wandered over to the son of Poseidon, looking directly into his blue eyes. "There ok... i don't really talk to any of them." She admitted before looking back to the water, and letting her hand fall down into it. "What about you?" She asked.

Luc: He grinned, "I think I'm a bit flippant for their tastes, they stay away from me," he chuckled.

Scarlett: A light giggle escaped her lips as she heard his word. "Maybe you should try to get more involved." She smiled.

Luc: He snorted at this, "heavens no, my hands are not meant to work," he said wiggling his fingers in the air. "They're meant to make love, not destroy it."

Scarlett: Scarlett giggled at his words. Since she had nothing else to say, The demigoddess allowed her eyes to wander around - noticing that most of her half sibling had gotten off the canoes. How long had they been out there on the water? Thity minutes? An hour? Honestly, scarlett couldn't tell but, she didn't mind since she was having a good time with Luc. "Looks like were the only one out here..." she voiced.

Luc: The boat swerved to head towards the beach, "would you like to go back?"

Scarlett: She thought about his question for a few seconds before shrugging her shoulders. "If you want, i don't really mind." She answered him.

Luc: "You must be rather bored of my company, so I suppose we better," he said and the boat turned to the shore.

Scarlett: "Your actually the first person here i can keep a conversation with." Scarlett admitted. "despite your annoy sudden outbursts." She joked with a small smile tugging at her lips.

Luc: He looked at her in surprise, "really?" He asked before making a face, "they're not annoying."

Scarlett: A light Blush filled her checks. "Don't let it get to your head." She replied before looking away, towards the shore. "And yes they are." She added on, taking a single moment to look back at him before looking back. 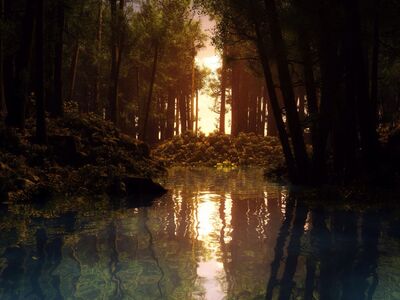 Scarlett: The sun was still high in the sky when a certain daughter of Mnemosyne found herself stand before the pond, located somewhere in the forest. She wasn't exactly sure why but, the water seemed to calm her when she was having one of her anxiety attacks - the water also calming her. While standing there, though, a soft breeze hit against Scarlett, causing her white dress and platinum blonde hair dance in the wind as she watched the still water

Luc: He descended through the trees, searching for the pond that had become his hideaway. As he began to enter the clearing, he jerked back biting back a curse. Someone had found it. Circling around the trees, he was only slightly relieved to find that he knew the person. On the other hand, it was even worse. He wasn't going to go back as it was a fair hike and his legs had begun to ache. He needed to stop smoking. At least whilst he was exercising. Eventually, he decided to just reveal himself. Play it off. Moving forward, he made his presense known by having the water shoot out at the girl in attempt to soak her.

Scarlett: As she had been watching the water so closely, Scarlett noticed the small movements in the water and was able to jump out of the way. Where did that come from? she thought to herself as she looked around, a bit scared it might be some sort of monster. Or maybe... No no it couldn't be - He was dead. the demigodess' breaths began to grow heavy as she thought of the idea of her past catching up to her.

Luc: He sighed as he came into the open, "you're too fast for me, I must try harder next time," he replied, "do forgive me, you looked rather hot so I thought you might appreciate cooling down."

Scarlett: Scarlett's head snapped n the direction of the voice, her eye's wide and her breathing still heavy. Once realizing who the person was, the daughter of Mnemosyne let out a sigh before letting her breathing calm down. "Luc... what are you doing here?" she asked while looking to the ground and waiting for his answer. She hadn't seen the boy in a while but, upon seeing him she immediately recognized him.

Luc: "Oh, I was just passing through," he said, running a hand through his hair, moving closer, "what are you doing here? Pushing curfew, don't you think?" He asked, eyeing the sunset. "Are you alright?" He went back to looking at her, "you seem to be a bit...ah...out of breath."

Scarlett: Her head moved in a nodding motion, her own gaze going to the sunset. "I'm fine... You just surprised me if i'm being honest." With the end of her sentence, Scarlett turned back towards Juc, Meeting his eye with her own.

Luc: "That's me, the master of surprises," he said with a snort, "I'd give myself only a six out of ten for this one, though."

Scarlett: A small giggle escaped her lips as she heard his response. It was then that she realized she never answered his question, quickly thinking of an answer before bringing it back up. "Oh and i'm just out here to get away from all the noise back at camp." Scarlett finally said, looking back to the water once doing so.

Luc: He nodded slowly, "fair enough, they can be rather loud," he said moving beside her, "unfortunately, you won't really be getting silence here anymore. I arrived."

Retrieved from "https://camphalfbloodroleplay.fandom.com/wiki/Archived_Roleplay:Main_Forum/General/Muse_%26_Time%27s_RP?oldid=1797981"
Community content is available under CC-BY-SA unless otherwise noted.