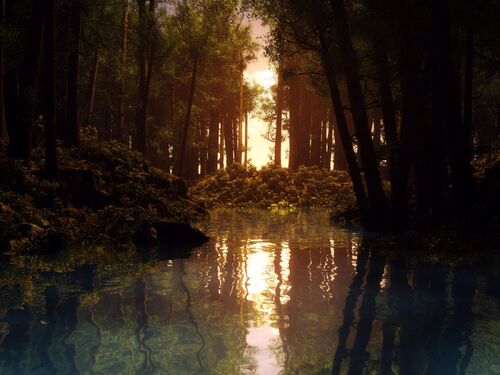 Sapphire: Sapphire stared at the still water as she waited for Connor to arrive. Usually Sapphire wouldnt agree to go swimming with anyone because of the 3 scars she had on her back from when she was beaten by her step-mother but, for some reason she didnt seem to care around Connor. Latley she had been thinking alot about him and having some very inapropriate dreams which he was in but Sapphire could figure out why. He was annoying, arrogant, and some times could be a bit of an asshole yet Sapphire couldn' seem to get him off her mind.

Connor: He was heading towards the pond, walking through the forest to reach Sapphire. He was now clad in his swimming shorts and had put on a pair of sandals and a T-shirr he'd later take off. Within a few moments, he managed to join her, gladly seeing that they were the only ones there, and that not even the naiads could disturb them. "Hey, I'm her-..." He got cut off for some reason by seeing her, in her particuliar attire, to which he quickly turned his head to advert his gaze elsewhere, lightly muffling his face with his hand in order to hide a blush. "Did I make you wait too long?" He blurted out, trying not to face her.

Sapphire: Sapphire who was looking at the water turned her attention to Connor. "Huh? Oh no i wasn't waitng for to long." She gave a soft smile while looking over his body. Sapphire then stood up in her purple two peice bikini and brushed a hand through her hair. She held up a bottle of sun screan and smile a bit nervously. "would you mind getting my back before we get in?" She asked walking up to Connor.

Connor: He met her gaze when she asked, his eyes widening a bit when she did. He felt like burrying his face in his hands, considering how much he'd been blushing. This wasn't really like him, as he would have made some cocky comment, but he was a little taken aback right now. "Uhm... Sure?" He muttered, rather red.

Sapphire: She smiled and handed him the bottle and turned around. "Thanks." As Sapphire faced the other way she smirking, She noticed Connor was madly blushing and she was kinda liking the fact that Connor couldn't make one of his famous cocky comments. Sapphire pulled her hair over her should so it wouldn't be in his way and waited for him to rub on the sun block.

Connor: He awkwardly applied the cream, not daring to say anything while doing so. He thought of how odd it was that they could act like friends even after the awkward things that had previously occurred. He finished putting it on hastily but in an efficient manner, passing her the bottle afterwards. "Done." He murmured, not making any eye contact with her. "So, let's swim, shall we?" He added, taking his shirt off on his turn and entering the water, awaiting for her to join him.

Sapphire: Seeing him take of his shirt and reveal his muscles made Sapphire begin to blush. She nodded her head and slowly climbed into the water and swam up next to him. "So do you like to swim?' She asked as she swam around the pond.

Connor: "I guess..." He muttered in her earshot, swimming in the whearabouts as well, having but not noticed her blush. "Not particularly, but it's enjoyable. But of course it must be a please for you as you get to see me in this all so heavenly form. "He teasingly added, faintly smirking.

Sapphire: Sapphire softly laughs. "yea because i just dream of seeing you shirtless." She said remebering her dreams then blushed. She then swam under water in hopes that he wouldn't see her blush. Once she resurfaced  she brushed her hair back and smiled.

Connor: Oblivious of her thoughts, he simply chuckled once and continued swimming everywhere. Suddenly, though, his path met with Sapphire's and he accidentally bumped into the demigod.

Sapphire: As Sapphire felt her body bump into his bare upper body her hand had rested on his abbs which was unknown by Sapphire. "Oh ummm sorry." she said looking up at him with a slight blush on her cheeks. Still oblivious to Sapphire her hand stayed rested on his abbs.

Connor: "It's fine." The sky had taken a yellow-ish taint, marking the beginning of sunset. He should have expected it though, as they had come to the pond in late afternoon. Connor gradually noticed the fact that she was touching her, which made him smile mischeviously. "Aren't you having fun?" He insinuated, subtly gesturing her hand.

Sapphire: As she looked to his stomach area and saw her hand she quickly removed it. "Oh sorry..." She said blushing even more. "I didnt realize my hand was there." Sapphire looked away from Connor in attempt to hide her blushing but it may not have worked. She brushed a strand of hair behind her ear as she tried to avoid making eye contact with him.

Retrieved from "https://camphalfbloodroleplay.fandom.com/wiki/Archived_Roleplay:Main_Forum/General/_Muse_and_Wave%27s_RP?oldid=1584997"
Community content is available under CC-BY-SA unless otherwise noted.