Connor and Rose, The Pond 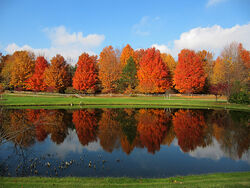 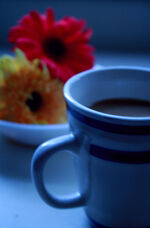 The Path to Camp 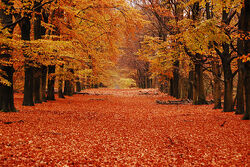 Swimming Time at the Lake :D 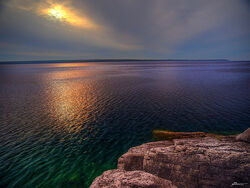 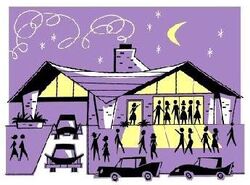 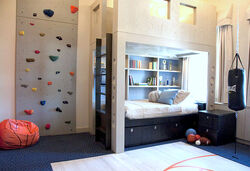 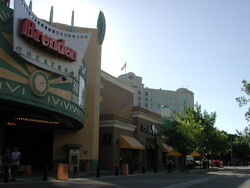 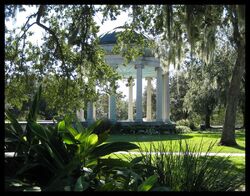 Rose: She was in the park dribbling her lucky basketball while trying hard not to think hard of Connor.

Connor: It was lazy a somewhat lazy afternoon when Connor decided to get out of camp for a change. He decided to go to the nearby town's park and take a light stroll.

Rose: She found a small bench and decided to rest. She sat down and dug into her bag, she found her notebook and looked over her unfinished song. No one knew this but Rosetta was a singer and sometimes she would write some songs and sing them for her own entertainment.

Connor: He walked past the bench, not recognizing Rose.

Rose: She didn't see Connor because she was still writting lyrics and was deep into her work.

Connor: He did a double-take, realizing that Rose sat on the bench. Not wanting to distract her, he simply joined her, taking a seat in silence. Out of the corner of his eye, he saw her lyrics.

Rose: She saw someone stare at her and turned to see Connor, furious she blushes red and hides her notebook.

Connor: He blushed as he had seemingly made her uncomfortable by signaling his presence. "Eh... Sorry." He awkwardly apologized. "You sing...?"

Rose: She scowled at him and didn't answer him.

Connor: He didn't get why her tone was so sharp. Was she angered by him? "Why such a bad mood?"

Rose: Glaring at him, she grabbed her notebook and quickly dashed away.

Connor: He stood there, more confused than dazed, watching her leave. Not for long, he thought, as he began running after her pursuit.

Rose: She started running and looked behind her to see Connor.

Connor: He ran after her, trying not to loose her. Her bumped into a few people, not bothering to stop and apologize, as he would loose some time. The things he did because of a girl... He eventually began catching up to her.

Rose: She eventually stopped and spun around to face Connor. "What do you want?" She sighed.

Connor: He briskly stopped running, catching his breath. Never get in a race with a child of Nike. He thought, finally gaining himself. "Why do you always run away?" He asked, almost seeming hurt, but managing a grim expression.

Rose: "Y-You saw my book..." She put a protective hand around her notebook.

Connor: He nodded, "Your lyrics are great. I don't know why you're so worried about me seeing them."

Rose: "A child of Nike should be playing sports not writing deep music like those Apollo kids." She said with a frown.

Connor: "You're not just some random child of Nike." He retorted, unbearing to hear her underestimate herself.

Rose: "Please, all my half-siblings would laugh when they hear that I sing!" She was half-way to tears. "Please don't tell anyone!"

Connor: He reluctantly wrapped his arm around her, seeing that she was about to crack. Physical contact seemed to be the only way he could try to comfort her. "Don't worry, I won't." He promised, his voice whispering into her ear. "But it means anything, you're lovely either way. Talented in every way."

Rose: "Thank you Connor, y-you're the best…" She dug her face into his arm. "Um.. Connor I-think I-I might have e-r feel-" She cut herself short and awkwardly blushed.

Connor: Hearing her words, she gave her a kiss on the cheek, connecting their foreheads. "I love you." Three words. Three words that he had never told to anyone but her.

Rose: "You have no idea how long I've been waiting for those words…" She muttered to him.

Connor: He smiled to himself. "I think I can imagine." He said, hugging her tightly.

Rose: She hugged him also and stared at the sky. "So.. what now?"

Connor: She faced her. "It depends. Will you give me the honor of having the title as your lover?"

Rose: She reached down low and grabbed a long stick off the ground. With her right hand she lightly uses the stick to tap Connor's right shoulder. "The honor is now yours, Lover Connor."

Connor: He chuckled. "Times like these, I wish I could be a horse nymph." He randomly said. "You could take me on... Rides."

Rose: She gave him a strange look. "I happen to know a horse nymph..."

Connor: He plastered a playful grin on his lips. "I bet you wouldn't ride her the same way." He joked, obviously not actually meaning it judging by his tone.

Rose: She rolled her eyes at him. "Oh Connor."

Connor: He sheepishly smiled at her, soon taking both of her hands into his grasp, holding them with delicacy.

Rose: She smiled deeply at him and felt that they were the only ones in the universe.

Connor: "The upside is that now, you won't be having to watch movies on Netflix alone anymore."

Rose: "Yeah." She smiled at him. "We could watch Titanic everyday!"

Connor: He managed a fake, ridiculous grimace as a reaction. "Oh gods."

Rose: She grinned. "So Connor what do you think about Pizza hut?" She pointed to her belly and rubbed it. "I'm so hungry right now!"

Rose: She kissed him on the cheek. "Well duh!"

Connor: He grinned like an idiot. "Then let's go then."

Connor: He was sitting at a table for two in the back of the hall, their food resting on the table.

Rose: She slurped her bowl of spagehetti while staring at Connor.

Connor: He took a large bite out of his slice of pizza, noticing her stares, which he deeply returned. "You know," she started saying in attempt to start a conversation, "I hope you won't have any boys around your room anymore." He joked semi-serious, referring to their previous experience.

Rose: "Please.." She giggled. "The only boys who hang around her room are my half-siblings" She twirled her fork in her pasta.

Connor: "Good, I don't want any young men around my girl's bed in the middle of the night." He mimicked the tone of a father, failing, as the outcome looked like a cranky man's voice, but the goal was perceivable.

Rose: She laughed so hard she almost choked on her pasta. "You know you talk just like my father before he died."

Connor: He was unacknowledged of the decease of her father, but decided it would be best not to abort the subject. "I try my best." He said with a sheepish grin.

Rose: She smiled deeply at him while trying not to choke on a piece of pasta and decided to switch to pizza. Chewing her piece daintily she curiously asks. "Say Connor, what was life like at Olympus?"

Connor: He took another bite out of his pizza, chewing it, afterwards shrugging. "There were a lot of... Parties. And nymphs. I met the muses once, but not for long. I mostly stayed on earth though, with the hawks."

Kane: Gtg for an hour

WoW: Could a hellhound attack Rose? So he could save her or something?

Kane: IS IT TIME?

WoW: Time for what?

WoW: I got what you were saying, but I don't think it's quite the time yet. Anyways, could she insist on him drinking or something?

Retrieved from "https://camphalfbloodroleplay.fandom.com/wiki/Archived_Roleplay:WoW_and_Kane%27s_Lovely_RP_Times?oldid=1503002"
Community content is available under CC-BY-SA unless otherwise noted.