Ares was the great Olympian god of war, battle lust, civil order and manly courage. The son of Zeus and Hera, he is the brother of Enyo, Hebe, and Hephaestus. He was given the name Mars by the Romans, who additionally associated him with agriculture. His symbols include the boar, dog, serpent, spear, sword, and vulture.

He developed a love of violence that surpassed that of any other Olympian, but made him perfect as the Olympian god of war. It also made him unpopular among his fellow deities who despised him for his overt love of war regardless of reason to fight. Despite this he was given a place on the Olympian ruling council possible due to his parentage.

As the God of War Ares would often participate in mortal conflicts, but would often fare poorly in divine contests. He would lend strength to whatever side he favoured, but was known to be somewhat fickle and change sides in the middle of a battle. Despite his great strength and fighting ability Ares often fared poorly in battles with other supernatural enemies. His half-brother Heracles is noted to have stalemated if not outright defeated him in battle twice. At one point he stripped Ares of his armour and another defeated Ares and one of his children with the aid of Athena. The Alodai giants defeated Ares and imprisoned him within a jar. 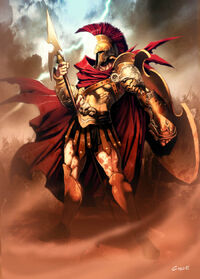 During the Trojan War he sided with the Trojans despite promising Hera he would aid the Greeks. For his actions he was wounded by the mortal hero Diomedes with the aid of Athena. After Zeus allowed the Olympians to participate openly in the war he challenged Athena directly only to again be defeated and force to flee. 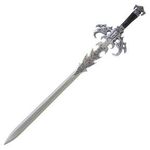 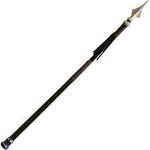 Possesses the natural abilities of a God in addition to having vast physical strength and the minor ability to control fire. As the personification of war, he is an expert in all areas of warfare. He owns a magic war chariot that can transform into different modes of travel including a motorcycle (his preferred form) and a German Panzer. One of his most notable possessions is his magical spear that can turn into various weapons. He also has the ability to invoke feelings of anger, passion and violence in others.

He is Aphrodite's lover, and has been for millennia. Her husband Hephaestus once caught them together in a golden net of his own design, and invited the gods to come and laugh at their affair. Hephaestus seems to enjoy inventing new ways to humiliate them, so Ares and Aphrodite pick the locations for their dates very carefully. Aphrodite also loves Ares more than Hephaestus and has many children with him. His demigod children all have the same cruel, aloof, and rebellious attitude as he does.

Retrieved from "https://camphalfbloodroleplay.fandom.com/wiki/Ares?oldid=1569596"
Community content is available under CC-BY-SA unless otherwise noted.