Start a Wiki
Αριάδνη
Ariadne won the God/Goddess of the Month Poll competition for February 2013. 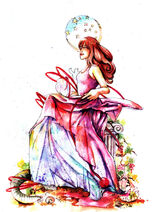 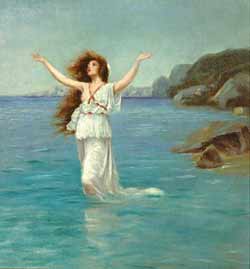 Ariadne (Αριάδνη in Ancient Greek) was a princess of Crete, daughter of the evil King Minos and his queen, Pasiphaë. She is most commonly known for helping the demigod hero Theseus get through the original Labyrinth in Ancient Greece. She became the immortal wife of Dionysus after Theseus abandoned her. Her Roman counterpart is Ariana.

Ariadne was the young daughter of King Minos, and she knew that he was evil, and that it was wrong to sacrifice people to the Minotaur.

Ariadne fell in love with Theseus the first time she saw him, and desperately wanted him to live. She agreed to help him. Theseus was brave, kind, and handsome. He promised to marry her and take her with him back to Athens if he lived, and she gave him a sword and a ball of magic yarn.

After those methods failed him, she used her ability to see through the Mist, to guide him through the maze safely, enabling him to kill the Minotaur.

Before King Minos could stop them, they all got back on their ship and sailed away, this time with Ariadne, Theseus' arm wrapped around her as they left Crete forever. 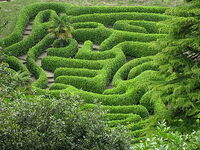 After they were out to sea, it is said Theseus grew bored of Ariadne. It isn't known why, or what caused this. Maybe he didn't like her at all, and resented her for making him take her away, even though he owed it to her, as she had thrown everything away to save him and his friends.

They stopped at the island of Naxos, and Theseus had an idea. He didn't want to have Ariadne for a wife, so he would simply 'dump' her, and go home to Athens without her, and he would never be bothered with her again. It must have seemed like a good plan (for him), however cruel, because he carried it out.

So that night, when they were sleeping on Naxos, Theseus woke up the crew, and didn't wake Ariadne. He let her sleep, and they set sail without her, leaving behind the beautiful girl that saved their lives. Dionysus later found her, crying and weeping for Theseus. Dionysus fell in love with her, and they married.

Another account says that they let Ariadne sleep ashore because of her seasickness, and a storm drove them away from the island and broke their mast. They were then forced to go to Athens both to repair the mast and to reach home. In this version, Theseus forgot to change the masts because of his worry for Ariadne. Later, when he returned to the island, he could not find Ariadne.

In another version, Theseus left Ariadne because she was awfully sick and he was going to go get medicine, but when he came back, she was gone. (Possibly because Dionysus married her)

In yet another version, Theseus and his crew were sleeping on the island. Theseus loved Ariadne, but so did Dionysus as he watched the beautiful maiden. He whispered in Theseus's ear while he was sleeping to leave her on the island because he loved her. Unwillingly, but unable to refuse a god's wishes, Theseus set sail while she was sleeping. 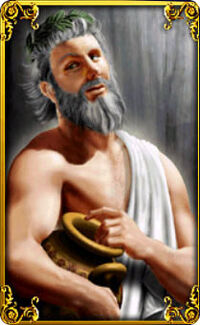 Ariadne awoke, and she was alone. She looked around, and ran along the beach, calling for Theseus. She saw the sail on the horizon, and she knew that he had left her there. She collapsed on the ground, and sobbed. While she was on the ground, she cursed Theseus, and pleaded to the gods to make him forget to change the sails from black to white. They answered her pleas, and Theseus' father Aegeus threw himself off his castle roof, into the sea and drowned.

In other tales, Theseus was so grief-stricken at losing his beautiful bride, he forgot to raise the white sails.

Dionysus was the guardian of the island of Naxos, and came upon Ariadne when she was still weeping. He comforted her, and was determined to make the poor girl happy again. Over time, he healed her broken heart, and they got married.

With Dionysus, she was the mother of Euanthes, Oenopion, Staphulus, Thoas, Latramys, and Tauropolus. Her wedding diadem was set in the heavens as the constellation Corona.

She remained faithful to Dionysus, but later died, and her sons became kings of various cities and islands. They were fine without her, but Dionysus was not.

Dionysus then descended into the Underworld and brought her and his mother Semele back. They then joined the gods in Olympus, and Ariadne was made a goddess. 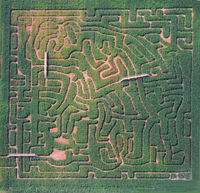 Retrieved from "https://camphalfbloodroleplay.fandom.com/wiki/Ariadne?oldid=1470880"
Community content is available under CC-BY-SA unless otherwise noted.