Start a Wiki
Αρισταιος
Aristaeus won the God/Goddess of the Month Poll competition for August 2013. 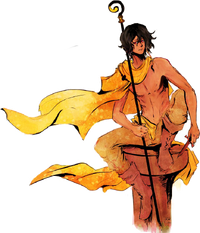 Aristaeus was the woodland god shepherds and cheese-making, bee-keeping, honey, honey-mead, olive growing, medicinal herbs and the cool Etesian winds. Apollo met and was smitten with Aristaeus' shepherdess mother, Cyrene after seeing her fighting against a lion. In his lustful state, he spirited her away to Libya where she beget Aristaeus. Cyrene founded a city that beared her name and later an entire nation, Cyrenaica.

Aristaeus was raised by Hermes and Gaia and by making him drink nectar and ambrosia, they made him immortal. The Horai and the nymphs taught him art of the mysteries, how to curdle milk from cheese, to tame Gaia's bees and keep them in hives and how to tame the wild oleaster and make it bear olives. He taught mankind the use of nets and traps in hunting.

He traveled from Libya to Boeotia where he learned further mysteries of the earth with Chiron. He sailed around the Mediterranean and even at some time ruled over Sardinia to spread his cult and introduce mankind to his newly-found knowledge. He later married Autonoë, the daughter of Harmonia and Cadmus and became the father of Actaeon, who suffered an unfortunate fate being torn to shreds by Artemis and Macris, the nymph who nursed the infant Dionysus and was banished by Hera in her fury.

Aristaeus and the Etesian Winds

Aristaeus' presence and worship in Ceos was attributed to a Delphic prophecy that counselled Aristaeus to sail to the land, where he would be greatly honored. The islanders were under the baneful effects of the dog-star Sirius. Aristaeus countered the deadly and terrible effects of the Dog-Star by sacrificing to Zeus and brought the relieving Etesian winds to Ceos.

Aristaeus and the death of Eurydice

Aristaeus was the cause of Eurydice's death in the tale of Orpheus. He gave chase to the young nymph who stepped on a venomous snake killing her instantly. The nymphs in retaliation cursed Aristaeus' bees to die. He went to the fountain of Arethusa and was advised to establish altars, sacrifice cattle and leave their carcasses. From the carcasses, new swarms of bees rose.

Retrieved from "https://camphalfbloodroleplay.fandom.com/wiki/Aristaeus?oldid=1572561"
Community content is available under CC-BY-SA unless otherwise noted.