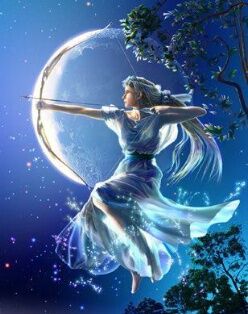 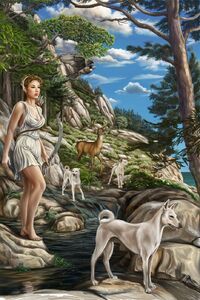 Artemis is the virgin goddess of the Hunt, the Moon, maidens, virginity, childbirth, animals, wildlife, hills, and "The Guardian of Children" (as some resources portray her). Her Roman counterpart is Diana. She is the daughter of Zeus and Leto and is the full-blooded sister of Apollo and a half sister to Athena, Aphrodite, Hermes, Ares and Dionysus. She and Apollo are known as the "Twin Archers". Artemis' handmaidens are chaste maidens who have turned their back from the company of men and have taken a pledge, if Artemis accepts, then they will be part of the Hunters, and will become immortal and serve her, most especially during a Hunt.

Artemis was the firstborn child of Zeus and Leto. Her mother was forbidden by a jealous Hera to give birth anywhere on the earth but the floating island of Delos provided her much needed sanctuary. Immediately after her birth, Artemis helped her mother deliver Apollo for which she is called a goddess of childbirth.

When she was three years old, Artemis asked her father to grant her a wish. she desired (among other things) a silver bow and to take a vow of chastity. She held a passion for hunting and wanted to roam the wilderness forever. As he held a special pride for his daughter, Zeus granted her wish. He also allowed the young goddess to rescind her oath whenever she wished.

Artemis once came near to retracting this oath when she met the handsome huntsman, Orion. As they slowly fell in love, Orion made a boast that he could kill any beast on earth, provoking Gaia into sending a scorpion to kill him. When Orion was slain by the scorpion's sting, a grieving Artemis blamed Apollo who had been jealous of Artemis' infatuation with the giant. To honor her beloved, Artemis sent both Orion and the scorpion into the sky as constellations. Ever since, Artemis has never been attracted to another man.

Many stories were told of Artemis defending her virginity from others. Many such as the giant, Otus tried to seize her for his wife. Other such as Actaeon were punished for seeing her nude form. Many of Artemis' myths placed her in the role of an avenger. She is said to have caused quick deaths to her victims with her arrows. 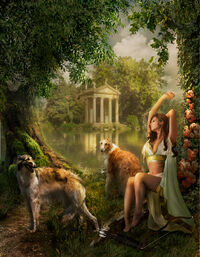 As the goddess of the hunt, Artemis probably possesses advanced hunting abilities such as speed, precision and the ability to disguise herself along with many other powers. She was strong enough to go toe-to-toe with the greatest Titan warrior Atlas.She can also transform people and objects into things associated with hunting (e.g. once she turned a helicopter into a flock of birds). Because the hunting of wild beasts is within her domain, Artemis is able to help heroes more directly than other gods by saving them from powerful monsters if she wishes. She utilizes this loophole to bypass the ancient laws against direct interference.

She may also have unspecified moon-related abilities, as she is also goddess of the moon. She possesses a silver chariot similar to Apollo's sun chariot, but it seems to be purely for travelling in short distances.

Artemis presumably possesses the standard powers of a God.

As the goddess of the Hunt, she can probably replenish the animals she shot. 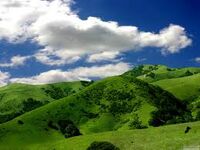 Retrieved from "https://camphalfbloodroleplay.fandom.com/wiki/Artemis?oldid=1600176"
Community content is available under CC-BY-SA unless otherwise noted.