Ashe is described as cocky, flirty, and childish to a point where he's downright annoying. He tries to use his cuteness to get what he wants and basically flirts with anyone to make people jealous if people take an interest in him. Ashe is also kind to others, but can't show it to others without flirting. Sometimes, he can can be overzealous and a bit of a show-off.

If he truly cares for someone, Ashe will show signs of compassion and protectiveness, caring for his loved ones and trying to protect them. If he fails at protecting someone, he'll get angry at himself and punish himself as a result, which is a bad habit. He'll do anything to make his loved ones happy. When upset or angered, Ashe will refuse to speak, being the stubborn child he is, and will not speak until the latter apologizes. To calm himself down, he usually takes a walk or shower.

Ashe is also known for a high alcohol tolerance, able to hold his liquor well. He is also rambunctious and occasionally sassy, making snarky remarks or comebacks. He doesn't let words get to his head easily. Ashe would wipe it off with sarcasm and sass. As result, he laughs in the face of others who try to downgrade him, since Ashe has a rather large ego.

When sad or depressed, Ashe would bottle it up, refusing to show and hint of sadness, masking it with fake glee or staying monotone. When finally alone, he breaks down in secret, refusing to let anyone see him - probably even to his own brother. Ashe hates it when people see the soft side of him since he's usually well kept of himself.

Ashe has his platter of talents - talents that he hasn't showed to anyone else but the people closest to him. He always had a passion for singing, but really only sings to close friends, family, lovers etc. Ashe enjoys listening to music that he finds interesting, trying to sing along with the lyrics and wanting to show off - as per usual.

On the 11th of January, Seol Jae-wook, a 25 year old living in Daegu, South Korea decided to go adventuring, looking for a one night stand. Nothing more, nothing less. And thus, dressing nicely, Jae-wook began to set out to find any good looking man, woman, didn’t matter. Wandering the streets for a while, Jae-wook found 2 beautiful, young ladies entering a nearby club.

Taking an interest, Jae-wook went into action. Once successfully making it inside the club, the young man began scouting for the young ladies and once finding the duo, he began to introduce himself and get to know the girls. One girl had pale, porcelain skin with dark eyes. Her long hair was what stood out the most; the left side was black while the right side was white. The other girl had healthy, olive skin with light eyes and medium brown hair. A couple hours of talking and persuading, one girl wouldn’t leave without the other, Jae-wook decided to take both girls home. Never, in his life, Jae-wook would expect something like this, but he liked it. Once arriving in Jae-wook’s apartment, the 3 immediately got intimate with each other.

Although Jae-wook didn’t exactly remember what happened specifically after that, around 4 months later, a knock on his front door surprised him. At his doorstep was a basket with 2 children inside and a note attached to the basket saying something along of the lines of:

“Dear Jae-wook, if you remember the women you slept with around 4 months back, they were the goddesses Melinoe and Persephone. I understand that this is quite burdensome, but the children in basket are yours. I’m sorry it had to be this way. Please take good care of your children. Sincerely, Melione and Persephone”

Running a hand through his hair, Jae-wook thought about it and decided to take responsibility of the children in the basket. For the first 3 years of Jae-wook’s children’s lives, one boy named Bong-Gyoo and another boy named Hyeong, the two boys were attached at the hip. Wherever one went, the other followed thus causing concern for some parents. The siblings also went through a “Mine” phase. Whenever a child got too close to one of the siblings, the other one would grab onto them and tell the other child, “mine”. It concerned Jae-wook, but considering their age, Jae-wook merely thought it was a phase. Oh, how wrong he was.

During the course of the years, the Seol siblings never left each other’s sides and refused to go anywhere without the other, which often caused some teasing from the children. At home, the siblings would be a little more touchy with each other, hugging often, innocent kisses on the cheek, etc. which Jae-wook didn’t like very much, but didn’t put much thought into it, telling himself it was a phase. The two would always seclude themselves from any other kids, focusing on each other and their growing affection for each other, even giving each other cute nicknames. Hyeong’s nickname for Bong-Gyoo would be Bonggie and Bong-Gyoo’s nickname for Hyeong would be Hyeonggie.

As much as the children enjoyed their bliss and company, around age 11, as the two were playing in the park and Jae-wook was trying to discuss about his children to other parents, Hyeong ran head first into a suspicious and large dog, causing Hyeong to scream in terror. Jae-wook turned his attention to his sons, face to face with a vicious looking dog and Bong-Gyoo grabbing him, pulling him away from the dog. Jae-wook immediately sprang into action, grabbing his children and rushing them back home. Jae-wook didn’t stick around long enough to know what exactly happened to that dog, that hellhound, but he didn’t care. The only thing on his mind was to protect his children. What happened to the hellhound? The hellhound tried to chase after the duo, but was stopped by a demigod and, was eventually, killed.

Uninformed to the siblings, Jae-wook had planned for months about moving to the states where he thought it’ll be better for, not only his sake, but for his children’s. Now, not only were other kids bullying and harassing the siblings, but now rabid dogs attacking his children? This became too much for Jae-wook, and about a month later, Jae-wook packed up everything and moved to New York, in an apartment complex in a rather uneventful neighborhood not far from the school.

Ever since the incident with the hellhound, the two were even more stuck together since they were afraid of the same thing happening again. Once arriving to the states. Jae-wook managed to change their names legally, as if he didn’t want to be reminded of his time spent in Daegu. Jae-wook became Phoenix, Bong-Gyoo became Orso and Hyeong became Ashe. The siblings, although it’ll take time for them getting used to their new names, seemed to like it but didn’t stop them from using their birth names and nicknames for each other when alone. Unfortunately, a monster attacked them every year, but managed to escape, either hiding or running and managing to outrun the monsters.

At age 14, after narrowly escaping another monster attack and finding shelter in their own home, it wasn’t until a few minutes passed that the siblings realized that they were home alone. Growing up, they only had each other, so being uncomfortable around each other wasn’t a problem. But weren’t siblings suppose to fight? Why didn’t they? Was it because they felt something a little more than just being siblings? Well, it wasn’t until they brushed lips that something just felt… right. Once they started, they couldn’t stop. It wasn’t until the sound of the door opening and their father shouting that he was home that they pulled away, but they both decided that they really enjoyed it and it wasn’t going to be the last time they did that.

Since then, the two became closer and refused to be with anyone else, clinging onto each other more than usual. The school that they attended was a private school, and the fact the two never left each other’s side, they weren’t exactly accepted with the other kids. They were often teased about how close they were and how much time they spent together, but the siblings really didn’t care. Their father was still concerned about how close they were, considering they never really acted like normal siblings, but it’s been going on for so long now that their father just saw it as normal behavior. Aside from that, with each passing year, the two were chased down by ravenous monsters. Luckily, they didn’t seem to follow them for very long, as long as they stuck together, that’s all that mattered.

Things really changed when they were 16. It was no secret that these two felt something than just being brothers. But, Orso was sick of all the fluffy, cutesy stuff, so he planned on changing their relationship for good. Once night fell, as the sibling were still up and their father had gone to bed, Orso’s plan started as fluffy and innocent, but quickly became much more intimate and extreme and led to sex. Orso seemed to love it while Ashe, although enjoying it, had mixed feelings about it. He didn’t know his exact feelings for his brother and was confused and conflicted. Nevertheless, neither one of them regretted it.

A year later, the Seol brothers weren’t rather acquainted with the city since they didn’t venture outside often, so they decided to explore. With a bit of wandering around in their neighborhood, , a small group of demigods led by a couple of nymphs and satyrs were on their way to camp when a satyr caught their scent. Breaking from the group, the satyr continued to follow the scent and found the two. The duo were confused when the satyr said they, “caught their scent”, so she explained that they were demigods and they weren’t safe out in the open.

Before either sibling could ask, “why”, a giant scorpion appeared. The saytr ordered they were to follow her. They ran and luckily, the group of demigods weren’t too far. As the saytr began taking the new demigods to camp, the nymphs and elder demigods stayed behind to kill the scorpion. Once arriving at camp, and out of breath, the siblings were claimed by Melinoe and Persephone. 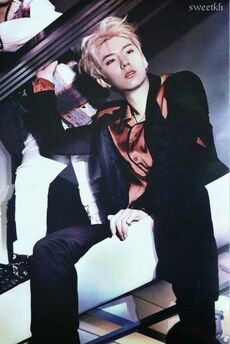 Retrieved from "https://camphalfbloodroleplay.fandom.com/wiki/Ashe_Seol?oldid=1802421"
Community content is available under CC-BY-SA unless otherwise noted.