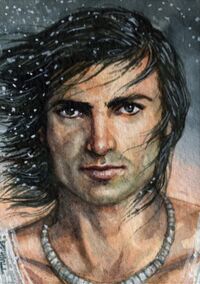 Astraeus is the Titan god of dusk, stars, planets, and the art of astrology. He is the son of Krios, Titan of constellations and Eurybia, Titan of the forces of the sea. His brothers are Pallas (warfare) and Perses (destruction). By consorting with Eos, Titan goddess of dawn, they bore the wandering stars (Astra Planeta) and seasonal winds (Anemoi). Together as nightfall and daybreak they produced many children who are associated with what occurs in the sky during twilight. The stars are Stilbon, Hesperos, Pyroeis, Phaethon, and Phainon. The winds are Boreas, Notus, Zephyrus, and Eurus. The arrival of these Winds was heralded by the rising of certain constellations. Astraeus also had a daughter named Astraia (or Astraea), the goddess of the constellation Virgo and justice.

Astraios' name appears with those of other Titanes in lists of Gigantes who made war on the gods, which suggest he played some role in the closely related Gigantomachy and Titanomachy Wars. He is also sometimes associated with Aeolus, the Keeper of the Winds, since winds often swell up around dusk.