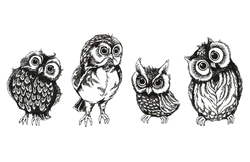 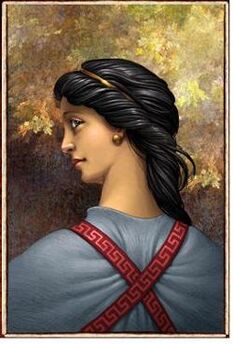 ❖Vital Statistics❖
❖Family❖
❖Scopes/Patron of❖
❖Other❖

ATHENE (or Athena) was the great Olympian goddess of wise counsel, war, the defence of towns, heroic endeavour, weaving, pottery and other crafts. She was depicted crowned with a crested helm, armed with shield and spear, and wearing the snake-trimmed aigis cloak wrapped around her breast and arm, adorned with the monstrous head of the Gorgon.

The more famous myths featuring the goddess Athene include:

In Greek mythology, Athena is the goddess of arts and battle. Daughter of Zeus, and only by him, the Goddess Athena was not generated by any woman. She leaped from the head of Zeus, already adult, dressed with her armour. But the mother is not completely missing from the miraculous birth of Pallas Athena. According to Hesiod's account of the weddings of Zeus, the King of the Gods chose Metis as his first wife. She was of all beings "the most knowing" (as the word metis is interpreted), or "of many counsels" as translated in the sense of the Homeric epithet polymetis.

As she was about to give birth to the Goddess Athena, Zeus deceived his pregnant wife with cunning words and assimilated her into his own body. Mother Earth and Father Sky had advised him to do this so as to prevent any of his descendants from robbing him of his kingly rank. For it was destined that the most brilliant children were to be born to the Goddess Metis: first, the daughter Athena, and later a son, the future King of Gods and men.

In the most ancient account, the Iliad, Athena is the Goddess of ferocious and implacable fight, but, wherever she can be found, she only is a warrior to defend the State and the native land against the enemies coming from outside. She is, above all, the Goddess of the City, the protectress of civilized life, of artesian activities, and of agriculture. She also invented the horse-bit, which, for the first time, tamed horses, allowing men to use them.

She is the favourite daughter of Zeus; and that's why he let her use his insignia: the terrible shield, the aegis and his devastating weapon, the ray. The most used expression to describe her is "the bright eyed". She is the first of the three virgin Goddesses, also known as Maiden, Parthenos, and from this name was taken the name to the most important Temple dedicated to her, the Parthenon. In poetry she is the incarnation of Wisdom, Reason and Purity.

Athena is the Greek word for . She had many temples spread accross Ancient Greece, the most famous being Athens, the capital of the Greek Empire. Her temples were holy ground and people came from miles to worship at her feet. She had many cults dedicated to her image but the most famous are Phokis, Malis, Thessalia, Keos, Khios, Samos and Krete.

In Roman mythology Minerva she virgin goddess of wisdom, poetry, medicine, commerce, weaving, and crafts and is much less powerful than her Greek version. 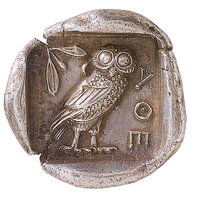 Previously the Goddess had already shown particular benevolence to the land of Athens. In the days of King Cecrops a dispute had arisen between her and Poseidon for the possession of Attica. To affirm his rights Poseidon struck the rock of the Acropolis with his trident and a salt water spring gushed forth. According to another tradition it was a horse which appeared under Poseidon's trident. Athena, in her turn, caused an olive tree to sprout on the Acropolis, a tree which could be seen in the time of Pericles, still alive in spite of having been burned by the Persians during the invasion of Xerxes. Asked to settle the dispute the Gods, on the evidence of Cecrops, pronounced in favor of Athena.

The manner in which Athena made her first appearance revealed her warlike proclivities. And, indeed, she delights above all in battle. She took part in the war against the giants, killing Pallas and hurling her chariot against Enceladus whom she finally crushed under the island of Sicily.

We find her again, equally belligerent and ardent, in the battles which raged beneath the ramparts of Troy. Not satisfied with stimulating the ardor of the Greeks - whom she favoured - she entered the skirmish herself. She put on her head a helmet of gold with jutting crest vast enough to cover the foot-soldiers of a hundred towns. Over her shoulder she slung the aegis which she had fashioned, according to some, from the skin of the giant Pallas or which - as was more generally held - was made from the hide of the goat Amaltheia. Zeus had used it for the first time during the war with the Titans and afterwards presented it to his daughter. It is a sort of cuirass or breastplate, fringed and bordered with snakes and bearing in the center the horrifying head of the Gorgon. Thus armed, Athena mounted on to the chariot of Diomedes, seized the whip and reins herself, and flung the horses against Ares, whom she stretched on the ground with a blow of her spear.

The memory of Athena's warlike prowess was perpetuated in Libya in annual festivals during which girls, divided into two camps, would stage a furious battle with sticks and stones.

As far as gods go, Athena can be very sympathetic: once, a man saw her bathing, she blinded him, but then sent snakes to protect him and gave him supernatural powers to see the future, amongst other things.

Athena is a very disciplined, quick thinking, and wise goddess. She is very brilliant and always takes precautions before acting. Percy notes in The Titan's Curse that Athena might be the worst enemy someone could make, even among the gods, as she would never give up or make a rash mistake simply because she hated you. She loves all of her demigod children, and seems to be a caring mother. She is the only known god who claims her children at birth. She gave her daughter Annabeth the gift of a cap that turns the wearer invisible. In one of Percy's dreams in The Battle of the Labyrinth, she is shown to have blessed both Daedelus and his young nephew Perdix. She later punishes Daedalus for killing Perdix by branding him with a partridge (the mark of a murderer).

Athena is also usually kind to other demigods. She often aids heroes on their quests, even helping Percy at one point while he was in the Hoover Dam. Athena is somewhat cold and calculating at times. She voted against letting Percy live in The Titan's Curse, because she didn't want to risk him staying alive. Athena is also known for never giving up, and crossing her is a mistake. When Paris picked Aphrodite as the most beautiful goddess instead of her, Athena took the side of the Greeks in the Trojan War and used every power within her to bring him down. In the book, Athena is seen as a strict and proud goddess. In The Lightning Thief (movie), she is less strict and didn't show any sign of not liking Poseidon or Percy. She even states that "War is not the answer". This is perhaps a little paradoxical, as she is a goddess of war. However being the goddess of strategy, she knew that a war between the gods was not the answer and would only lead to unneeded sacrifice.

Athena has long hair and intense gray eyes, as described when Percy sees her, and nearly mistakes her for Annabeth. As she is a goddess, she can turn to any form she would like so she will not always look like that. As shown in The Titan's Curse, she is shown as an average looking Park Ranger at the Hoover Dam. She is said to be beautiful and lean. She wears an elegant white dress. It is said Annabeth looks a lot like her mother, and has the same cold stare. In some myths she is said to be able to turn into a white owl. In The Titan's Curse, she is seen with black hair. She is also said to be one of the most beautiful goddesses since many men fawn over her but she uses her powers to do horrible things to them if they do not leave on her first warning. Because of this, she gets along with Artemis well, being seen having similar personalities and often conduct conversations. 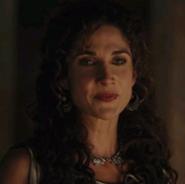 Add a photo to this gallery
❖Abilities❖

As a daughter of Zeus, Athena is an extremely powerful goddess:

Retrieved from "https://camphalfbloodroleplay.fandom.com/wiki/Athena?oldid=1570141"
Community content is available under CC-BY-SA unless otherwise noted.