The proverbial princess of the Salvatore empire, and the heir to the D'Amore Crime Family, August gets what he wants. He loves attention and does whatever he can to gain it. A lot of August's personality seems to be swayed by his step-mother, a very strong woman with very modern points of view. He’s flirtatious, charming, and rather talented in his own rights. While he is kind, he is mainly into seeing how things can play out for him. He’s a generous person, eager to help others, but he does so to see where it benefits him. Being his father’s son, he knows very well how to use his power and influence to get what he wants. Being a rich teen, he comes off as very spoiled and entitled. Which he really is, he thinks because he holds a higher status than most in the world he is better than others. He’s also rather introverted, which is a common misunderstanding to most. Forcing himself to stay out and play the role of the doting son, can drain him.

Vanity is a downfall for the child of fame, and it’s a rather true statement. The male puts a lot into his looks, and would rather die than mess it up. Allowing people to assume he's just a pretty boy, when he's really more dangerous than that. August often comes off as "bitchy" to other people, due to his very abrasive and blunt personality. He likes to bully and demean people, because it gives him power over them. Knowing that he has an influence, however negative on them, makes him thrive. However, as most, he usually does this to cover up his own insecurities within his life, point in case his father.

Being the child of a crime boss who’s well known among the criminal underworld, isn't as glamorous as people believe. Yes his father is rich due to this, as well as his own job. But Augustus must be very careful, in terms of his surroundings. Because, anyone could be out for him. Being his father’s heir, his name is very well known among the criminal underworld by association, and by his ruthless tactics and habits of dating enemy family’s sons to get them under his father’s thumb. He finds what his father does incredibly dirty and will quite often abuse his father’s credit cards to do a minor form of damage to the male. However, he knows when the time comes he will take over the family business with great reluctance.

To know the hero, you must first know his creation.

Octavian Salvatore was actually born Adonis D'Amore. The youngest son of one of most notorious crime families in Boston, Massachusetts. He was one of the most coveted members due to his father, Raphael, had chosen Octavian to be his heir. Choosing him over his brothers and sisters, because he believed Octavian showed a promise. However, Octavian (much like Augustus) at a young age decided to refuse his destiny of taking over the family, and wanted to become an actor. The theatre called to Octavian, as he thought it felt right for him. So he legally changed his name, forged his own documents, to pursue acting. Only eighteen at the time, he started out on small bits until he found work as Augustus Caesar on an upcoming television series, and being one of the main characters it paid well. This attracted the goddess, Aphrodite to Octavian. Her knowing his birth name was the exact same as one of her famous lovers, she indulged herself and brought herself to the man.

She posed as a woman named Aphrodite Areia, claiming to be named after the goddess for her likeness. The two hit it off fairly well, but she spoke about having to leave soon, and Octavian didn't see her for three more years. By then, he had become a worldwide name, and had started his own talent agency helping others like him. By the time Aphrodite made herself known back to him, he had lived a successful life so far and that only turned her on more. '

So the two slept together. And within the months before Augustus was born, Octavian's father had found him and approached him letting him know, it was either watch his career burst down in flames, or take over as the Don of the D'Amore family. Weeks later, Octavian gave into his father's wishes, had decided to run the family. Little did he know his family started on it's own journey, when his assistant, Sabine, brought him a rose covered basket with a sleeping baby wrapped in a pink blanket. A small golden pendant in the basket as well. Originally believing this to be a joke, he noticed a small letter that read:

Octavian had no idea what to think. He suddenly had a child to care for? The male considered giving the child up for adoption, but know he could do it. So with the added pressure of being the newly coronated king of the D'Amore family business, and with being a full time actor. Octavian Salvatore was now a father.

Raising Augustus was not easy for Octavian. He was normally busy, with flights across the country to film. He was always in interviews, or in scandals. His hired staff did most of the raising for Augustus, and he got everything that he wanted. They overcompensated for his father's inactivity in his life, and he didn't mind it, he enjoyed it. It irritated him his father was never home, but what was he expected to do? Continuously trying to date, with August disapproving of each woman. From a young age, August was analytical to the point he could tell when someone was going to use his father for more than just love.

Eventually, a woman named Alessandra won over August's heart and her and his father soon got married after only three months of dating. August was in love with Alessandra, in terms of idolization. She helped him grow into the person he is today, and was the first to accept him when he came out as homosexual. The woman was like his mother, and because his own had never been around, he considered her his mother. He was ten when his first monster attack had happened. He and Alessandra were on a shopping trip in San Diego, while Octavian attended to the crime business refusing to show August or Alessandra. They were met by what August proclaimed to be a singularly eyed man, who tried to kill them. Luckily, they got away. Octavian fearing it may have been a member of another crime family, soon introduced his family to the darker side of his world.

Octavian taught his son the basics of the trade from his eleventh birthday on. Him and Alessandra were taught basic martial arts, how to shoot firearms, and essentially how to protect themselves. August never left his house without assigned bodyguards accompanying him, which led to very rebellious behavior. August despised this side of his father's life, but also relished in it. He had a whole legacy that would one day be his and he learned to deal with it. He began to sneak out, and see friends. Go to parties, definitely directed to people older than him. But they didn't care he was only sixteen, he was a celebrity he had more connections than any of them dreamed. At this point, Augustus' abilities began to manifest themselves and suddenly he found people doing things for him if he coerced them to do such enough. So he began thinking big, and began to convince his bodyguards to disappear for hours at a time, so he could go have fun.

Once Octavian caught wind of this behavior, he forced Augustus to attend a prestigious boarding school in New York, that was for...troubled celebrity kids. August protested, even tried to convice his father, but the pendant August arrived with and Octavian wore protected him from most forms of charmspeak leaving it useless against him. Octavian sent him to the school, despite his son's protests and continued on. August wasn't alone, he eventually found friends in one of the "lower" level students before ascending to the top with him. A young boy, who had some sort of disability with his legs, named Mason. August showed only his kindness to Mason, and destroyed verbally anyone who came towards them or talked about Mason.

From sixteen to eighteen, August was the king of the school, and surpassed all his classmates in his classes. Eventually someone challenged August for his throne. A new girl named Jessica. She made it her life goal to attempt and destroy August's repuatation at the school failing with every single shot she gave. Until eventually the school went to a museum, and Jessica found a way to corner August and Mason in the courtyard of the museum, away from everyone else. She lunged towards August, revealed she was not in fact a snipy teenager, but an empousa who had been sent to sniff out demigods before they were taken to Camp Half-Blood. August was able to fend her off, but fainted at the sight of his friend Mason, shedding his human legs being replaced with that of goat legs, and take off his bracelet forming a sword and turning the cheerleader to a pile of golden dust.

Mason carried the unconsious male to a nearby car, and hotwired it before taking them to Camp Half-Blood, narrowly avoiding anyone they could, before ultimately reaching the borders before being attacked by a few more empousai who had followed them to the camp, and Mason ended up slaying them with help from demigods who heard the commotion. August attempted to help but was thrown into a tree, where he fell unconsious for the second time in the day.

August woke up in the infirmary behind Camp Half-Blood lines, confused and Mason explained everything to him.ey do not age, remaining eternally young. 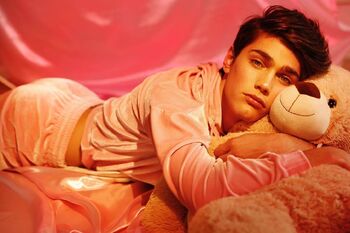 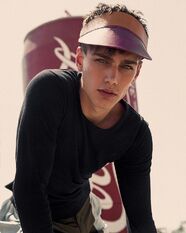 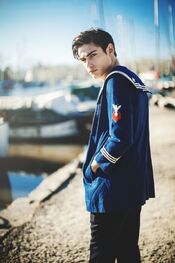 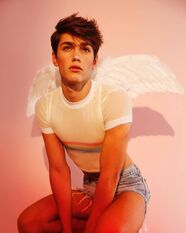 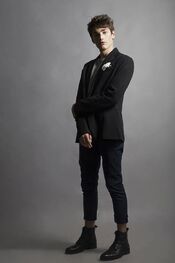 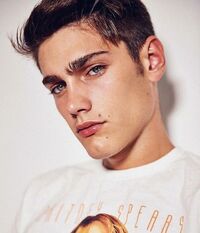 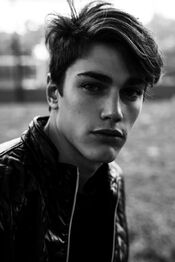 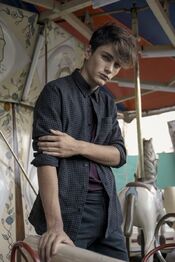 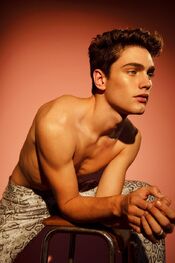 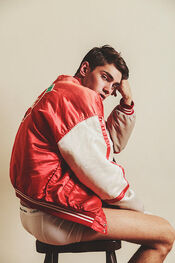 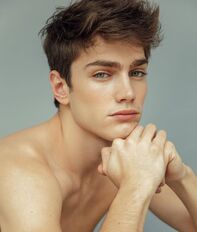 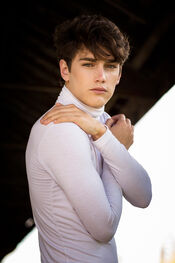 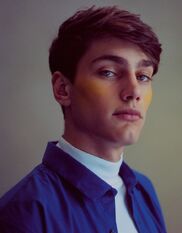 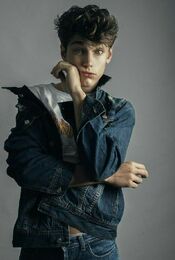 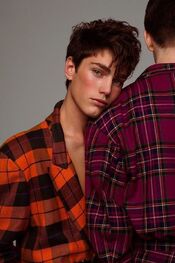 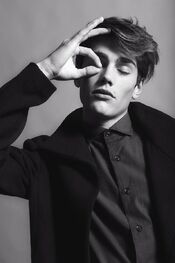 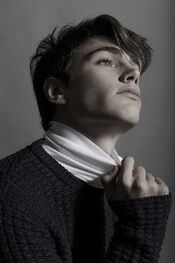 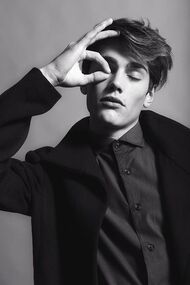 Retrieved from "https://camphalfbloodroleplay.fandom.com/wiki/Augustus_Salvatore?oldid=1801325"
Community content is available under CC-BY-SA unless otherwise noted.