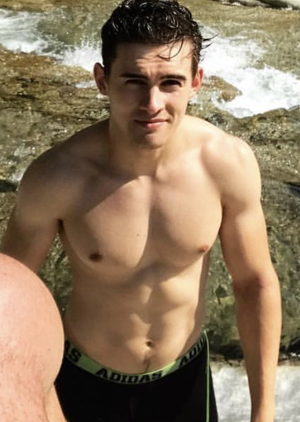 Beau is very outspoken and loud. He generally is a handful to be around and normally needs to be watched as he will get into trouble most of the time. Although goofy and usually hyper, he is loyal and will always offer advice whenever needed, it just isn't good advice. He can be rather corky, doing things you wouldn't normally think a 16 year old would do, such as play with Lego or even watch childish tv shows.

When he gets serious, he tends to lose his "childish" personality and becomes very focused and depending on the situation can even become aggressive and mean. But he'll most likely snap back to how he'd normally act.

Laurent Chambre, a rich man living in France, met Cybele while he was coming home from a late night drink at a local bar. Cybele feeling sorry for Laurent as he was slightly drunk, volunteered to take him to his house. While getting lost for awhile, they soon found Laurent's mansion, and soon after ended up drinking even more. Later that night they ended up in bed together, and in the morning when Laurent walk up, Cybele was gone, leaving a note informing him of her true identity. Not believing what he just read, Laurent went back to his normal life.

Nine months passed and Laurent was driving home from his job, when he soon met a young woman named Katherine Morté. The two began to talk and soon after Laurent drove Katherine to his house, shocked to see, there was a baby on his doorstep. The two took the baby inside, and Katherine soon found a note wrapped under the blanket. The note said that the baby boy belonged to Laurent, and that he would soon know what to do. Laurent named the child Beau, and three months later, was engaged to Katherine. Although Katherine wasn't Beau's real mother, he thought that she was, often spending more time with her, instead of Laurent. This drove a wedge between the family, and when Beau was a year old, Laurent and Katherine got a divorce. Laurent not wanting anything to do with Beau, gave full custody to Katherine, and soon Laurent left, where he than got re-married to Beau's step-brother's mom Fleur.

Beau and Katherine soon moved to England, as Katherine did not want to see Laurent ever again. At the age of five, they returned to France as Katherine accept a job offer at a huge company. She began to get a load of money from her job, and soon Beau and Katherine moved into their own mansion. But when a gang of teens burnt the mansion down, Katherine was inside searching for Beau's blanket, as they were going camping, Beau soon watched from Katherine's car, as his house and his step-mother got engulfed in the flames.

Beau soon went into a foster home, where he sat waiting to be adopted for five years, at the age of ten. Someone should interest in adopting him. Until a younger child came into the foster home, and the couple decided to adopt the young child instead. Leaving Beau at the foster home. Soon he began to loose hope, and decided to run away. He only got three blocks away, when the police found him and took him back to the foster home.

Another year had passed, and soon Beau had been getting plenty of adoption requests, Beau soon went to the first couple who offered to adopt him. A young couple named Chris and Amore. Beau grew up with the family, but never felt apart of it. At the age of thirteen Beau was walking home from school when he had gotten attacked by three nearby Lamiai, struggling to survive them, a satyr soon appeared and killed one of them by chopping of its head with a celestial bronze sword. The other two continued to attack Beau who was on the verge of death. Soon his adoptive father Chris was walking down to a nearby café when he saw Beau being attacked by the Lamiai, as he could see through the mist. He soon ran over to them and tackled the two Lamiai off Beau, and the satyr soon sliced off their heads.

The three soon returned to Chris and Amore's house, where Beau overhead Chris talking to the satyr about something called Camp Half-Blood, he said that Beau was not ready to leave and that the satyr should return in two more years, hesitantly the satyr left. Soon Beau reached the age of fifteen, and the satyr returned, Chris and Amore said their goodbyes to Beau, and Beau and the satyr soon boarded a plane to New York, where the satyr explained about the Greek gods, and that Beau himself was a demigod. When a flock of Stymphalian Birds started trying to break the roof of the plane. The satyr soon gave Beau a map to Camp Half-Blood, and went to the roof to battle the Stymphalian Birds, soon all the birds fell off the plane, along with the satyr. When Beau arrived in New York shocked, he began searching for Camp Half-Blood. He got to the forest where a nearby erotiad bumped into Beau, she than told him straight away that he needed to follow her and they soon arrived at the gates of camp, where Beau was claimed by Cybele.

Powers of a Child of Cybele:

Retrieved from "https://camphalfbloodroleplay.fandom.com/wiki/Beau_Crest?oldid=1795457"
Community content is available under CC-BY-SA unless otherwise noted.