☃Βορεας☃
❅❊❅❊❅❊❅❊❅❊❅❊❅❊❅❊❅
Boreas won the God/Goddess of the Month Poll competition for January 2013. 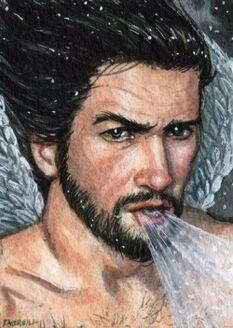 BOREAS was the purple-winged god of the north wind, one of the four directional Anemoi (wind-gods).

In Greek mythology, Boreas is the personification of the North Wind and Winter. Boreas was born, along with his brothers to Astraeus, God of god of dusk, stars, planets, and the art of astrology and Eos, Goddess of the Dawn.

Boreas had the Aurora borealis, otherwise known as the Northern Lights of Canada, was named for him, and his mother Eos' Roman form, Aurora, since he is the god of the North Wind. He also had the Hyperborean cyclopes and Hyperborean giants are both named after him, as they both come from or live in the north. He is also one of the only Gods that is known not to normally speak English instead speaking French.

In Roman mythology Aquilon is the god of Winter and the North Wind and is described as having less sympathy for heroes on quests than Boreas.

In Greek vase painting Boreas was depicted as a striding, winged god. Sometimes his hair and beard were spiked with ice. In mosaic art he often appears as a gust blowing head with bloated cheeks up among the clouds. This imagery carried over into post-Classical art, and is frequently found in old maps.

Boreas was known for his abduction of Orithyia, the daughter of King Erechtheus of Athens. Boreas wooed Orithyia but she declined many times. Boreas eventually decided to take her by force, covering her in a cloud, spiriting her away, and transforming her into his immortal wife. She would bear him an immortal daughter, Khione, and two mortal sons, Calais and Zethes. With his brother; Zephyr, Boreas dwelt in the mountains of Thrace. Boreas' winds can be powerful and violent, causing great destruction.

Boreas and his brother winds were often imagined as horse-shaped gods. An old Greek folk belief was that the winds Boreas and Zephyros would sweep down upon the mares in early spring and fertilize them in the shape of wind-formed stallions. The horses born from these couplings were the swiftest and finest of their kind. The fabulous horses of King Laomedon of Troy were said to have been sired in this way by Boreas upon the Trojan mares.

✶More Information✶
✶Personality✶
Boreas lives a life of relative isolation, sharing a winter palace at Quebec with his two immortal sons; Calais and Zethus, and his daughter Khione. (Snow) This leads to Boreas coming off as icy and ruthless when aggravated. He particularly enjoys freezing those who cross him and keeping them as frozen statues. Throughout mythology, Boreas is shown to be covetous and perhaps lecherous in spirit. This is shown by his abduction of Orithyia who refused his marriage proposals, and also his proclaimed affection for “daughters of Aphrodite” in the Lost Hero. However Boreas can also be a just and fair god, demonstrated by his decision to hear Leo, Piper and Jason out and letting them leave his frozen palace, though it is debatable whether he allowed this for his own amusement.
✶Appearance & Image Gallery✶

He is described as being a sturdily built man. He wears a suit that appears to be made of snow, and has a pair of dark purple wings. Additionally, he is said to have long hair and a beard, both of which are covered in ice.

Retrieved from "https://camphalfbloodroleplay.fandom.com/wiki/Boreas?oldid=1570088"
Community content is available under CC-BY-SA unless otherwise noted.