A Spear and Shield

Brutus is a very smart man although he doesn't think things through all the way, especially when pressured. He enjoys fighitng and often wrestles his brother for fun. He is very hard headed and often charges into situations before thinking them through. He will kill you unless asked otherwise by someone he loves or trusts.

Lapida was a common whore to be used as the nobles wanted. She was used in parties for entertainment and the only reason she did this was to pay for her home. She was a very poor peasent who turned to this business for the money. She continued this for years until one day she met the man of her dreams known as Albus. He was immediately drawn to her and her to him. He told her about his adventures as a Legute and as a soldier. She was very impressed and invited him to her room as she felt he deserved a reward for all his troubles that came from war. They spent the night in each other's company and the next day Albus was gone. Lapida didn't think twice as it was rather normal for her visitors to be gone, not wanting to be seen with a common women in bed with you. She soon figured out after a while that she was pregnant. After nine months she gave birth to two healthy young babies and named them Brutus and Julius. A few minutes, after giving birth she got news that her father was coming home soon and she knew he would be angry to find out that she got pregnant. She ran to the Mediterrain Sea where she put them into two baskets and let them drift off. She laid the baskets near an area where the current swept into two rivers that were very small and led into a local area close to Rome.

Lapida's father hadn't been in Rome for a few years as he was a sailor and was due to come back in the next week. Knowing this Lapida took her babies to the nearest rivers to send them away. Her father never wanted her to have children and being a relentless man she knew he'd kill them.  Brutus was seen going down the river by a Senator's servant. She quickly got the crying infant and ran to his house. She showed him and his wife the baby and they were struck with sadness. They decided to take in the child as one of their own. They had one other child and she was only 3. That night the father named, Atilius had a dream. A cloaked soldier told him of Brutus and of his mother. That morning the father awoke, yet he just shrugged off the dream as what it was, a dream. Brutus lived a rather good life, he went to school and had good grades, he was abnormally large and strong for his age and would beat down most bullies who tried to challenge him. He soon grew to 11 and that was when he was attacked by a Harpy. A satyr that had been a kid Brutus saved from a bully jumped in and killed the Harpy with a hidden sword he had. He tried to explain everything to Brutus but all Brutus did was deny it all and run away. Brutus didn't believe the Satyr boy as he didn't trust anyone besides his family. He lived his life normally as the Satyr would still protect him from the occasional monster. Soon Brutus completed his education and decided to join the Roman Empire's army. He fought in many battles and eventually was raised to the rank of a Legute.

When Brutus was in his thirties he decided to become a gladiator to start his retirement fund and he was very good, becoming a champ in only a few weeks and beating some of the best gldiators. One day, Brutus was informed that Titus was coming back from his victory in Jerusalem with a leader of the army and Brutus hoped that he got the pleasure of killing him.

The Next day, Brutus found out that he did get the pleasure of killing him and when he had him pinned he couldn't do it because he felt a connection to this person and after he had saved him Brutus found out that they were brothers and in his last fight Julius comes to watch and Brutus dies in the match by his enemy but comes back to life as a Discord Nymph and Julius and Brutus have a vision from Eris on what had happened to them both and when the visions stops the people assume they are drunk and Brutus finishes off his enemy.

As the years went on Julius and Brutus lived in the Roman Empire and lived like the fisherman did, they fished for their food and money and thanked the gods for what they had and when Brutus wanted to fight in the wars that went by Julius did not stop him and Julius became very wise and humble and when the Roman Empire fell the two moved to the dominating capital which was England and lived there basically the same way. But, when they came to America the satyrs told them about Camp Half Blood, they had never considered Camp Half Blood before since they thought it was just a place to waste time for demigods but when they got to America they figured why wouldn’t they and the satyr took them to Camp Half Blood and the two watched it grow and Julius loved it there talking to all the wise people there and he especially liked the centaurs because they were full of wisdom. Brutus liked the Camp as well but he preferred to be out in the American Wars (fighting in every war America has had.)

(How they were turned into Spirits)

Julius died in the Siege of Jerusalem when the Romans burned down the Temple, Julius died in the fire and Eris turns him into a Discord Nymph and Julius kills a few Roman Soldiers and then is captured by them and taken to Rome where his punishment is to be killed by a gladiator and that is Brutus, but Brutus does not kill him because he feels a connection to him and when Brutus tries to find out what this connection is Brutus' satyr comes and tells them that they are brothers. Brutus dies in a fight for another gladiator and he is distracted and is killed by the other gladiator and Eris then turns him into a Discord Nymph too and while the crowd and the other gladiator are trying to figure out how he came back to life Brutus and Julius are given a vision of how they actually came back to life and when the vision is over the crowd and the other gladiator have decided that they were very drunk and Brutus kills the gladiator and Brutus and Julius live out the rest of their life as fishermen and relying on the gods for help and Brutus would fight in the wars that passed by while Julius stayed home and when the dominant place was America they moved there and a satyr took them to Camp Half Blood and Julius loved it there but Brutus much rather perferred the wars of the US instead of Camp 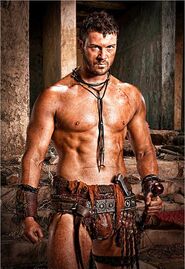 Retrieved from "https://camphalfbloodroleplay.fandom.com/wiki/Brutus?oldid=1633570"
Community content is available under CC-BY-SA unless otherwise noted.