Pen that turns into a Celestial Bronze Sword

She isn't the outgoing type. She prefers to stay at a place wherever she considers home. At first she was a loner but then when her nanny came along, she found a friend and a bright side of her had shown. She is loyal to her loved ones even though they have already seemed to turn theirs back on her except for the case of her father. She isn't blind to not see that someone doesn't like her. If she feels someone dislikes her then she just lets it be but of course she feels rather sad about it especially when it's her loved ones who hates her.

William Lassiter was a successful lawyer. He never lost a case. He was a man everyone would consider very busy and love was never in his mind. However, one day when he went to a coffee shop to, of course, buy some coffee before going to work, Hecate was also there and the first time she saw him, she was already attracted to William. She tried to follow him and get his attention but nothing would work. He was just too workaholic to notice women but Hecate really wanted him and so she just made a love potion which would surely work.

She used her magic to fool the employees and the employer of the coffee shop, where William always went, and make them think she was also an employee. And so that morning, she was the one who served William's coffee. Little did he know that Hecate had already put the potion in it. Once he already had a sip of it, he instantly felt deeply and madly in love with Hecate. Her plan worked so well that she was able to bring him home and then it happened.

The next morning, William just woke up lying on his bed oblivious of what had happened last night. He never drunk alcohol or anything but he just assumed that he was really tired from work and that he just went straight to bed.

A few months later, when he got home from work, he just heard a baby crying. The odd thing was he heard it coming from his house. When he finally came inside, he saw a baby in a basket and a note was pinned to the baby's cloth. It was from Hecate. She told what really happened and that the baby was his. Upon knowing all those things, he was enraged. He never planned to have a baby. He was too busy for such a thing. But then he still had a heart and so he decided to just keep the baby and he named her Caroline Danielle.

Caroline grew up without having much attention from her father. She'd always stay up late at night just so she could see her dad but in the end, her father would just scold her for not sleeping early. Sometimes she'd request for them to go to the park but William didn't have the time. She was home-schooled and wasn't really outgoing so she didn't talk to anyone other than her dolls and the television.

One day when William already had enough, he asked her what she really wanted. He thought maybe a nanny would do but then Caroline just said that all she wanted was her 'dad'. William didn't feel even a very slight sympathy for his child. He just did what he thought would be best. He got her a nanny.

Thankfully, Caroline and her nanny got along. Her favorite thing to do was play chess and other games of logic. Her nanny would just play with her and let her enjoy. Caroline loved to read, unlike most demigods, she wasn't diagnosed with dyslexia. However, she was diagnosed of ADHD at the age of seven. Greek myth interested her especially. She had once imagined how would it be like to be a demigod. She thought it might be great having all those powers and stuff. But she knew such thing would be impossible. Not quite.

When she was thirteen years old, she and her nanny went to the park like what she always wanted. Her nanny went away for a moment to buy some snacks then a hellhound came into sight. Caroline could not believe her eyes. She could not believe what she actually read in the books were true. She recognized it was a hellhound but she was no hero to take them out. She only had one plan in mind--run. Thinking it was just a big dog, she picked up a stick along the way and threw it but the hellhound did not seem to be in the mood to play fetch. It was more like in the mood for lunch. After a few minutes of running, Caroline was already growing tired then a truck suddenly bumped into the hellhound with so much impact that it almost flew away. Caroline stopped running and stared at the truck in awe. She heard someone shout in victory. The guy in the truck immediately got off and another shocking thing for Caroline--it was a satyr, another 'mythical creature'. The hellhound was not dead just yet. It just got up and it seemed to be angrier than ever. Then the satyr handed her a Celestial Bronze sword. She had no idea how to use one but her battle instincts acted up. The satyr just distracted the hellhound with the sound of his reed pipes while Caroline ran behind it and slashed and stabbed it hard. It disintegrated. After the battle, the satyr explained everything to her including how he got the truck since she wondered how on earth he got it. He said it was just parked somewhere and the driver left the keys on it.

Caroline and the satyr told everything to her nanny and, well, she believed it. When they got home, they waited for her father and also told him. When the satyr finally explained about camp, William did not agree to it. He just said that if monsters would be out there to kill her then let it be. Actually, he did not believe all of the things they said. But just in case, the satyr stayed with her, not really stay at home though, more like just there to protect her. Then a few months later, weeks before her fourteenth birthday, she was attacked by harpies. Good thing the satyr was there and she still had her sword with her. It would have been a better thing if she knew how to use her powers but by that time, she still was not claimed. The thing they could only do was fight them with their weapons. The satyr used his reed pipes to grow vines and grass and whatever else grew and they wrapped around the harpies. While they were trapped, Caroline attacked them slashing her sword and stabbing them until they all disintegrated.

After that second attack, they tried to tell William again but he never listened. The satyr told her to just go with him even without her father's permission but she refused. She chose to stay with her father. The satyr understood and so he just had to stay with her. When she was fourteen, she was attacked by Stymphalian Birds. The satyr made some noise like really annoying ones to distract them and when they already were, Caroline attacked just like what she always did and they disintegrated. She got a bit of training from the satyr. When she was finally fifteen, she was again attacked by a fire breathing horse and they did their usual tactics--distract and attack. They successfully defeated it since it wasn't as hard to kill one just like her previous attacks. But she'd had enough. She couldn't take it any longer so she just ran away with the satyr. They rode a cab going to Long Island and there it was... Camp Half-Blood. She had finally arrived and was claimed by her mother, Hecate. 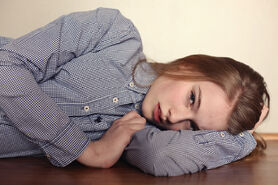 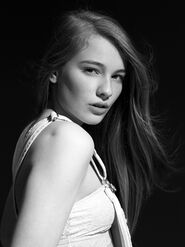 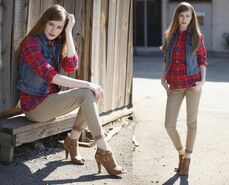 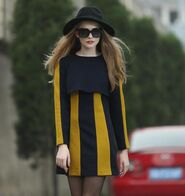 Note: 3/6/9 month powers are not yet unlocked

Retrieved from "https://camphalfbloodroleplay.fandom.com/wiki/Caroline_Lassiter?oldid=1505481"
Community content is available under CC-BY-SA unless otherwise noted.