Chandler Hendrix @moonheir Follows you Son of Pandia • Camper
I’m a nightmare dressed as a daydream.

Chandler is very regal. He carries himself with dignity and respect, for others around him, but more for himself. Without even speaking he communicates his demeanor and authority, as European royalty, which he actually is, as the heir of the thrown in his home country.

During the siege, his father, King Serebryanyy, had sent Chandler away, into a hidden hanger, where a plane was waiting. There Chandler met a woman who he had never met before, but he had been told by his father that she was safe. She was wearing overly sized "Jackie'o's". The woman started the airplane, and Chandler boarded with his luggage, fearing that He would never look back upon his home.

The woman began the flight. It wasn't a large plane, it was quite small, although it was comfortable and a nice living space. They were headed for America because they knew there, they could take asylum from their enemies. They left the King, who ended up perishing, and the Palace was taken over by the attackers. The woman managed to get out of the airspace around the castle quickly.

MaximMitrofanLondonSpear(-) Suddenly, she turned around and stared at Chandler. She through a small token out in front of her, and it vanished, then a portal like oval shape appeared and it looked as if it was floating in air. Another woman stood with her back to Chandler, through the iris picture. She turned and stared right at Chandler as if searching for his soul. Finally, she spoke.

"You don't know me, and you won't ever again. You are special Chandler, ever since you were born, you were special. I knew that and your father knew that. The truth is, your a demigod." She woman was cut off by Chandler.

"What! What the hell are you talking about?!" Chandler was freaking out.

The woman continued, "For too long, I have waited, your father never knew, so you never would have been told. No one in your life even knows your kind exist, they are all blind to it. You could even use your own powers, and they mostly wouldn't see. I came here, which I don't typically do, I am your mother. Pandia: Goddess of the Full Moon."The woman raised her hands, and suddenly her appearance completely changed, her hair was tied up in a Grecian style, and a Greek, black, silk column dress hung from her body. "I am taking you to where you will be safe, those attackers were not any ordinary enemies of your kingdom. They were monsters, they will try to hunt you down and kill you, and feast on your blood." Suddenly the image vanished, the woman was gone, all that was left from before was the female pilot who stood behind where the image had been. She picked up a black leather box, and approached Chandler.

"I am an Aura , Celestial Nymph of the Breeze. What your mother has said is true." She handed the box to Chandler. "These will help you on your journey."

Chandler was freaking out, but something about the woman, an aura that came off of her, made Chandler believe what she said. Granted, he was still pretty freaked out. He took the box and opened it, inside were two bronze bracelets. He took them out and placed them on his wrists. "They will help you in your time of need." The woman said.

He had never seen a picture of his mother, he just knew she wasn't in her life. She showed a small display of her powers for him to see, which confirmed everything for Chandler. I mean, he really had nothing left to live for, his home was most likely destroyed, and his father dead (which he already was, like he died a while ago like right after Chandler left, just saying. Although Chandler was only guessing).

Eventually, the plane landed in New York, Pandia had told Chandler where he was to go (Camp Half-Blood). After the Chandler exited the aircraft, he turned back around, but the Aura was gone.

Chandler had cash, so he went and tried to get a taxi, he only knew how because he had seen it in movies before. He got the cab...eventually and then started to relax, which was a bad idea. Almost immediately as he leaned back the cabbie slammed on the breaks, sending Chandler flying up and hitting his face on the front passenger seat of the car. The cabbie slipped its head around and its demonic eyes stared at Chandler. He screamed and fiddled with the door handle to try and open the door. The Empousa lunged at Chandler, as he screamed. He ripped the headrest off of the back of his seat and used the pronged edge to try and knock the monster away. MaximMitrofanLondonSpear(2) He succeeded, but only by disorienting if for half a second. He slammed the same side of the headrest into the window, shattering the glass, as it fell out into the street. Chandler jumped out of the car and ran. People glanced at him, with distaste, but Chandler kept running. He finally looked back and saw the monster slowly closing in on him. Its demonic eyes flashed at himself. Chandler ran and kept running. Eventually, he turned into a jewelry store, and watched for the monster, as he hid among the merchandise. As he suspected the monster entered the shop and began making its way towards him with hate and malice creeping over its face, in its expression. Chandler wondered "How is no one else seeing this!" He grabbed hold of a metal display pole and tried to impale the creature, but it was ready this time. The Empousa grabbed the pole and yanked it away from the boy.

Chandler slipped but slid under the creature punching up as it passed in between its legs. He ran across the store, hoping over display cases and flipping over tables, breaking hundreds of dollars worth of jewels in the process. He spun around so that they faced off against each other in one aisle. Chandler rushed at the creature, as he did, two bronze swords appeared from his bracelets, they were equally balanced. Chandler was slightly caught off guard, but hey enough crazy things had already happened today, why would he not take a pair of matching swords?! Now, this was a fair fight, the empousa may have been fast and known how to fight, but Chandler wasn't about to give up. With one sword held upright in his fist and the other in a downward/ backward position, he ran at the snarling creature. Slashing the swords around, he finally impaled the creature around its shoulder, slicing off the arm.

It snarled and started to attack again, but suddenly it flickered, instead of the monstrous fiend, which had been in front of him, a beautiful woman stood in its place. She had large red lips and a slim yet defined face. She opened her mouth to smile at him, but that is when Chandler noticed the sharp, abnormal teeth, he zoned back into what was going on, out of the woman/monsters enchanting face. It lunged again and turned back into the monster. MaximLondonSpear

Getting out of the creatures glamour had been easy for Chandler, he was more interested in the boys, then the girls. Finally, with all his strength almost exhausted, he stabbed at the creature again, this time fully shoving the sword through its body. Almost immediately, it crumbled into dust.

Finally, after a long walk, and without another attack, Chandler made it to Camp Half-Blood.

Powers of a Child of Pandia: 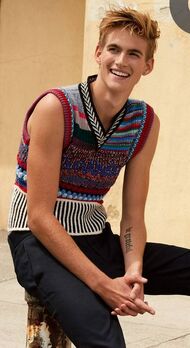 Retrieved from "https://camphalfbloodroleplay.fandom.com/wiki/Chandler_Hendrix?oldid=1803105"
Community content is available under CC-BY-SA unless otherwise noted.