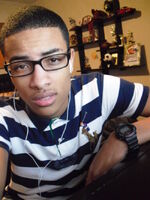 Personality: Andre is a very calm and collective person, not wanting to get into stupid situations. He's somewhat cocky, due to his intelligence and telepathy. He can slightly flirty, he still has his alcoholic tendencies. Finding comfort in the feeling of inebriation.

Desire gave birth to Andre and tried to raise him the best she could in the tough streets of New York, we went to school where he got super high grades without ever really trying. He had met a young boy named Kenny and they were fast friends growing up. Until Andre was 12, when he was thought to be a genius due to his intelligence as a Koios kid surfacing. So was send away to an elegant private school on a scholarship.

Andre was put on much pressure at the school, from his mom and his teachers to do his best. Eventually the poor son of north became overwhelmed by stress with school and everything and turned to alcohol, much like many teenagers suffering from stress. When he was 14, he was attacked by two telekhines. Managing to outrun them since he did track and telekhines made horrible runners due to their webbed feet.

He just thought they were weirdos who were dressing up like fish, Andre had been lucky to go without another monster attack until he was 15. He was attacked by a pack of hellhounds, a satyr in disguise saved him. Using his hooves to make powerful kicks at the beasts, they weren't slain just distracted by pain all enough for the two explained. After the satyr and explained Jay the whole demigod concept, Andre burst out laughing. Figuring it was a huge prank from some rich punks, he insulted the satyr and walked off. The satyr was mad, but decided to continue his job and try his best to protect Andre from afar.

9 months later when he was 16, he was attacked by a fire breathing horse.Andre was almost trampled and the Satyr was roasted to death, but an Eris kid from Camp easily slayed the beast. The experience made Jay quite believing to the world of the Greeks. The Eris boy was named Micheal, he explained the concept of Camp and the gods. Andre didn't mention it, but he honestly didn't like the idea the gods were running things as Micheal told him about quests, how gods can't see their kids and monsters.

Once Micheal brought Andre to camp, strange enough he wasn' t claimed by any gods. So he was put in the Hermes Cabin, Jay went right to work trying to figure out who his father was. His intelligence, telepathy and power over cosmic energy confirmed he wasn't a child of any of the cabin gods.

But after Andre spent a few weeks at Camp, an Athena kid named Matthew figured out Andre was a child of Koios. Due to his powers mentioned earlier, along with the fact he always knew where North was and how he could differ Polaris from other stars. Something he did when the Astraeus and Athena kids were doing some Astronomy work. Once word spread around Camp, Andre was hated by many of the campers. For being a child of one of the titans who served Kronos during the 2nd Titan War.

Life became harder for Andre, hardly being accepted by the campers. His only friend being Micheal, the stress turned him back to drinking. He also thought about more about the gods, he didn't think it was right that the gods could go around banging all the mortals they could. Knowing they can't see the children of these affairs, he didn't hate the gods he just didn't like the way they ran things.

Later on, he went a quest run by Micheal. The son of Eris had to find a child of Koios who stole Eris' Apple, eventually the 3 other questors turned on Jay, suspecting him of stealing the apple. But since his precog sense warned him, he managed to escape his attackers. Later on, he was found by a BC member who took him to the Sanctuary. He was 17 at the time.

Reason for joining: Andre feels like the gods have been unfair, taking all the power for themselves. Which isn't right, especially in our modern society. The Greek world needs democracy, votes, elections and office terms.

It has been past that date, do you want an extension? There is a crime, but no criminal. ★❣Broken❣★

uhm kinda what i meant, but okay V.V

Bach says to pick a different faction because she doesn't feel like dealing with it >.< ~

Retrieved from "https://camphalfbloodroleplay.fandom.com/wiki/Claiming:Broken_Covenant/Andre_Knight-_Accepted?oldid=1231446"
Community content is available under CC-BY-SA unless otherwise noted.