Personality: Annaleise is a normal girl once you first see her. She can be sweet at times but, other times, she can be as sassy as Eris. However, something that makes her stand out, is her fascination of Blood. She is so fixated with it, that, she is said to have a fetish for Blood. She enjoys things being fair, and just, and hates it when they're not. She prefers others not to know of her Blood Fixation as well, fearing that they will find her weird, and seclude her. 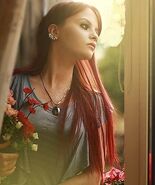 History: Hank Denim was a Demigod, son of Eros. He was sailing into the Sea of Monsters, in search of adventure. He managed to bypass Scylla and Charybdis but, not without difficulties. His boat had been wrecked, and he had managed to escape on a lifeboat. His right, and dominant, arm had a very deep cut in it and, there wasn't much he could do without it. After a few hours of floating, a hole in the life boat, most likely made by the two hags, became evident, as the life boat began sinking. He began to panic but, there was not much he could do without his dominant arm, so, as the lifeboat sank beneath the water's depths, he allowed the waves to take over him, welcoming the oncoming death.

Hank, however, ended up being washed a shore on a remote island. Circe's island. He was welcomed by Circe's servants, and, was taken to Circe. Before she could turn Hank into a guinea pig, he managed to seduce her into sleeping with him. Afterwards, Circe realized what she had done, she became enraged, and turned Hank into what he truly was, a snake. She threw him into the ocean afterwards, hoping he would drown. After that, she didn't really remind herself of her time with Hank, but, 9 months later, Annaleise was born.

Circe kept Annaleise on her island for the first few years. Annaleise was taught by her mother's servants, as her mother was always too busy. She learned a few spells, and a bit of sorcery. However, after a while, she began to become tired of just her mother's servants as play mates, so, she asked her mother if she could go to the mainland for her 7th birthday. Her mother dropped her off at a hospital without a second though, glad that the hassle of raising a child was no longer in her hands.

Annaleise was then put into foster care. She was, at first, put into a home with many other foster children. She was the runt of the litter, being only one of two girls, and, the other being 15. She looked up to the other girl, loving how in charge and such she was. However, the boys were less than kindly to her. They would constantly push her around, and, would often just leave after she started to cry. Many times, after they had ran away, she had sat, being all cried out, and, look at the new scrape that she had gotten. She would look around, making sure no one was watching, and, gently start licking the cut, loving the taste of her own blood. Her foster parents, at the time, just saw the kids as a way to make money without really trying. When she turned 10, a social worker finally saw the bruising, the scrapes, and the scars and asked about it. When it was revealed that the other Foster Kids had done this to her, and, the parents did nothing to prevent this and, took not only her but, her Foster Siblings away. She was soon put into a new Foster Family, well, really, a Foster Mother, as the agely woman was widowed a while ago.

She loved her Foster Mother, who had cared for Annaleise as if she were her own. She made few friends, and, the ones she did make, she ended up scaring away when she used the spells she knew. She soon became aware that the mortals did not know that the Greek Myths were reality. She started to pray to her mother for a few friends that would understand her. Her prayers were never answered, so, she assumed it was unimportant to her mother. Annaleise was slightly angry at her for this but, accepted the fact that her mother would've been busier with something else. Her foster mother, being the nice and timid lady she was, taught her some things that she didn't learn in the school that her Foster Mother had enrolled her in, like Gymnastics, and baking.

One day, when she was 12, she found her Foster Mother murdered in their home. She realized it had been a robbery gone wrong, as much money and jewelry was missing. She began to weep on the floor, silently beside her Foster Mother, when, she noticed the blood puddle that surrounded her mother. She remembered licking up her own blood when she was younger, and, wanted to try it. She promised that this would be a one time thing, and, that, her Foster Mother always told her to try new things. She swiped some up with her finger, and, tasted it. She was shocked. It tasted even better than her own blood, which, tasted far better than anything she had tasted previous. She couldn't stop herself. She licked up all of her Foster Mother's blood from the floor. Afterwards, she was so disgusted with herself, she forced herself to throw up, and then, ran away.

After a few hours of running, she began to weep, and prayed to her mother for a second, and last, chance. She prayed that none of what just happened did. That, their house hadn't been robbed and that whoever it was didn't kill her Foster Mother. Or, at the very least, had made sure her mother wasn't home. She prayed and prayed hard that she hadn't licked up all of her Foster Mother's blood, or, just to make everything feel okay. Once again, her mother ignored her, and, ignited a spark in her. She became very angry with the Gods and Goddesses. She heard stories of her mother down-talking the other Gods, and, she couldn't believe her mother was just like them. She began to run again, away from her home town. She soon came upon a hellhound. She managed to defeat it with the spells her mother's servants had taught her.

She continued to run for three more years. She came upon many more monsters, defeating them with her magic, and, sometimes just running away from the monster. However, one day, she ran into a BC member. She told him her story, and, he referred her to the BC. Even though she took a bit of convincing, she joined the BC, she joined the Veritum. It was there that she got her sickles, and her back up dagger.

Annaleise's first of her dual sickles

Annaleise's second of the dual sickles.

Annaleise's back up Dagger
Add a photo to this gallery

Reason: "We Demigods, we fight, and, we either win or lose. If we win, we are congratulated, usually nothing more, and, if we lose, we die. It's a poor prize for winning, and a huge risk for losing. But, this is not our fault. It is our good for nothing parents faults! They use as as tools, as if we are their play things, and, then they give us nothing. It's not fair. It's not fair that every one is at war right now, either! It's their faults! The Gods! We can take care of ourselves. We've shown that much. I, for one, was dumped on the streets the very first chance she got. Whenever I prayed to her for help or guidance, she did nothing! My mother always down talked the Olympians, the Titans and just about every immortal being there was, and, then, she goes and turns her back on me, and, acts just like them! There needs not to be rulers of us, for we can take care of ourselves, as can the mortals. Maybe if the Gods weren't in power, there would be peace in the world. No one deserves to rule over the other. It's just not fair."

Retrieved from "https://camphalfbloodroleplay.fandom.com/wiki/Claiming:Broken_Covenant/Annaleise_Denim_-_Accepted?oldid=1243593"
Community content is available under CC-BY-SA unless otherwise noted.