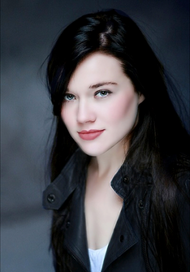 Personality: Avery can be quite friendly, once you get to know her. If you don't, then, she can be the most stubborn person ever. And, by any chance, if you somehow say that the gods are great and ever amazing, watch your back. She hates demigods full of themselves and the gods. But behind all that, is a girl waiting, for someone to truly love her.

History:  Samantha Jacobson was an investigator for the NYPD when she met him. Samantha was at a crime scene inspecting the place when he came right up to her. "Hello there, pretty lady. The name's Tom."  Samantha, taken by his words, introduced herself to him. She gave him her number and said to call her that evening. When she came to her apartment that evening, she found him outside it, waiting for her. She opened the door for him, and offered him some wine. They drank. Drunk, they made it to the bedroom. The next morning, Tom was gone. But he left a note saying: "I'm Thanatos, god of Olympus." Samantha, confused, went to work the next morning. Nine months later, she had a baby, Avery. Feeling she needed help, she made herself a profile on a dating site and got married a year later. The new guy was alright.

Avery grew up miserably. Her mother and her husband always argued, every single night. When she was three, her mother lost her job, and they moved to a poor apartment. The husband, Peter, drank every night. When Avery was five, her mother died of a brain tumor. Avery left alone with her mother's husband, was scared. She was his servant. He beat her sometimes. Having had enough of it, she refused to do his work at the age of 10. He pulled out a knife. Avery went by instinct, and since he was drunk, she had an advantage. She took the knife and stabbed him. He collapsed onto the floor, dead.

Avery packed her things. But while she was packing, she found a letter in her mother's things. From her mother. Knowing she was going to die, Avery's mother wrote this to her. It said:

I'm sorry to leave you with Peter. It's your true father's fault, you know. If he hadn't left me, we wouldn't be stuck witth him. His name is Thanatos, and he is a god of Olympus. Do your best to do what's right. I love you.

With lots of love,

Avery left and ran away, when she was fourteen. On the way she met a pair of demigods, like herself. A daughter of Zeus named Lucy, and a son of Hades named Kevin. She asked where they were headed, and they said the Broken Covenant. She joined them. They told her all about it and how getting revenge on the gods was the best answer. Lucy and Kevin learned about the BC from their parents, who were former members of the BC. One day while they were traveling, they came upon a group of empousai. They battled it. Having come across a couple of demigods on a quest, Kevin received a Celestial Bronze dagger, but not being trained, it was hard. In the end, the empousai was destroyed, but Kevin disappeared and Lucy died. Since she was a daughter of Zeus, Avery thought it was going to rain in saddness of her death. Instead it was still bright and sunny.

Avery despised the gods totally now. She sought out the Broken Covenant with the directions from her friends. And she went and talked to their leader. Now's she's sixteen years old, and waiting for the moment to take out her anger.

Reason: The gods just leave their children to die. They shouldn't! Children should be loved and remembered after they die. But the gods just ignore. She says get the mortals. Get a strategy. Then the gods shall no longer rule.

Please sign your claim with 4~s How old was she when she got her first attack? Was it with the drakon? Can you please change the drakon into an easier monster? I don't think it will come after only three demigods. Plus, its an extremely hard to defeat monster.

A manticore is also a hard monster ^^" Forum:The_Monster_Encyclopedia<-- can you please choose something not rare and is in easy or medium difficulty there?

Well, I don't think I demi-god could die from an easy monster, but I guess its the most probable one that she would be able to kill. What did they use to kill the empousa? It is supposed to be CB, so where could they have stumbled up on a weapon? Did they kill it? Please elaborate

How did Lucy and Kevin know/find out about the Broken Covenant? Did the three encounter any other monsters apart from the empousai?

Everything seems good, except one detail. My bad, can you please write a group of empousais instead? As I re-read your history, I realized that Kevin and Lucy must be average fighters to survive in the streets and seek for the Broken Covenant. For them to come as far as where Avery was at, it should be more difficult.

ONE more problem before it becomes claimed for the BC. The model, which is Phoebe Tonkin, is being used by User:NickiWilliams for her character, Elinor Blackwater. You may either ask the user to share the model, or change it to a new one. Heinrich's approval will be on hold until the issue is fixed.

I'll pass this along to Minx and soa (faction leader and Lt) now that you've fixed the image issue, they'll look it over and approve for Ortu.

Retrieved from "https://camphalfbloodroleplay.fandom.com/wiki/Claiming:Broken_Covenant/Avery_Jacobson_-_Accepted?oldid=1237462"
Community content is available under CC-BY-SA unless otherwise noted.