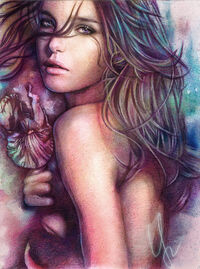 Personality: Caja is for the most part reserved. She's sort of quiet if you don't know her, or don't know her too well. Most of the time another person will have to intiuate the conversation. But after enough time, she will open up and her personality will make a 360. She's opptimistic and upbeat, a kind to joke around quite a lot and want to go places and see things. Basically, just looking at her, Hypnos' kids loose their minds. She might even be seen as a bit promiscuous if she isn't in a committed relationship.

Even if you know her or not, you can tell she doesn't care what people think of her and she can handle criticism quite well.

History: Caja's father was adopted from a more Eastern part of Russia as a young child. He was found starving in an abandoned house by locals. He was taken and quickly adopted by a Danish family that was located in Skagen, Denmark.

When he was twenty-five, he went back to the house in Russia where his parents abandoned him about twenty-one years before. Daniil couldn't stand to stay near it for long, so he went to another nearby town and stopped in at a local pub to grab a drink or two. That is where he met Limos, and spent a night with her.

Nine months later, Caja was born. She was dropped off at her father's doorstep in Skagen, nearly starved to death.

Rewind for a moment nine months to a day after Limos. He met a woman there who he fell in love with and took home. He was about to marry her when Caja showed up. Lucky for him, the girl was understanding and raised Caja as her own. She even gave her the name 'Caja.'

Akilina (her step mother) and Daniil got married a month after Caja's birth and two years after their marriage had a daughter of their own: Diana.

As the two sisters grew, they began to notice that Diana always seemed more hungry or malnourished while around Caja. No doctor could explain it. This ended with Diana growing up to be rather...big.

Caja was fourteen when she was first attacked by a monster. Luckily for her, her neighbour was a thirty-seven year old son of Zeus, and he protected her from it. Admittedly, she had a crush on him. But he was married and she was fourteen, so as you can imagine nothing ever happened. He escorted her to camp that summer.

When Caja was seventeen, she met a man whom she thought she loved. They got along perfectly for a short amount of time in. He was a son of Hecate who had a very bad temper--which she didn't realize at first. So five months in she attempted to break up with him. This angered him so much that he cursed her temporarily with insanity. But he didn't understand how crazy Caja could really get. She ended up killing him and cutting up his remains, and eating them. When she came to her senses a few hours later, she was horrified. She ran from camp in fear that she would be killed or imprisoned for what she did.

For four years she lived on her own, roaming around the country. During the second year, she was sexually assaulted by a demigod claiming to be a God. Because of this event, she has a deep seated hatred for them.

When she got word of the Broken Covenant, and of one of the faction's ideals, she knew that she had found a new place to settle--and with good reason.

You see--even after the spell wore off, a bit of insanity remained in Caja. Over the time she was gone, she became obsessed with power. Even a little bit of it. She would do anything to have a taste of it.

Reason: She believes in Ortu Justitiae's cause, she believes that it's time for the new era to arise, for the demigods to take control, and that the Gods should be working nothing more than a gas station cash register. Caja also thinks that they are the reason she was raped, and knows that they would never treat their kids the way the Gods treat them.

Retrieved from "https://camphalfbloodroleplay.fandom.com/wiki/Claiming:Broken_Covenant/Caja_Eichel_-_Accepted?oldid=1237464"
Community content is available under CC-BY-SA unless otherwise noted.