Personality: Cameron is a ticking time bomb waiting to go off. Her personality tends to clash with others and she doesn't think about what she is about to say before she says it. She will never back down from a fight no matter the size.

Appearance: Cami has dark black hair and electric blue eyes. She has a very modern style and always has trendy clothes on. 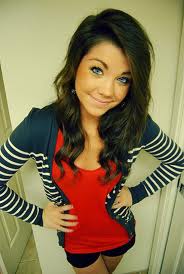 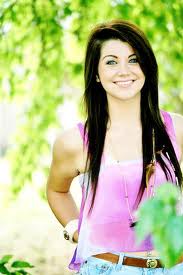 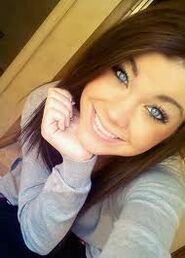 History: Travis Hartly, was once an arrogant jerk to everyone. That is, until his two children were born. He was working late one night at his factory job, when a massive blizzard had appeared out of no where. Frightfully, he jumped in his vehicle and drove away. Half way to his house, the windshield whippers had frozen and would not move, making it impossible to see. Travis went spiraling out of control and went flying into the ditch. He was knocked out, and when he woke up, he had been in his cabin near the mountains of Vancouver.

Taking care of him was a beautiful woman, she had lovely icey blonde hair and pearcing blue eyes. Travis fell in love at first sight, as the two had been snowed in, they had to stay in Travis' cabin all winter. When the snow had ebgan to melt the woman left. Nine months later she returned with two children, handing them over to Travis, she quickly explained everything and ran off. Unsure what to do, Travis named the children Cameron and Jackson.

The twins grew up not always seeing eye to eye. But they would always end up sticking together in the end. One late night when the two 10 year olds were coming home from a birthday party. A goat like creature had ran acrossed the road, unaware of what they had just seen. They continued to walk around the block to their house. When they reached their front yard two hellhounds had jumped from the bushes. Frightened and shocked Jackson began to hyper ventilate. Leaving Cameron or as she preferred Cami, all alone to defend her brother, one of the hellhounds pounced on Cameron knocking her unconscious. She could slightly hear noises such as screaming and growling. When she had woken up, she was still outside, her brother Jackson had woken up, and the hellhounds were know where to be seen. But something new had caught her eye. A half goat half human species. The creature introduced himself as Timothy the satyr. He took the twins and brought them to a hotel. There Jackson began to hyper ventilate again, being away from home. He had dropped his inhailure and nothing could help him. His lungs had began to collapse and he had died within a minute. Horrified Cami ran out of the hotel and into the mountains.

She had only being up in the mountains for 2 days before Timothy had found her. He was furious and told her never to do that again, angry she stood up and pushed Timothy down the mountain, sending him flying down, breaking his neck and dying instantly. Guilty of what she had done Cameron went down the mountain and flew to her grandmothers house in London, hoping to start over. But her problems followed her, as when she turned 17 a second attack had accured. This time instead of two hellhounds, it was a cyclops. Her grandmother being ready for this moment, as she also was a daughter of Prometheus, handed Cami her old celestial bronze dagger to help her fight the monster. Untrained, and unready to fight, Cami charged the monster and she was swiftly knocked off balance, sent flying into a wall. Her grandmother had killed the cyclops well Cami was knocked out and quickly woke Cami up with some ambrousia. She then agreed that she would train Cami until she thought she was ready. Not wanting her to go to camp, as she also had the same beliefs as Cameron, she herself agreed to take Cameron to the Broken Covenant at the age of 20. After 4 years of gruesome training, Cami was ready and her grandmother drove off to the lair of the Broken Covenant. When they arrived, a blizzard had just finished and their vehicle hit a small patch of ice, sending them spiraling into a tree. Cami being more agile and newly trained, leaped from the vehicle before the impact, but her grandmother had went flying with the vehicle. In anger Cami grabbed her grandmothers lighter from her purse that had flown from the vehicle, and set the car ablaze, furious she walked inside and demanded to see someone she could talk to.

Reason: Cami believes that the gods have been in power for to long, and because of this, are blind to what their children must go through and that they don't even care what happens in their lives. They don't care if you die, because in another month the god parent will just have sex with another mortal. She feels like it has been a long time coming and that they should no longer be in power. The only reason she would want to be a goddess, is so she can have a sense of power. She thinks that the gods don't know just how much they hurt mortals, so when and if she becomes a goddess, she would never do such a thing, to show the gods how they should have acted, when they were in power.

What makes her want to be a goddess though? Ortu isn't just overthrowing the gods, they are taking their places, so what makes her think she'll do better?

Retrieved from "https://camphalfbloodroleplay.fandom.com/wiki/Claiming:Broken_Covenant/Cameron_Hartly_-_Accepted?oldid=1792601"
Community content is available under CC-BY-SA unless otherwise noted.