Cato: In battle, Cato is relentless, brutal, cruel and merciless. He will do whatever means necessary to kill anyone that stands in his way. However, his fierce determination comes with an opposite: his recklessness. He looks down on those who are inferior and unworthy to him. He can be very self-opinionated and consequently bombastic and overbearing. Those who fail to recognize his expectations may find themselves the victims of his wrath. He also has the tendency to curse, swear and use vulgar language.

Despite his demeanor, she shows extreme loyalty to his sister, Cassandra. Even though he is younger than her, he shows protectiveness of her. To other people, he is cold but to his sister, he shows a warmer and more brotherly side.

Cassandra: Cassandra is loving and caring to Cato, but only for Cato. She used to care for her father to, but now that he's dead, she doesn't care for him anymore. She loves reading and writing for it is the only thing that relaxes her truly. She is quite a critique and rude..... and a little bit sarcastic. She doesn't like stupid people so they better stay away from her. She tends to be alone but sometimes, she just can't have her brother wandering around and killing people. She also loves to draw and paint stuff on a sketchbook she calls "Malikhain" which is the Filipino word for "creative". 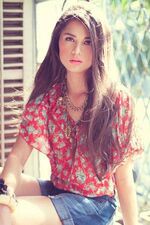 (Both characters apply for one history.)

Charlie Sylvester is a poor man living by himself in Arvada, Colorado. He works as a janitor in a diner to acquire all of his necessities to live a normal and simple life. However, his salary wasn't enough to cope up with his needs. His rent in living in a small, shabby wooden house was on debt too. He tried to apply for higher position jobs, but he cannot as he is only a senior high school graduate. He was on the verge of giving up completely when there came Mnemosyne, titaness of memory, disguised as a rich woman. He met her on the way home when she was asking for directions. After a few weeks, they started to know each other and eventually fell in love. This love led to an affair when Charlie invited her for a simple dinner at his home which he spent months saving for. After a few days, they found out Mnemosyne was pregnant. They seemed pretty much happy about having a child but their problem was money. But since Mnemosyne was "rich", she told him that she will handle the expenses and improve their life, much to Charlie's extreme happiness. Using her power of language, she created new things for them. During her pregnancy, they slowly raised up for the better. When Mnemosyne gave birth to a girl, which was named Cassandra, they were already living great. But it wasn't for long when Mnemosyne left the two of them without a trace. Of course, Charlie felt very sad of losing his lover, but since he had an upper hand on his life now, he moved on quickly.

After 2 years, he was now working on a better job and able to completely provide his family with his needs. One day, he met another goddess, which was Nike, goddess of victory. Nike disguised herself as a gambler and made a move on him. When they got to know each other, Nike invited him to go gamble at the casino. Since Nike can predict gambles, they won much of the time. After a while, Charlie was now a complete gambler. His money started to go low. That time, the very same thing happened with the two of them: they fell in love, had an affair and all that. They had a child, which was named Cato. Consequently, Nike left them like what Mnemosyne did. He was left to take care of two children, but his personality drastically changed.

Years passed and the two half-siblings grew up, with completely different personalities. Cassandra grew up smart and had a fond of writing while Cato grew up to be a bully to others and rebellious person. Despite their father's gambling problems, they still managed to attend school. Cassandra worked hard while Cato loitered around and caused trouble to others with his gang. Charlie didn't cared much of their children and let them do whatever they want with their life. This made Cato resentful of him. Cassandra always stood up for his younger brother whenever Charlie and Cato fight. While Cassandra was at home writing, Cato was out on the streets. He became a juvenile criminal, from simple shoplifting to physical abuse. He was clearly a pain in the neck in their place.

One day, Charlie was on his way home from the casino when gangsters rounded him up and snatched his things. But they weren't contented, they stabbed him to death and thrown his body on the end of a dark alleyway. Upon knowing this, Cato, even if he hates his father, decided to avenge his death. Using the info he got from his friends, who knew the gangster society at town, he went to where the gangsters hang out and found three large dogs sitting at the corner. However, the instant he approached them, the three turned into hellhounds and tried to pounce on him. Actually, the gangsters who killed Charlie ran away when they realized the police found out what they did. Fortunately, he was able to run away quickly because of his innate reflexes and speed as a child of Nike, despite not knowing this. He thought he just got it from experience. He dashed to his home and found Cassandra locking up all the windows and doors. She said she was also chased by the hellhounds, which she described as horrible-looking black dogs. Cato asked what happened to their father's body. She said his corpse was at the morgue already, being examined by the forensics team and told her to wait for three days until the body arrives. Cato urged Cassandra for them to run away to escape the strange attacks. Cassandra reasoned what will happen to their father's body. Cato explained that Charlie is gone and the two of them are the only family left. Cassandra thought of it again and said yes.

Quickly getting everything they can find with necessity, they packed all of these in backpacks and left the house. They hid several times when they heard barking sounds and ran several times too. They didn't know it, but they already left Arvada after running for a while. It was practically hard for them, going somewhere they didn't even plan. They have to compress their supplies for them to survive. They found themselves fugitives, hoping for a new place to live in. After a week of suffering in the open, they entered a thick forest in search of food, water and a place to sleep peacefully in. Unbeknownst to them, the forest they ventured into is part of the Broken Covenant's territory. They went in further and unfortunately, a giant scorpion appeared in front of them, ready to sting them with its poisonous tail. In the nick of time, Total Cebotari, a member of the BC and child of Ate appeared and killed the giant scorpion with ease. He asked the two of them who they are, where they came from and what are they doing in the forest. They explained everything that happened ever since the hellhound attack. Seeing that they knew hellhounds, he deducted at once that they are demigods and offered them to join the BC and fight against the gods in exchange for their needs. They were confused at once but eventually understood everything as Total explained these to them on the way to the Sanctuary.

After finding out who their god parent is, they vowed to train and fight against the gods in name of the Broken Covenant.

Cato: An Executioner's Sword, a hatchet, and a Swiss dagger.

At first, all we wanted was a new home. But upon finding out ours and the other BC members' true nature as demigods, the principles they hold and the same nature of the gods, we vowed to fight against the gods. Even if we know them by a very bit, we found out what they are really doing. We chose this faction because we, like the others, want three things: freedom, justice and to eliminate those senile gods. We have been suffering for too long. Its time to put an end to the source of hardships and be the righteous rulers of this world.

Why would hellhounds kill there father? How did he find the 'gangsters'? Did they know they were demigods?The true genius shudders at incompleteness and usually prefers silence to saying something which is not everything it should be. 01:28, October 8, 2012 (UTC)

I changed it. The gangsters who killed their father ran away when they found out the police found out what they did. So, the ones Cato saw were hellhounds, covered by the Mist as gangsters. And no, they don't know.

the mist doesn't cover hellhounds to look like people, in the books they always just appeared as fairly large dogs

OK as far as the reason for the faction, keep in mind, Ortu doesn't "just" want to be free, they want to be the gods, like actually replace them, Veritum is the only faction that just wants freedom

Retrieved from "https://camphalfbloodroleplay.fandom.com/wiki/Claiming:Broken_Covenant/Cato_and_Cassandra_Sylvester_-_Approved?oldid=1792357"
Community content is available under CC-BY-SA unless otherwise noted.