Personality: •He's too immersed in organising and law to pay attention to the world around him. He isn't laidback at all and is extremely opinionated--so much to the point where he becomes judgemental. Failure isn't an option for him. 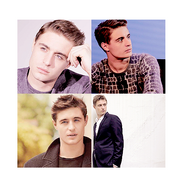 • Conner Grimaldi was born to Diana Grimaldi and Koios in 1999. Born out of wedlock, Diana was a criminal justice lawyer and Koios in the case of how Conner was known as "Rhys Watson", at least on Earth. The man was her client and he was on trial for murdering someone. They had sexual tension as things advanced but Diana refused to do anything with him. It had to be professional. On the day he got acquitted however, she threw that all out the window when they went out to celebrate. After a few glasses of wine and champagne, they had sex in the bathroom of a bar. They never saw each other again afterwards considering the embarrassment of doing it in a public bathroom.

Once Diana had found out that she pregnant though, she informed him immediately. Despite doing this, she refused his money and his help. Diana was a #IndependentWoman and considering her background of going from rags to riches without help, she wouldn't start taking it now. After years of trying to privately talk to her about the child, he had soon given up but he remembered to tell her that the child would be a demigod and he'd have to go to camp. Diana had taken it as a joke or a lame excuse for him to take the child so she tried to forget about his words and yet somewhere in his heart, she believed him.

The boy grew up wanting to go to law school and getting into politics. He loved American politics especially from learning about FDR to Nixon. He was intelligent in all his subjects but stayed to himself mostly. He was a bit mature for his age so he refused to hang out with all the other children claiming they "didn't get it like he did". By the age of thirteen, he had his first monster attack. It was a harpy. He had a very minimal chance of surviving if he tried to fight it so he ran and hid until he got him and was sure it was safe. Assuming he had hallucinated, he hadn't worried about it until his second monster attack at the age of fifteen when a hellhound had attacked him. The only reason he hadn't died was because a satyr had fought it. The satyr had brought the boy to a hospital by saying he was a "friend of the boy". The minute Conner had woken up, he had claimed that he hadn't known what happened because he forgot about it all. His mother remembered everything Koios had originally said to her and worried that what was said was true. Remembering the notes he had given her, she had decided to see if everything was real. She had told him everything and he considered it with an open mind, something he never really did. Agreeing that this may be true, she drove him to camp and then he was claimed immediately by Koios. Once he come, he had come across the Sanctuary and met those from the BC. As a result, he had decided to apply for Civitas which then got him accepted.

One year became two years and that's when he realised it was probably not best for him to go back home. While he had missed his mother and they spent lovely Christmas' together, the risk of a monster attack grew higher and higher and he wasn't trained for the real world. It seemed idiotic to return home when he'd just always have that risk of dying like that.

The gods care for no one but themselves. If we let Olympus stay as a dictatorship, we'll forever be at their foot, never on the same level as them. Zeus cares more for the pleasure of life rather than ruling accordingly (nor does he do this without extreme bias). Demigods are being sent on slaughter missions and for what? A sense of pride? No. Nothing. There isn't even any acknowledgement and I simply cannot stand by here and take it anymore. A democracy is what we need, a fair say in what goes on in this world. We need justice, it's the only hope for the future of this world.

Retrieved from "https://camphalfbloodroleplay.fandom.com/wiki/Claiming:Broken_Covenant/Conner_Grimaldi_-_ACCEPTED?oldid=1722029"
Community content is available under CC-BY-SA unless otherwise noted.