Personality: Connor is calm, logical, and has superior intelligence. He also can come across as rather detached.He prefers to sleep late, often due to business and school-work keeping him up until the early hours; and he suffers from low blood pressure, which makes rising difficult. He is very polite to people who are in power or related to it, and claims he only helps people who can benefit him somehow.

Apollo met Cynthia in a music competition one day, though Cynthia was part of the crowd they got into a conversation and soon Apollo invited her on a date and they began dating and soon Cynthia found out she was pregnant with Connor and soon after she found out, Apollo had left them leaving no note, just like her previous lover, who was Ares in disguise and had a son with him too, who she named Harry.

Connor always got the top marks in school whilst Harry was always at the bottom. Like Connor had always planned, he knew Harry was smart but Connor didn't want him as a rival so when it was time to hand in assignments, Connor switched harry's assignments with ones Connor had purposely failed so Harry never got good marks, Harry never knew Connor was doing this as he never looked over the homework and when he did, he always just shrugged it off.

The two children were both diagnosed as ADHD but only Harry was diagnosed with being dyslexic, when Connor was five, Cynthia married a man named Sammy who was a lawyer and they moved into a mansion and Connor and Harry got everything they wanted, but each night, Sammy snuck into Connor's room and watched him sleep until one night he came out as a paedophile and had only married Cynthia to get to Connor.

This continued to happen until he was ten and when burglars broke into the house for the valuables and when Connor had gotten in their way they tried to kill him but Sammy, who always kept a gun with them if this event happened or something similar, shot the burglars without hesitation.

After the event Cynthia loved Sammy more and began to see him as the real father of the children and soon went on business trips for her work leaving Sammy with the two children, but Harry always went to sleepovers at someone else's house leaving Connor alone with Sammy. In this time Sammy's paedophilia nature multiplied and became more often until Cynthia or Harry returned home and Sammy went back to the usual time. After the burglary Connor knew telling Cynthia about Sammy was no option as she would never believe him.

When he was twelve Connor was in the park with Harry when a hellhound jumped out from the bushes, tackling Harry to the ground, though Connor would easily let Harry die he decided it would be best to keep him alive, and so he grabbed a rock from the pond and smashed it down onto the helhounds head due to the hellhounds complete attention to Harry. When the hellhound fell off Harry he brought out an army knife, which was celestial bronze, he had stolen the knife from his mother as Ares had left it in the house accidentally and Cynthia kept it as a keepsake of Ares, which later on he told Connor he always kept as he was always being beaten up by the year twelves, but as soon as the hellhound crashed to the ground Harry stabbed the hound multiple times but when he stepped back the hellhound just burst into dust and Connor dragged Harry home, annoyed by the way Harry was acting so violent.

When Connor was fourteen, Harry disappeared, the police thought about a kidnapping but some of Harry's clothes were missing so they suspected running away, Connor never found out which one it was, but he didn't care either way. They began to investigate Cynthia, Sammy and Connor and eventually found out about Sammy being a pedophile, as one night they had left but one had forgotten his keys at the house so he came back and found Sammy and Connor together. When Cynthia heard about this, she was heartbroken and a couple of nights later she hung herself as she had blamed herself for Connor's ordeals.

Sammy was taken to jail and Connor was taken to foster care, this was at the age of fifteen, he made a few friends there and among the friends was a boxer who began to teach Connor how to fight. After a couple of months there a satyr arrived and befriended Derek and after a week or so the satyr told Connor about the Gods, he took this in silence and soon they were in a cab to camp but Connor began to think about the gods, and after a while he began to hate them. If one of them was his real father then why did he not save him from Sammy? From what he got from the satyr, a lot of demigods were killed by monsters yet their parent did nothing to save them. Why were the Gods ruling the world when the world was obviously corrupted in filth.

When they were getting to camp their car ran over some spikes and the car capsized knocking Derek out. When he woke up he was in the middle of a forest about to be killed by BC members but he used the boxing skills he learnt from the foster home he managed to dodge the bc members sword and punch him in the jaw knocking him out as he was taken by surprise. The other member grew angry at this and went fullout on Connor and nearly killed him if another member didn't arrive. Seeing the scenario he asked Connor who he was and Connor grudgingly explained and the new member, obviously the leader of the trio asked him his views on the Gods and Connor answered the question and the two remaining members looked at each other before the leader asked if Connor wished to join the Bc which Connor did. 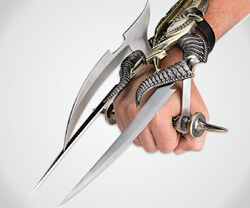 Veritum Unitum -- I asked myself why the Gods are still ruling, they have been for a millenia, was it not time for them to be rebelled against? Were the demigods so stupid to allow themselves to be pawns for the Gods enjoyment, I am not those demigods. I know when I am being used as a pawn, but no, I am my own person, I am the king on my game of chess. Not a pawn. Why is there so much blood shed when the Gods say that they are the better rulers than their parents, and why do they never help their children, even on the brink of death? if the Gods are happy like they are now, then they should die. It is time to end this cycle of war.

Have you fallen In love with the wrong person yet? ~Time~

Won't Harry notice Conner switched the assignments once he got the paper with grades back? Harry, I guess, is Cynthia's son with Ares? If so, please add. Was the knife Celestial Bronze? It should be to disintegrate the hellhound. And if so, where did Harry get it? By the way, thanks for adding this section ^^There is a crime, but no criminal. ★❣Broken❣★

He didn't add it, I added it when I left notes last time, but he was rude and deleted the comments >.>

I only deleted it cause I changed the whole history ^-^ that comment was pointed to the previous history, I just didn't see the point of keeping the comment there when what it was adressing it was completely gone :) I didn't mean to be rude or anything >.<

Have you fallen In love with the wrong person yet? ~Time~

Oh ^^" Well... looking at the claim, everything seems to be good except the part where Harry disappeared. Was he kidnapped?How was Sammy found out?There is a crime, but no criminal. ★❣Broken❣★

I don't see how you can presume in the history that "a lot" of demigods are born into poverty, that's very presumptuous on your part, and considering the much larger amount of normal mortal people born into poverty, I'd say whatever demigods MIGHT be born into severe poverty would be a huge HUGE minority. How did he get to 17 without the option of going to camp sooner? You need to explain why he didn't go to camp after the first attack. Also, the history doesn't really match why he would be convicted to join the BC, I realise the general view amongst quite a few users on the wiki is that the BC is some blood thirsty cult bent on killing, so the whole idea of the interaction between him and the BC member is bs, especially for Veritum, Anton is hardcore with taking down the gods and only wants those dedicated, not those brought into the cause because their life was threatened. Then on top of all that, if his very limited view in the gods, what little he was told by this satyr, is that they are so horrible, what the hell would make him think that this BC group with blood thirsty thugs that will kill if you don't join is any better.

They can't have gone to camp any time in the last two years, it's not allowed.

That doesn't make any sense, so he walked into camp, looked around, decided he didn't like it and left? Because he couldn't have stayed at camp, because he isn't allowed to have been at camp in the last two years, making him a year older only works if he didn't stay at camp, but left immediately.

It still doesn't imply he left immediately, because if he did leave immediately than nothing about camp could add to his feelings towards the gods, because he wasn't really there.

It still makes it sound like he spent time at camp, it isn't allowed to have him at camp in the last two years, so you'd literally have to have him get there, not like it, turn around and leave pretty much immediately.

Even though I can't approve this, I think it's good to go >.<There is a crime, but no criminal. ★❣Broken❣★

OMG I am SO sorry, I just saw that Broken had edited it last and assumed there were problems still >.<

OOC that means either Flame or Ruby will look at this and approve for the faction.

>.<" sorry! I was asked to write that so someone could approve of him ^^"There is a crime, but no criminal. ★❣Broken❣★

Retrieved from "https://camphalfbloodroleplay.fandom.com/wiki/Claiming:Broken_Covenant/Connor_Alexander_-_Accepted?oldid=1781071"
Community content is available under CC-BY-SA unless otherwise noted.