Cynthia Amoré's father, Kristopher Amoré, was the business-savvy project leader of a construction corporation in Patras, Greece. Kristopher engaged Thesis, the protegena of creation, under the alias Elleanore Thene. Kristopher's construction business was sent to build a Greek-styled park in New York, New York in the United States. While there, Elleanore, five months pregnant, displayed a sense of obsession with the place. Kristopher, who loved his fiancé dearly, ultimately quit his job when asked to return to Greece and bought an apartament in Brooklyn.

Two weeks later, while Kristopher was out sarching for a new job, he received an alarming phonecall. Elleanore went into labor, premature by a whole three months. The odds of a baby so undeveloped surviving were very low, but as if through miracle the baby survived. The tiny, underdeveloped girl named Cynthia made a full physical recovery. A few days after the child's birth, Kristopher started to notice an odd phenomenon. He was finding it hard to keep his focus on his fiancé. Therapists deemed it the result of stress. Until one night, his wife seemingly vanished from the house without any clues about her disappearance. The police investigated the case for months, but never got a single lead on the woman's absence.

Years later, when the girl was five, she began complaining about her head hurting. Kristopher believed Cynthia was just experiencing a normal headache, but after continued complaints day after day, he took his daughter to a doctor. The doctor then referred him to a hospital, which diagnosed Cynthia with the beginnings of short-term memory loss. She was bullied throughout school because of her illness. An attack by a hellhound in fifth grade was her first encounter with a monster. The rumors spread like wildfire by mortals, their eyes cloded by the Mist, which led to nothing but more bullying. They say the girl who forgets everything got attacked by a greyhound. It never even got close, because apparently her toy wooden sword turned into a real sword and she sliced it in half. A few months later, a squad of soldiers gunned down a big tenth grader who tried to steal her lunch money.  And on, and on. Before long, Cynthia was called a freak.

That life ended for her when she was fourteen, just exiting her third of the three middle schools she attended. A cyclops street gang attacked her apartment. She could never remember the detalis afterward, just that her father died, and she was running through the streets away from crazy cannibal monsters with one eye each. Then a boy that looked around twelve pulled her into an alleyway. The two escaped into the sewers before stopping to talk. Confused and forgetting how the incident began, she left the boy, whose name she also failed to remember, to talk first. He started telling Cynthia things about gods and something about halfbloods. She became only more confused, so the boy, exasperated, said "Alright, uhm, let me take a guess here. One of your parents abandoned you, right? Yes? which one? Mother, alright well she didn't die or anything, she just didn't raise you. She's a goddess. You'll be able to help her out later becaus eof all that. Athena or aphrodite, maybe... (the boy sniffs her) Hm, you smell like a protegena, maybe Nyx. The point is there's a place for people like you, whose parents are gods and abandoned them. it's my job to bring you to that place. I'm a satyr, look!" At this point, the boy kicked off his shoes to show something peculiar. Cynthia forgot this little detail as well....-Then, out of nowhere, the monsters found them. The boy had attempted to fight off the monsters while protecting her, but was killed. At this point Cynthia decided she would have to flee. The boy had said that she was the daughter of a god. She should have powers... but Cynthia had no idea how to use them. She fled, barely escaping by jumping into a taxi she hadn't paid for. The large men thundering after the car were enough motivation for the driver to floor it.

At this point, Cynthia wandered around, trying to remember where the boy said to go, a place where everyone else's parents were jerks and gods, who abandoned them all too. With all the money she could scavenge from her house, mainly through her dead father's credit card, recently loaded with inheritance from her late grandmother, she tried to travel to the haven the boy mentioned. Ultimately, she headed in the complete wrong direction. Rather than east,toward Long Island, she guessed south. By hitchhiking, mostly, Cynthia wound up traveling through the Appalachians. Her time was rough. Sometimes she would wake up in an alley or cheap hotel with no idea why she was traveling in the first place. It would take days sometimes for her to remember. She fled monsters rather than fought them. She only knew of one of her power of animation, and only through the rumors about herself she was reminded of constantly in her days at school, but just in case the rumor was true, she carried a small wooden sword. It never helped her in any of her encounters.

Her travels eventually came to a close while hiking through the Appalachians at a time she couldn't find a mode of transportation. She had narrowly dodged being nabbed by police and thrown in a foster home, and was rather on edge. She had been crossing by a small stream thinking of how to escape from things next time around, as well as getting pissed when she realized she would forget her plan anyway, when a doorway appeared in the brush next to her. Completely surprised, Cynthia took a few steps back. She was wary about entering, as she had been lured into a trap by monsters before. Her mind was made up when the large, echoing sound of dozens of beating wings like a flock of falcons toward her from behind rang in her ears. She ran away down the stream until she was growing tired, hardly able to keep her senses focused. Suddenly the sound was thundering around her from all sides as a dozen monstrous birds circled her. The monsters, Ares' pets called Stymphalian birds, attacked viciously. She forgot what happened, or what she was doing. Escape hadn't been an option, but... she did something. Cynthia could vaguely remember hearing things streak through the air from behind her just before she lost all energy, toward the monsters but miraculously avoiding hitting her, before blacking out.

Cynthia woke in front of a large, old-looking gateway. Two boys that looked around 16 were arguing in front of her. She struggled to hear their words. The first, who had a bow on his shoulder, was shouting, "You saw her, man! You saw that stupid wooden sword grow. And it turned into mortal steel. Name one cabin god who does that!" The second was regarding the first with a look of annoyance, "What if she's trying to trick us? Seriously, use your brain. She's definitely a demigod. Why would she head down here without the orange shirt?" The first retorted, "BECAUSE SHE'S NOT OUR ENEMY! Look, I don't care. The b**** can hold out against a flock with a mortal weapon. We take her in and we see if Heinrich takes her. Got it?" He offered Cynthia his hand and pushed open the doors. "Welcome to the Broken Covenant."

Personality: Cynthia is creative and smart, but forgetful due to her condition. She often forgets key information, and gets very pissed off when she can't recall something she knew she heard. She has experience living with few resources. She does not hate people or act violent without provocation, but will respond harshly to those who openly support the gods. She does not take insults well. She typically doubts her own abilities because she does not know her powers. She is prone to depression when those she fully trusts act in ways she dislikes, or makes choices she does not agree with. She acts like a control freak when others give her choices. 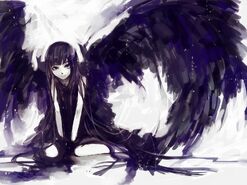 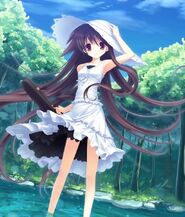 Cynthia despises her mother for not being there to raise her after giving her powers that could have gotten her easily killed, as well as not intervening when her father died. She has decided that no parent should abandon their child to live in constant danger, no matter what "duties" they pretend to have. She developed hatred for Thesis when she realised that her mother expected her to be used almost as a tool to do a god's bidding when the gods show no love to her. She wishes to use whatever powers she has to overthrow such manipulative rulers.

Side note, Cynthia does not know about Camp Half Blood and will believe that the satyr had intended to bring her to the Sanctuary anyway. Nyxil 01:50, June 17, 2013 (UTC)

If she had short term memory loss, how could she have remembered the location given to her? How did she escape the monsters? Why didn't some of them go after her and some towards the boy? How was she able to reach the BC without a problem? I mean, what transportation and money did she use? Also, if she reached the BC, who took/allowed her in?

Fixed all that. I've changed or added everything under the line. I wrote the original stuff late at night and wasn't really thinking too creatively at the time xP --Ask Me Again: Why Am I Here? 21:27, June 18, 2013 (UTC)

How could she have protect herself with a wooden sword? Only Celestial Bronze is an accepted monster-killing metal. As far as I know, a wooden sword wouldn't do her any good at all

Her power of animation, which rarely kicks in, transforms it into a real, albeit currently mortal steel, sword. IE by combining it with her powers, she uses this to defend herself. Like from the Hydra for a very short time, unable to actually kill it, before being saved by the BC. I'm going to have her learn to control the power later, so she can turn it into CB instead of mortal steel.--Ask Me Again: Why Am I Here? 16:05, June 19, 2013 (UTC)

Hydras are extremely difficult monsters to fight, please change it to something more of easy to medium difficulty. Why would she animate and use her powers to change metals? Couldn't she just get a CB weapon, instead of changing it over and over again?

Changed to Stymphalian birds. Because she'd be underestimated and less suspicous carrying a wooden sword around.-Ask Me Again: Why Am I Here? 05:09, June 22, 2013 (UTC)

Retrieved from "https://camphalfbloodroleplay.fandom.com/wiki/Claiming:Broken_Covenant/Cynthia_-_Accepted?oldid=1243570"
Community content is available under CC-BY-SA unless otherwise noted.