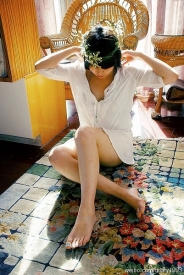 Personality:Erkia is a complicated sort. She's wild and fun all of the time, making everyone smile. However, that only happens when she's alone or with people she knows. Usually, she is very very shy when meeting knew people. And yet, she's also extremely violent towards people who make her angry or just regular people from Camp.

History:Erika was abandoned at birth and was left at an Orphanage in Hong Kong, Japan. The orphanage was very poor but she and her other fellow orphans got by as well as they could. The other orphans, however, were very cruel to Erika. Stealing her food, constantly hitting and tripping her, jumping on her when she was asleep. She hated all of it. At age 4, she was adopted by a couple named Mika and Ryu Shan, who loved her at first sight. She was glad to leave the orphanage, and away from the other kids. When she turned 5, they moved to New York, wanting to see something a little different. Erika didn't complain at all, she was just happy to be away from the orphanage.

When she was 13, she and her new family were attacked by 3 fire breathing horses. They were looking at Erika as they approached them, fire coming from their snouts. Erika was scared, hiding behind her parents. Then, Ryu pulled of his necklace and pressed the center, while Mika tapped her bracelet. Instantly, the necklace turned into a katana, and the bracelet, a spear. The metal on both weapons were a type of bronze that she hadn't seen before. They combated the horses with no problem at all. Every time one was stabbed, the horse bursted into dust. After the battle was over, Ryu and Mika came to confort Erika, who was shaking with fear. When they got home, they explained to her that they were demigods:half god, half human. They were trained at a place called Camp Half-Blood. They believed that because of the horses going after Erika, she was a demigod as well.

They decreed to keep her safe if another monster tried to attack her. When she was 15, Ryu taught her how to defend herself with his katana, in case they weren't around. That was also the day she realized she liked girls more than boys. She talked to her parents about it, and they gladly supported her about it. When she was 16, she finally discovered her powers, leaping a great distance at the park. Ryu confirmed that her god parent was Bia. There hasn't been a monster attacks on her for some time. However, when Erika turned 17, that record was tainted. It was her birthday, after all of her friends and family left, Ryu and Mika gave her there present to her. It was the necklace Ryu wore, the one that turned into a katana. She loved it and thanked her adoptive parents with a hug. Half an hour, after she went to sleep, she woke to the sounds of screaming. She quickly went downstairs to find a giant hell-hound waiting for her, along with the bloody bodies of her adoptive parents lying on the floor.

She quickly pressed her father's necklace, making it transform into the katana. The hell-hound growled, approaching her slowly. Luckily, she practiced with her powers a bit, and threw invisible darts at the eyes of the monster. The hound roared in pain, as he was blinded by the darts. Immediately, she jumped and stabbed it in the head, making it explode into dust. Breathing hard, Erika reverted the katana to its necklace form. She walked over to the bodies of her adoptive parents and broke down in tears. The police arrived to the scene and found her there. They believed she found her parents liked that and ordered in the paramedics. They put Erika back into the orphanage she was adopted from.

The kids who tortured her as a kid were still there, now even more crueler. She was even raped by one of the boys and he swore that if he told anyone, he'd kill her. She stayed their until she turned 18, when she finally snapped from all the cruel torturing. The night of her birthday, got out her dad's necklace and turned it into its katana form. She used it and her powers to kill each and every one of the orphans that hurt her. The boy who raped her, she decided to torture him. She pinned him to a wall, stabbing invisible daggers into his shoulders and thighs. She then dissected him, opening up his whole body like a fish, and left him there on the wall. She loved the way he was screaming at her to stop. She then got her things and ran away, to where, she didn't know.

While hiding into a spot she made up, she was confronted by two people. They said they were from the Broken Covenant, a sanctuary for demigods who hated and have been wronged by the gods. They were there to escort her to the Sanctuary. She was skeptical at first, remembering that her parents said she had to go to Camp Half-Blood, but then, she thought about how her real mother, Bia, could just leave her out in the world and not help her when she her life went sour at times. She then decided to go with the to people to the Broken Covenant, where she felt that's where she wanted to be.

Why Ortu?:Erika was abandoned at birth, given to an orphanage full of kids who treated her like scum. Her mother Bia, or any of the other gods didn't pity or cared for her when she was tortured and raped. They didn't comfort her when she was crying over the bodies of her killed adoptive parents. To her, the gods are horrible creatures who have no hearts. She does not want to be apart of the gods rule or serve them for being careless fools. She wants justice for the gods' cruelty and to be free of the gods. She wants to take over to build a new world. A world where there are no gods to make people do what they wish.

Retrieved from "https://camphalfbloodroleplay.fandom.com/wiki/Claiming:Broken_Covenant/Erika_Shan_-_Accepted?oldid=1581807"
Community content is available under CC-BY-SA unless otherwise noted.