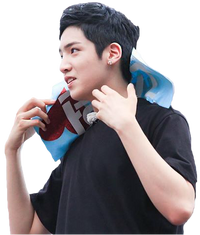 God Parent: Khronos (not to be confused with the Titan Kronos)

Personality: Training at Camp Half-Blood allowed Jae-Hun to imbibe the concept of "kairos", as opposed to exhibiting a more nonchalant attitude back in Taiwan. He describes himself as an opportunistic individual who will not think twice on grabbing the chance when the time is propitious. On top of that, he inherited the trait of valuing time from his father, Khronos. Inasmuch as he despises tardiness and delayed plans, he has the faculty to adjust himself to these and devise a schedule to compensate for lost time. Likewise, he has a flexible mind and spirit. Although firm on his principles, he is not one to narrow his personal outlooks.

However, when he is put under stress, he quickly loses his focus when under such a state. As a result, he resorts to a more reckless fight-or-flight response, where his actions are either black or white. Jae-Hun considers this as a weakness of involuntary control. In order to recompense for this, he has a habit of traveling back in time in order to retrace his steps. In this way, he can see any details he may have overlooked as a result of a lack of focus, then plan his next action.

In contrast to Jae-Hwang, rationality is more dominant than emotions to Jae-Hun. In addition, he has a tougher and more upbeat disposition than the other. Even when they were still very young, Jae-Hun occasionally depends on Jae-Hwang's psychological judgment, especially when he senses that his shrewd arguments become insensitive and critical to other people.

History: Heo Su-Bin, already in his early twenties, decided to leave Camp Half-Blood in search of new paths. He has grown weary of nothing but fighting monsters, going on quests, and basically everything that concerned his demigod life. For a change, he headed for the bright lights of Las Vegas, bringing with him the fortunes he had received from his late parents. He wanted to start out small first: build and invest on a small bar, then add a casino, then a hotel and resort, and finally join the ranks of Sin City's tycoons.

It was sufficed to say that Su-Bin's inexplicable charm and profile earned him the admiration of Khronos and Ananke. However, since the two gods intertwined and formed the fabric of time and fate itself, they must always go together, lest they wanted to bring the universe into utter disorder. By whatever divine intervention, Khronos split Su-Bin's night at his casino into two timelines, starting from when he got drunk by several middle school friends: one involved having sex with Khronos, and the other one with Ananke. By the time these two timelines converged, Su-Bin would be surprised to find "twin" baby boys swaddled in fresh linen at his doorstep.

Su-Bin knew that the gods were behind the sudden appearance of his new children. As if that wasn't enough, his knowledge was justified even more when Khronos appeared to him in several dreams, telling him the truth of what had happened that night at the casino. Su-Bin wanted to escape from being involved with the Greek gods and, by extension, to hide his children from the truth. In a matter of weeks since Khronos' last dream message, he and the twins left America and started a new life in Taiwan. He named his sons with Khronos and Ananke Jae-Hun and Jae-Hwang, respectively.

In less than three years, Su-Bin found himself a fine and young Taiwanese woman, Zeng Yahui. However, several years of marriage turned out to be a disappointment when the couple found out that Yahui was barren. It took her some time to get over her reluctance, but she finally accepted the twins as her own children. On the other hand, Su-Bin put up another casino using the remainder of his investments from the previous one in Las Vegas.

Ever since their birth, Jae-Hun and Jae-Hwang had established an empathetic link between them. Whether this was the reason or whatsoever, the twins showed uncanny synchronicity and calculation in their thoughts, words, and actions. Considering the fact that they look exactly alike, they're essentially the same person, save for several complementing traits. Even Su-Bin and Yahui had a difficult time telling one from the other. I wouldn't bore you on the details regarding their childhood, though. They pretty much had a normal life like the other mortal kids: going to school, playing a lot, etc.

On a certain evening, the twins, now fifteen years old, were to be picked up by Yahui after a tennis game at school. Such was the event, until some of the spectators turned into monsters of varying species: a scythian dracaenae, several harpies, and even a cyclops. In a flash, Yahui ran for the monsters with a dagger at hand and efficiently killed all of them. However, much was her horror when new company arrived at the scene: the Train of Hecate. You see, Yahui swore a personal oath of celibacy while under the service of Hecate as a Lampade. Such was the case until she broke it to be with Su-Bin. She has been hiding from Hecate and her sisters ever since, fearing for her punishment. Luckily, neither Hecate nor the leader of the Lampades was present, so her judgment would be passed later. For the meantime, she was allowed to stay with her family.

Later that night, Su-Bin found out about everything that happened at school: from the monster attacks to Yahui's past. These forced him to tell Jae-Hun and Jae-Hwang about the truth that they were demigods, with one being born from a homosexual one-night stand. Given the circumstances, he had no choice but to send the twins to Camp Half-Blood, where they would be safer and properly trained. Three days after the attack, Su-Bin personally brought his sons to camp. Prior to parting ways, he gave them both Celestial bronze saingeoms, which were his weapons back when he was still at camp. After that, he came back for Yahui to accompany her on the run from the Train of Hecate.

During their first summer at camp, Jae-Hun and Jae-Hwang stayed at Hermes' Cabin because even though they were claimed by their respective godparents, Khronos and Ananke didn't have any cabin. Although they enjoyed much of what camp had to offer, they were too occupied by the status of their parents. Never had they received an Iris message nor a simple letter from them. That was the case until the near-end of summer, when they found out that Su-Bin and Yahui were transformed into rottweilers by Hecate.

Through a priest at the Bethel, Jae-Hun and Jae-Hwang confronted Hecate and her Lampades about their parents and pleaded that they set them free. If it weren't for the twins badmouthing the goddess' nymphs, she would have heeded them. But, alas, their unruly behavior pissed off Hecate. Thus, she only gave them one way to resolve the issue: in exchange for their parents' freedom, the twins must replace them and become part of the Train. Without giving much thought to it, the twins agreed and disappeared into the night, leaving Su-Bin and Yahui back in their human forms. They hadn't seen the two demigods ever since.

For about three years, Jae-Hun and Jae-Hwang, as rottweilers, wandered the night and the Underworld with Hecate. Unfortunately, Jae-Hwang has started to assimilate his canine forms' primal mentality. Night after night, his patience grew shorter because he wanted to be freed from his curse so badly. In a single act of recklessness, he bared his fangs and attempted to attack Hecate herself. Angered by his defiance, the goddess set Jae-Hwang ablaze with one of her torches. Jae-Hun tried to retaliate, but ended up getting burned as well. Deciding that they were of no use anymore, Hecate transformed them back to their human forms and left them in the middle of nowhere to die.

Not minding whether he would be heard or not, Jae-Hun prayed hardly to his godly father, Khronos, so that he would bring his twin brother back to life. Moments later, both Khronos and Ananke appeared before him in their mortal forms, hearing the young demigod's call. After much deliberation on the matter, Khronos, out of pity for his son, reverted time to the point when Jae-Hwang's soul still hadn't passed on. However, because the course of fate was altered, Ananke set her own price: in exchange for Jae-Hwang's resurrection, his soul must be shared with the same body as his brother's. Essentially, Jae-Hun's body would house two consciousnesses. As soon as the two gods disappeared, Jae-Hun collapsed.

After that fateful night, Jae-Hun and Jae-Hwang, now in one body, wandered from town to town for several weeks. On top of accustoming to having two souls fighting over each other, the twins had to battle starvation by scavenging for leftovers. While looking for their dinner on a rainy night in Boise, they came across a certain member of the Broken Covenant, Cecilia Levine. After Jae-Hun told their story, especially about their past with Hecate, the daughter of Phlegethon deemed them worthy of recruitment. Shortly after their meeting, Jae-Hun and Jae-Hwang were brought to The Sanctuary and inducted as new members of the Covenant.

Reason/s for joining the BC/Civitas:

Before anything else, I want to stress out that I do not hate all of the gods. However, I am aware that they, in spite of their immortality and immense power, tend to fall short every now and then. I do not know much about the others but I take Hecate as a prime example. A moment of irascibility clouded her judgment and, thus, we had to pay the price for this. Me and my brother knew better than to disobey a goddess, so we had no choice but to have us leashed and become her servants. Worse came to worst, when my brother cannot bear the life of slavery anymore. I cannot blame him for suddenly attacking Hecate. However, he had no match for her power. As such, it was unfair to retaliate with such a force that killed him, as if his life was measly and easily expendable. This is why I come to the Broken Covenant. Simply put, I want the gods to realize that power and position, although amusing to be used, can corrupt even the likes of them. Nonetheless, I don't wish to eradicate their existence as punishment for their corruption. I've learned from the primordial deities Khronos and Ananke themselves, who embody the fabric of time and fate itself, that without the gods, the universe's very foundations would teeter into chaos.

In all honesty I see no wrong here so yeah

P.S: you need the permission of the wner of civitas and then your done good luck

Retrieved from "https://camphalfbloodroleplay.fandom.com/wiki/Claiming:Broken_Covenant/Heo_Jae-Hun_-_Accepted?oldid=1715267"
Community content is available under CC-BY-SA unless otherwise noted.