3.History: Ileana's mother was a wealthy French noble during the reign of Louis XV. She met Moros at a party at one of her rich friend's home, disguised as a handsome and wealthy Spanish merchant. They befriended there, and soon fell in love and married. However, as much as she loved Moros, she did not want any children, thinking them as bothersome annoyances. Moros, on the other hand, wanted one, and for years pestered her, until finally, at the crowning of Louis XVI, she agreed. A few months later, she gave birth to Ileana. Unfortunantly, by the time Illeana was only a year old, the French Revolution was in full swing. As Illeana's mother was a supporter of the king, her home was attacked by hundreds of peasants. Though Moros was able to protect his daughter, his wife was impaled by a pitchfork thrown through the window before he could save her.

Moros fled to Spain, where he had his home. However; he wasn't a wealthy merchant at all. Moros was actually the leader of an underground group of warriors called Sors Bellatores, Warriors of Fate, a self-proclaimed branch of the Inquisition that, instead of hunting down non-Catholics, hunted down those that they felt should've died, saying that those they attacked defied God by living. In truth they often worked for the rich, acting as assassins and spys. Moros, worried for his daughter's safety, decided it was best if she was placed under the Sors' protection and care.

For 17 years Moros raised his daughter to his ideals of fate and doom, and trained her the ways of combat and her powers. Worried that his daughter might die before reaching her potential, while raising her Moros would regularly travel to Olympus and steal some of Hebe's water, and then give it to Ileana to drink. By the time she was 11, the water truly started having an effect on her, and by 17, the water had a permanent effect on her, so that she would aged ten times slower than a regular human.

Anyways, at 17, Ileana convinced her father to let her go out on her own missions for the Sors Bellatores. Soon, she became one of their most successful agents, again and again completing successful kills and information reports. Only her father had more success than her, and even then only by a small margin. But still, life was good for Ileana, until her final mission. She had been hired by a mysterious contact to assassinate a wealthy merchant in Russia. Though her father (who could see trouble if she went) protested, she decided to go anyway. In Russia, she was captured by her hirer, a son of Boreas by the name of Alex Dairon, though he was better known as the King. Barely only 18 himself, Alex was extremely calculating and smart, who had tricked Ileana to come so he could use her as a member of his own assassin's group, the Ira est Hiemalia, Winter's Wrath. Though Ileana didn't want to, it was either that or death. So she decided to join, thinking she could escape one day.

However; fate had other plans in store. Alex was extremely calculating and smart....and also extremely evil. Though to Ileana and the rest of the Ira, he showed his true self, to anyone else he acted polite and heroic. His plan: to please his father Boreas so much he would make Alex immortal. He did everything in his power to achieve this end, most notably sending Ira members to cause destruction and chaos, and then have himself fix everything and seem like a hero. Finally, his efforts paid off, and Boreas summoned his son to make him an immortal servant godling. Moros, being the god of doom, saw that if Alex succeeded in gaining immortality, he would be the doom of Gaea, and if Gaea perished, they all perished. So, in a dream, he instructed Ileana to stop Alex from achieving immortality in anyway possible.

As Alex was about to take the drink of nectar to become immortal, Ileana burst into the room. Wasting no time, Ileana exposed Alex for who he really was, a calculating, evil demigod. Alex could not deny the accusations, there was so much proof against him. Drinking the nectar to gain his immortality, Alex attacked Ileana.

Fortunantly, Boreas interfered. He fought off Alex, but before he could land the finishing blow, Alex escaped. Worried about what his son would do now, Boreas went to Olympus to warn the other gods about him, and to have him hunted down. Satisfied with her success, she first travelled to Ira est Hiemalia base, and disbanded the organization. Then she returned hom to Spain. Well, she was....

During her travel, while she was staying in France on the way to Spain, Alex attacked Ileana, angry and desperate for revenge. Though she fought back fiercely, Alex eventually over-powered her, and froze her in a pillar of ice, though before he did she cursed him so that he would be doomed to die in flames.

Hiding Ileana in some remote mountains in northern France, Alex then attacked Apollo, thinking that he could negate Ileana's curse. However, as Apollo was going to use the sun, he attacked Alex using it, eventually killing Alex, burning him within fire, just as Ileana had cursed him.

Anyways, Moros, worried that his daughter hadn't come back yet, started searching for her. But he couldn't find her anywhere. Desperate, he asked to gods for assistance, but being busy, they offered none. Again and again his pleas were ignored, until Moros' opinion the other gods got darker and darker. Finally, he sought out the fates themselves. Having helped them several times, they gladly told Moros of his daughter's whereabouts. Rushing to the French mountains, he freed his frozen daughter from the ice. However; Sors Bellatores had been disbanded by Moros, as he had been so distraught that his daughter was gone and their inability to find her, and all his riches used to find her as well.

Now beggars, for a year Moros and Ileana traveled France, using thievery and scams to survive. While they were travelling Moros told Ileana of his problems with the gods, and how foolish, lazy, and selfish they truly had been. As the year drawed to a close, Moros realized he was getting weaker and weaker. People had already stopped worshipping him thousands of years ago, which decreased his powers significantly. But now with people finding new ways to avoid death and injury, they were weaking Moros even further, as people were trying to stop, or at least slow, fate as much as possible. Eventually, Moros was so weak, the only way he could survive was him going into a deep sleep. Though Ileana begged him not to, he told her of a place where she could exact their revenge, a place he found while on his travels searching for her. That place was the Broken Covenant. With that, Moros disappeared, falling into his deep sleep, watched over by the Fates, who made sure he wasn't disturbed. Though it took many years for Ileana to steal enough money to get a ticket to America, she finally did, and finally arrived to the Broken Covenant.

Personality: She is careful and sly, as well as calculating when she set upona task. However, in her free time, she is generally found alone, as she is not good in social situations. To strangers she is catious, yet friendly unless they prove dangerous, which then she becomes violent. To friends she is much more friendly and open.....mostly.

10.What faction you desire to be a part of to see an overview of each faction, go here, your choices are: Opus Superum, Liberi Superum, Ortu Justitiae, Veritum Unitum or Liberatio Generis. Ultimately to whichever faction you wish to join, it will be up to that faction leader if they choose to accept you.

11.Why should you belong to that faction, what are your core beliefs, why does their ideology suit your personality/beliefs?

If my father is correct, there has been five long generations of these idiotic gods' foolishness. This cycle must be broken, at all costs! They must meet their doom! (XD) 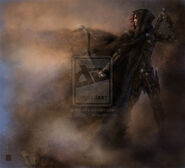 Illeana with her weapons 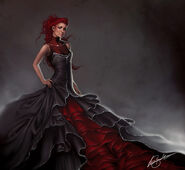 Illeana Viorel, daughter of Moros, God of Doom
Add a photo to this gallery

Retrieved from "https://camphalfbloodroleplay.fandom.com/wiki/Claiming:Broken_Covenant/Ileana_Viorel_-_Accepted?oldid=1243543"
Community content is available under CC-BY-SA unless otherwise noted.