Appearance: Jemima has dark brown hair and brown eyes. She is 5'6 feet tall, and weights 125 lbs. 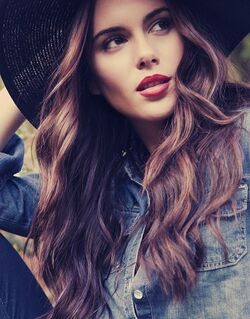 Personality: Jemima is all about hard work. She is generally more than happy to put in a full day of tasks, realizing that it will likely take a lot of those days to get to the top. Which is no problem, since she is both ambitious and determined, wanting to accomplish her goals. She is practical as well, taking things one step at a time and being as realistic and pragmatic as possible. She may be extremely dedicated to her goals, almost to the point of stubbornness. She likes to be efficient, organized and won't make a lot of waves. Scrupulous with details, being somewhat a perfectionist, she adopts a rather conventional attitude in life. Thankfully, Jemima is patient, too, and is happy to wait for her ship to come in. The flip side to this staid behavior is that she can become quite unforgiving of those who aren't as diligent or ambitious as she is. She needs to remember that she does need friends along the way, ambitious or otherwise. Despite her precision, she has a softer side that she opens to people whom earned her trust. But her rage towards Pandia isn't expressed in a cold or bitter attitude. She decides to stay herself, kind with others, unlike most members of the BC, whom take out their hatred on the innocent. She still despises her creator, getting off edge when the topic comes up.

History: Every month, thousands of people around the world gather together to honor and give thanks to the cycles of the moon. Traditionally Full Moon Celebrations have been a time for community to come together and share. All cultures of the past have, in some way, celebrated the seasonal aspects of the moon, from the planting moon to the harvest moon. But on one night of January, the moon was worshipped by a whole festival in Quebec, Montreal. It was held by a Chineese community, who wanted to spread their culture for once. They couldn't do it monthly for every new moon, which would be too absurd, thus deciding to create a yearly event of celebration that would be held in the city, for every citizen to join. The creation of the event worshipping the moon caused Pandia to merge the existence of Jemima, her newest moon nymph, as the amount of people attention it was unbelievable. After being created, taking the shape of a fully-grown mortal, she resided on Olympus.

She stayed so until the next morning, where her body was perfectly fine. That was when she realized that Pandia had cursed her. Leaving her the opportunity to feel the freedom of the day, but be in the agony of her curse during the night. All for forgetfulness that a stubborn goddess couldn't forgive. Her fierce loyalty towards her master soon turned into pure hatred. Jemima wasn't capable of facing her creator herself, nor emotionally or physically, being a simple nymph against a goddess. There wasn't anything she could do. For the next two years she was out trying to survive on her own, dealing with the curse. Every night she had to withstand the night, in the form of a horrible creature, she grew angrier and angrier with not only Pandia, but the gods. She realized that they were all the same, stubborn and selfish, and that if any one of them was her master, they would've done the same thing to her. The pain the curse caused her was immense, and having it for the past 2 years was unbearable. She had even began to lose hope that she would ever be herself again. Until, one day she came across a BC member. The two had a small conversation, which eventually made them find out about their similar hatred towards the Olympians. She told her about the Broken Covenant, and even convinced her to join. And that was what she did.

Reason why she wants to join the Ortu Justitiae: Jemima believes that her place is in the Ortu Justitiae faction of the BC. She thinks that the gods have become too corrupt and blinded by their stubbornness, and that the Broken Covenant will be the next generation of leaders. She assumes that the Ortu has the most strategic way of conquering the immortals, and that the the faction has the best chance in winning an upcoming war. 2 years with the curse wasn't anything she would ever forgive. Jemima would do anything to feast revenge against Pandia, even if it means loosing herself along the way.

I'm not too sure about how legitimate festivals like the ones you mentioned have to be. I mean to my knowledge, there hasn't been too much moon worshiping in specific, there probably has been more superstition. Also, if there was, Idk how likely that it'd be in Canada, where Christianity was/is prominent. I'll have to check with Bach on that matter.

Otherwise, why was Pandia so quick to curse a loyal servant after one mistake?

Fixed. Canadians of Chinese and Vietnamese heritage celebrate the Moon Festival. Hug the shore; let others try the deep ~ WoW

Are you saying she's been at camp already? and like just left camp? Cuz we don't allow new characters to say they've been at camp going back two years, so like she could be at camp prior to January of 2012, but not between January 2012 and January 2014, it helps limit continuity issues (as we run the wiki not just like individuals rp'ing, but one giant world/game, there are characters on the wiki that have been actively rp'd, and events that have happened, that it would be weird to try to write her into all that.)

Well she's also a moon nymph, so I don't see why you need her there at all so recently, moon nymphs are 1. immortal and 2. not sniffed out/attacked by monsters. So you could easily have her been around long enough that the curse and camp stuff happened prior to 2012, and that for the last two years she was out trying to survive on her own, dealing with the curse, becoming angrier and angrier with the gods, and then came across a BC member that convinced her to join. This way you avoid the two year rule AND give her more reasons to join the BC as she's been angrier longer.

Fixed. Hug the shore; let others try the deep ~ WoW

OOC that will be either User:Arteminx or I believe User:LyreOfOrpheHyus

Retrieved from "https://camphalfbloodroleplay.fandom.com/wiki/Claiming:Broken_Covenant/Jemima_-_Approved?oldid=1262075"
Community content is available under CC-BY-SA unless otherwise noted.