Personality: Johnny was originally a very kind and sweet boy, a softy who wouldn't hurt a fly. But after he was forced into a street gang, he became violent and chaotic like the people around him. He has serious anger issues, which would cause him to lash out and attack people. But honestly, he can still be very caring to certain people. He still has terrible nightmares and feels guilt over the boy he killed, wishing he could just apologize to him. 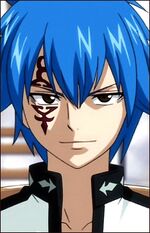 History: Leon McKinney was a strong son of Lyssa, he was 21 and fresh from camp. His mortal brother was in the army. Leon was very concerned for the safety of his brother Charlie. He prayed to the gods for his safety. One night, the goddess Bia came to him. She offered to answer Leon's prayers on one condition, Leon would have to bless the goddess of force with a child. She demanded that Leon raise it, so the child would grow up strong and bring her pride amongst the gods. Leon didn't think he was ready to be a father, but he accepted.

He made love to the goddess, impregnating her with a child. The goddess left him and granted Charlie enough strength to return home from the war. 9 months later, Leon's son arrived by the doorstep and Charlie came back to see he was an uncle. Leon told him that an ex-girlfriend left the baby and left him. Charlie pitied his brother and suggested the name Johnny.

Unfortunately, young Johnny would never get to know his uncle. Because Charlie died in a car crash when he was only 2. Now it was up to Leon alone to keep his deal with Bia and raise Johnny. He couldn't make alot of money, so they grew up in a tough neighborhood. Meaning gunshots could be heard every night, along with cries and screams.

Johnny had learned to box since he was 5, Leon taught him to make sure he could handle himself. But Johnny was a good natured kid, so he only used his skills in self defense. Which was far too often, but he managed to live a happy life with his father.

When he was 12, he was attacked by a cyclops. Even though Leon hadn't trained for a while, he used his skills to slay the foul beast. Luckily he kept an CB mace on hand This was when he had to explain to his son the world of the Greek gods. But he kept the events of how Johnny was conceived from him.

When he was 13 the local street gang approached him, trying to recruit some flesh blood. They offered him money and many expensive items. But Johnny refused, well aware of how much trouble street gangs were. But that same day, Leon had gotten fired from his job at a factory. So with a desperate need for money, Johnny joined the gang.

He told his father that he had gotten a job at an old hardware store, but he was really out raising hell with his new friends. He stole from random people, beat up others and sold drugs. Johnny's training allowed him to handle any troublesome monster attacks along the way.

But eventually Johnny started to love this new life of crime and chaos. He became savage, cruel and greedy just like the gang members he foolishly befriended. Occasionally, Leon had suggested he go to camp. But Johnny didn't want anything to do with camp, he was happy exactly where he was for the next few years.

But when he was 15, he finally got arrested for his crimes. He was sent to juvenile hall on charges of assault, theft and possession with intent to sell. His father was gravely disappointed, but there was nothing he could do.

In juvey, Johnny prayed to his mother to help him. He thought having an immortal goddess for a mother would help him. But after he spent two months there, he gave up hope. The son of force grew angry and more violent. His powers allowing him to easily become the most feared boy there. But his training from his dad allowed him to survive the occasional monster attack.

When he was 16, his mother finally came to him. Bia had an argument with Hermes, she was left quite bitter and wanted revenge. She knew that one of his sons was sent to the same detention center as Johnny.

Bia ordered her son to kill the son of Hermes, Johnny was promised freedom in return. So during a riot in the center, Johnny snapped the poor boy's neck.

Bia then used her godly powers to teleport him far away from the center. Since Johnny was now a convict and definitely couldn't return to his father, he thought going to camp was his best bet.

He managed to bump into a satyr luckily. They were far, so the journey to camp would take a few days. Over these past few days Johnny began to think. His mother hardly ever did anything for him, she only helped him because she was after petty revenge.

A day right before they reached camp, Leon sent him an Iris Message. He was worried for his son when he found out how he just vanished. Johnny explained how his mother had him kill someone else in exchange for his freedom. Leon was furious, hearing that Bia turned his own son into a murderer. He began to vent, exclaiming how Bia only helped him because she wanted a child, a tool to use for her own personal gain.

Johnny had then realized it, The gods were just vain and selfish rulers who only use their children as servants. He knocked out his satyr with a swift punch and ran off. He was later found by two BC members who told them of the Covenant and their goal. The son of force was eager to join them.

Reason for joining: Johnny hates his mother and rest of the gods who he views as cruel, manipulative and selfish. Even from the times with Ouranos and Gaia, they were still powerful gods who abused their power. This cycle of power must end, the gods must come to an end. If other factions like Ortu and Liberi succeed in their goals to become gods, they'll just power hungry monsters like Zeus and the Olympians.

Retrieved from "https://camphalfbloodroleplay.fandom.com/wiki/Claiming:Broken_Covenant/Johnny_McKinney_-_Accepted?oldid=1312101"
Community content is available under CC-BY-SA unless otherwise noted.