History: Lennox met Psyche at his psychiatric office. Psyche was wondering how humans thought of their patients, and decided to be a patient. Psyche disguised herself as Pamela Smith. While studying "Pamela", they both fell in love with each other. After about a month, Psyche learned she was pregnant. Lennox was very excited, and was deciding on the names. He was thinking of Kiyra for a girl, and Kai for a boy. By the time they knew the gender, Lennox was excited for a boy. Finally, when Psyche had to give birth to Kai, Lennox asked Pamela to marry him.

Psyche said yes, so she wouldn't break the mortals heart. The night when Kai and Psyche finally got home from the  hospital, Psyche fled. Lennox was heart broken, and couldn't deal with the pain of the loss of his "fiance". Before he did anything, Lennox gave Kai away to his grandmother. Lennox then committed suicide.

Growing up, Kai was hated by his grandmother. She treated him as if  he was worse than dirt. She criticized his sexuality, and always talked down on him. When Kai was ten, a hellhound broke into Kai's home. The hellhound attempted to attack Kai, but the hellhound was startled by Kai's Great Dane, Teddy. The hellhound fled, and by the time Kai's grandmother got home, she blaimed everything on him. When Kai turned 15, a harpy attacked Kai at the Mall. There was, luckily, a demigod son of Tartarus summoned a dark bit, and the harpy was magnetized into Tartarus.

The son of Tartarus identified himself as Jeffrey, and he took Kai to the Broken Covenant. When he got there, he learned he was a son of Psyche, and why his father committed suicide. Kai was very upset by this, and hates his mother for this reason. Kai later was given a choice of which covenant he would like to join, and he chose Veritum Unitum.

Personality: Kai is a fun guy. He's out going to other demigods and humans, but if he ever met one of the Gods, he'll be cold hearted. Kai is flirtatious, and is a wild and free kind of guy. He is very loyal, and is well liked.

Which Covenant, and why: Veritum Unitum because, Kai is tired of feeling like a stepping stool of the Gods, and a weapon for his mother. Kai doesn't like the feeling of his mother being who she is, and he thinks that his mother is going to use him for her own greed. Kai thinks every God is using their children, and like to give them little credit. Kai also doesn't like his mother, because she doesn't make time to see him. 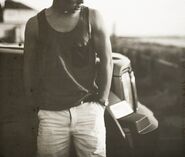 Art-batman-beach-beautiful-beit-Favim.com-276991.jpg
Add a photo to this gallery

8 is a very early age. Normally, let's go with 10. Gorgons are on a difficult and rare level, so let's go with something easy like hellhound, cyclops, or something like that. Also, please sign your claim. Thanks!:)

Again, kindly sign your claim with four tildes (~). I doubt a hellhound would get scared by a dog, seeing as hellhounds are generally... big.

Retrieved from "https://camphalfbloodroleplay.fandom.com/wiki/Claiming:Broken_Covenant/Kai_Hale_-_Accepted?oldid=1243532"
Community content is available under CC-BY-SA unless otherwise noted.