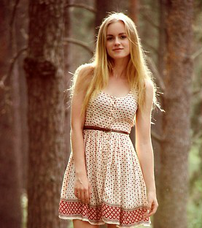 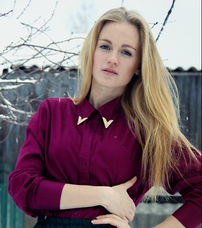 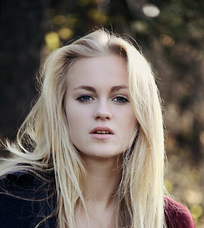 Abigail d'LaRossa was a young French maiden, who was born into wealth. She was a world renown model who worked for stylists around the world. While on set for a photo shoot in the Caribbean, she had caught the eye of Koios and Lelantos. With both gods pursuing the affection of Abigail, they were both attempting to get to know her, by disguising themselves as designers, photographers, etc. However Abigail had known enough about the fashion world to know both were trying to play her, so she turned them both down.

A week had eventually passed and Koios hadn't given up on pursuing her, while Lelantos had lost interest. Eventually Abigail has agreed to meet with him at a restaurant on the beach. Koios waited for an hour before coming to the conclusion that Abigail wouldn't show. So he left, leaving a half finished bottle of wine. Abigail who was already boarding her plane back to France, could care less that she had just left Koios dateless on the beach.

Things got awkward when Koios ended up going to France when visiting a passed flame. When Koios accidently bumped into Abigail, everything went into a crazed angry burst of words he probably regretted. But Abigail soon bought him a coffee, with the two eventually spending a day together, they went to a festival. During this festival however, instead of playing games, they played each other. Abigail was just playing him for sex, while Koios was playing the sob card to make her feel bad. Eventually they enjoyed the night full of sexual intercourse, and Abigail was satisfied, as was Koios.

The two then went their separate ways and a month had passed when Abigail found out she was pregnant. With her model career set on hold so she could raise her child, Abigail eventually gave birth to a girl whom she named Katherine. Giving up her modeling completely, she eventually got married to an electrician named Harvey. At first Katherine loved Harvey and they bounded immediately, however this little bound didn't last long as Harvey turned to alcohol after getting fired from his job. He would come home late in the night and eventually he started abusing Katherine physically and verbally at the age of seven.

Harvey's abusive behavior didn't last for long however as Abigail eventually kicked him out and got a divorce. Katherine finally felt safe after Harvey was removed from her life, until he broke into there house when Katherine turned nine and he killed Abigail, with Katherine soon being sent to live with her grandmother Rose-Marie whom was a demigod as well. With Katherine not knowing she herself was a demigod, her grandmother secretly decided to begin training her when she turned twelve.

Soon the time came where Katherine had turned twelve and Rose-Marie confronted her about Katherine being a demigod. The two finally worked everything out and began training later that night. Within a few days, Katherine learned how to wield a bow and how to use the elements to her advantage. But with monster around, Katherine needed to learn a lot more skills if she was going to survive. Months had passed of training, and Katherine had eventually learned the weakest spots of most monsters. Killing an estimated number of twenty. Rose-Marie soon learned of other demigods in the neighborhood when Katherine had turned fourteen.

At this time, Rose-Marie had already approached Katherine about perhaps training the demigods in the neighborhood, which she agreed to. Katherine gathered all the demigods up every day after school and trained them alongside her grandmother, they battled monsters together, and learned strategies together. However, all was not well, as a year after they started this "training school", two of them rebelled and attempted to kill Katherine who was now fifteen, with her narrowly evading death. But Rose-Marie was not as lucky, and was killed by the rebel demigods.

With Katherine now having to go to her uncle's who immediately sent her to boarding school, she felt as if the odds had been stacked against her. When she had arrived at the boarding school however, she was greeted by a mysterious young man. Who she would soon be informed that he was Lelantos. Not shocked that she was in the presence of a god, started a conversation with him. Who was quick to inform her that she was in fact unique as Thanatos had became infatuated with her. This however caught her off guard, and was shocked that a god of such things, would full in love with her. Thanatos was overjoyed that every time someone close to Katherine would die, that he would get to see her.

On the day of Katherine's nineteenth birthday, after being attacked multiple times over the years. She was abducted by members of the Broken Covenant, with one of them looking familiar, she eventually found out it was her cousin. They took her to the sanctuary, where they were greeted by a demigod from camp. He quickly assaulted Katherine's cousin, killing her with a machete to the head. Katherine now officially done with watching her family members die, took matters into her own hands, and pulled the machete out of the campers fingertips, and cut his head off. With the rush of a first kill coursing through her she marched into the sanctuary proud to be a willing member of the Broken Covenant.

Katherine is generally a nice person, until you cross her. When angered her temper comes out and she will cuss you out like there is now tomorrow. However when her attitude isn't in such a negative from, she often is caring and sweet, often wanting to put her family and friends needs ahead of her own. She is comfortable with the idea of people around her dying, and is generally called "Death's Apprentice" by people from her town of Michigan, as most of her family members have passed on, so many of them have died that Katherine could care less what happens to the rest of them. Along with her caring, angry personality, she will go into full out bitch mode if you say her name incorrectly, or forget that she prefers to be called Katie.

I find it unlikely that there would be so many demigods in Katherine's immediate area that she could teach.

There were only three of them in the area.

So many demigods in one place would probably attract monsters

That part I didn't verify in the history, each demigod was attacked just not while around Katherine.

Yea but I mean they would most likely be attacked while they were together.

Oh okay, I'll add that in

Retrieved from "https://camphalfbloodroleplay.fandom.com/wiki/Claiming:Broken_Covenant/Katherine_d%27LaRossa_-_Accepted?oldid=1233621"
Community content is available under CC-BY-SA unless otherwise noted.