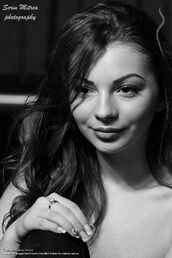 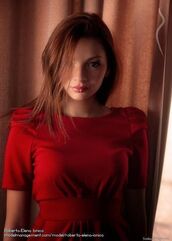 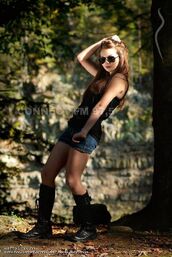 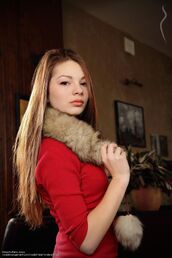 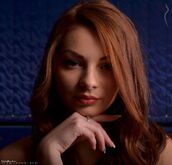 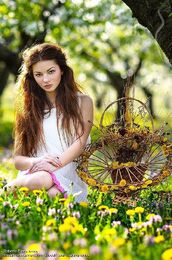 Personality:At first, she can be bitchy and spiteful. If she can think of a way to use someone, however, she'll do anything to get her way. She's a bit power hungry, but she's patient and can wait for things to be handed to her.

History:Nikki Kudrin grew up part of a wealthy family, the heiress to a large shipping company. As she grew up, everything was handed to her, and she never really excelled in her studies to be able to make it on her own. When Lena was around 16, her beloved company went bankrupt somehow, and with her last bit of rubles, she fled to America.

She finally reached a Maryland shipyard at 17. Without a penny to her name, Nikki was forced  to go into prostitution, and made enough money from her looks to buy a small shack while she continued whoring around. One night, after finally deciding to put a stop to her makeshift income, she met a ravishing man. Thinking one more time can't hurt, she slept with him, and thus, Lena was conceived.

Nikki loved Lena too much to allow her to make money the way she did, when she was Lena's age. Instead, Lena posed as a boy and worked in a stable in the city of Chicago. Growing up, Lena knew she was different from other kids. Fire didn't burn her, and she could throw it with a great deal of ease. Her first monster attack came at the age of 13. A rogue centaur wandered into the stables, posing as a normal horse. Lena was unaware it was any different until she studied it carefully, watching as it's normal horse head became the torso of a man with a full beard and a dagger in his hand. Still rather unfamiliar with her powers, Lena thrust out her hands screaming, and just enough fire burst from her palms to cremate the beast, saving her from harm. She went without mentioning this to her mother.

When Lena turned 16, she was attacked by a cyclops while working in her stables on October 10, 1857. She tried to flee, but the cyclops was there everywhere she turned, mimicking her mother's voice, and her own.

In a final attempt to kill the beast, she thrust her hands out, and fire exploded from her hands, but it caught to the stables itself, and within seconds, a good portion of Chicago was cumbling to the ground around. Naturally, she ran, and the fire didn't hurt her, but she was caught under a falling beam, and asphixiated to death.

In the underworld, Lena was condemned to the Fields of Asphodel. To pass the time, she took up a game of chess against Thanatos, betting her freedom if she won. She DID win, but Thanatos claimed he didn't swear on the Styx, and broke his promise to let her leave.

However, Thanatos decided the least he could do the reward her somehow, and gave her the ability to leave the Fields of Asphodel. However, Thanatos was owed a solid by Ariadne for allowing a lost hero's return or something, and Ariadne cursed Lena to feel lost, as if she was in a maze, for as long as she said wandering the underworld. Several times, she found herself on Elysium, even though she knew she didn't belong there, and eventually she came across Hypnos' cave.

Inside was a poorly nourished, pale, sleeping girl. Lena decided to take it upon herself to revive the girl, easily rousing her out of the slumber. With the girl's easily manipulated will, she made an easy crony, and they traveled together until finally finding a ghost that introduced himself as "The Noble Soul." This ghost was nice enough to guide Lena and Nessa out of the underworld and to the righteous and just cause of the Broken Covenant.

Reason for joining Civitas Popularis:Lena has a manipulative personality, and won't stop until she gets her way, no matter the means. Civitas appears weak to her, when compared to the  other factions. Lena is easy coming when lying is brought into play, and her real motives are never truly known. She could easily have picked anyother faction, but Civitas is was she finds will bring her the easiest gain.

Personality: She is quite, polite and very shy. He desperately wants to be liked and accepted but he interacts poorly with others. He is naive with his knowledge and logic having massive holes in them. He also becomes increasingly morbid and depressed as he loses his memories of the pretend life he used to have.

History: Jacob Moss was a demigod child of Hebe who was left behind in the underworld after his party gave their quest up for lost and fled. After wandering aimlessly for days he came to the river Lethe where he encountered the goddess. Lethe washed away some of the demigod's recent painful memories and he found comfort and more in her presence for a time. But Jacob would not stay, he asked Lethe for directions to one of the underworlds exits. Lethe gave him the answer but tried to stop him, claiming that he would die on the journey. This didn't stop Jacob so she told him that there would be a child. Jacob paled, he wouldn't have a demigod child and he begged her not to let their child live the difficult life of a demigod. After that Jacob left on his impossible venture and soon died. Lethe took pity on Jacob and the child, and so decided to fulfil his wish. The moment the boy was born she took him to the cave of hypnos. She placed him in the cave where she entered a dream world that mimicked a happy mortal life. The cave and his mother's blessing kept the child alive in this dreamworld along with several servants to keep her nourished while sleeping, and the only real thing was his name, which Lethe implanted into the dream.

In the dream, Nessa was raised as if she were in the natuarul realm, and this constant dreaming kept her subconscious from coming in and turning her dream into an everlasting nightmare. Nessa Moss slept for 17 years until she was mistaken woke up by another demigod, a girl called Lena who was searching for an exit the underworld. so Nessa woke up into a world she knew nothing about without and clothes or possessions and some strange supernatural powers. She had no idea why she was put into the dream world in the first place and immediately began to forget the dream that used to be his life. sHe dressed himself in some old armour that she pulled off a pile of bones and began to wander the underworld with Lena as memory loss began to set in.
Nessa was confused an disorientated, she came to become reliant on Lena and began to follow her commands. Her powers also began to manifest as well, drawing in even more monsters. Still her abilities allowed her to make objects vanish into oblivion, combined with Lena's abilities they were able to disarm then destroy their enemies. The commotion they created drew in more than just enemies. An old ghost, who introduced himself as "The Noble Soul" eventually met them. He directed them to an exit, along with the "righteous and just cause" of the broken covenant. Nessa followed Lena out of the underworld and to the Broken covenant.

Reason for joining: Nessa still has some sense of what it was like to be a regular human and still holds some ideals from her fictional life. This faction fits in more than others with his ideals and is the easiest choice. That being said she would have chosen any faction that Lena joined, she prefers to follow especially in her current state of confusion and memory loss.

Retrieved from "https://camphalfbloodroleplay.fandom.com/wiki/Claiming:Broken_Covenant/Lena_Kudrin_%26_Nessa_Moss_-_Accepted?oldid=1231456"
Community content is available under CC-BY-SA unless otherwise noted.