Liam was raised like a normal boy, but his mother told him stories of their ancestry. He knew he was a demigod from his early years. As he grew up he became more athletic, better looking, and more popular at school. Many girls were attracted to him and he had dated a lot of them. Many of these girls were nymphs of the island. The nymphs were more attractive than mortal girls.

One day, Liam was surfing when his board was flipped and he went under the water. When he was under he saw a dog-fish hybrid creature. The creature swam at him with its jaws open he dodged it the first time but the second time it bit his arm. He kicked the animal away and Liam swam away as fast as he could but not fast enough. The creature tackled him back underwater were the two wrestled. Liam couldn't hold his breathe anymore and fainted. As he was closing his eyes he saw a nymph tackle the creature off of him and another nymph grabbed Liam. When Liam woke up the two nymphs explained that the monster was a Telekhine. The two nymphs told told him about camp and that it was safer there. Liam asked his mom about camp and she said that he could go. He packed his things and got on a flight to New York.

When he arrived at camp he had to stay in the Hermes' Cabin, because his father doesn't have a cabin. After a couple months of training and working, Poseidon asked Liam to go on a quest to save Triton from a sea serpent. The sea serpent had captured Triton and taken him to the Sea of Monsters. Liam gathered 4 other demigods, a child of Poseidon, Zeus, Apollo, and Palaemon. They left camp and started sailing to the Sea of Monsters. They first came to Scylla and Charybdis, and barely came out of that alive. They sailed right past Circe's Island, but the sirens got them. The son of Poseidon was steering and he turned the ship toward the Siren's Island. No one could stop him the sirens were pulling them all in with their song. They docked on the island and the sirens started to attack. The son of Poseidon was first to die. Liam came back to his senses and ran for the ships wheel. He got a hold of it but the son of Zeus was dead too. The son of Apollo and Palaemon were still with Liam. The ship was torn up so the docked at the next island, which was a mistake. The demigods started to fight over whos fault it was why the others had died when they heard huge foot steps. They looked up and saw a huge cyclops, Polyphemus. The cyclops grasped the son of Palaemon and killed him. The son of Apollo let go many arrows and those weren't working, it just made him even more angry. The cyclops killed him too. Liam was the only one left. He undocked from the island and sailed away as fast as he could, forgetting about the quest.

When he got back to camp, he told everyone what happened. They were sad as well. Poseidon was angry with Liam for letting one of his son die, and leaving another with a sea serpent. He cursed Liam to have a deformed tail in dolphin form, o he can not swim fast. Liam was angered with Poseidon for doing this and left camp and found the Sanctuary, where he joined Opus Superum.

District 12: Where you can starve to death in safety Son 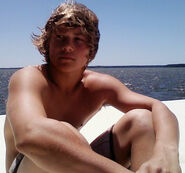 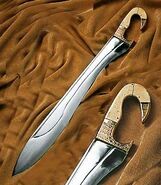 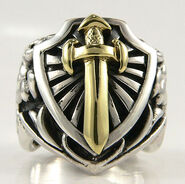 λφίνι ξίφος as a ring
Add a photo to this gallery

I don't think the gods are allowed to interfere with their children's lives. Mr.Mikachu

Ok first off not having a cabin isn't an in character thing really, it's cuz we can't realistically keep track of 100 cabins, secondly and totally nothing to do with you I effing hate rick, he raped myths again with making delphin a freaking god, he was a dolphin in myths, essentially Posey's pet, but nooooooo Rick apparently has fun raping the shit out of Greek myth for his enjoyment >.< ok there I feel better so anywho, even if every single god not having a cabin were an in character thing, being all whiney about his dad not having a cabin isn't a good enough reason to join the BC

Retrieved from "https://camphalfbloodroleplay.fandom.com/wiki/Claiming:Broken_Covenant/Liam_McLoyd_-_Approved?oldid=1235015"
Community content is available under CC-BY-SA unless otherwise noted.