Matieus' family moved to Austin, Texas. They lived on a farm were he had to all the work because Mark were to lazy to do it. He had to harvest, butcher, etc.He did happen to like doing his farm work though. When he was 12 he was attacked by his first monster. He was in the cornfield harvesting corn when he heard a low growl. When he turned around he saw a huge dog. Matieus tried to run but the dog tackled him to the ground. It started lashing at him leaving scratches and wounds on his arms chest legs and face. Out of nowhere, Matieus heard something flying through the air and all the weight was lifted off of him. When he looked above him there was nothing, but on him was golden dust. Matieus was very confused. He went back to the house, were he was punished for not finishing his work.

When he entered high school, he got into a class that involved filming. He fell in love with this and loved to film. He also was introduced to sewing, which he kept from everyone else. Matieus was classified as one of the hicks and loved to hunt. He did not like the modern way though, with the guns. He loved to hunt with bows, spears, and knives. He went out every weekend and hunted with some pals. He also got into fishing.

When he was 16 he was out in the woods with his friends when they were attacked, but not by a monster. They were attacked by a serial killer who had been on the lose for a long time. Matieus and his friends tried to find their way from him but got lost. As the night went on, they died one by one till it was Matieus and his friend Austin. As they were running through the woods and Austin tripped. When Matieus turned around it was to late to help. Austin had an axe in his head and the killer was standing right above him. Matieus turned to run but the man grabbed him and threw him to the ground. Before the man could grab the axe Matieus got up and ran towards the man and tackled him. Matieus quickly got up, grabbed the axe from Austin's head, turned around and just swung. Matieus heard a nasty crack and when he looked he had decapitated the man. Instead of feeling horrible, Matieus actually liked the feeling of what he had just done. Matieus walked back to his house and did not call the police and did not tell his dad what had happened.

As a year went by Matieus trained very hard with different kinds of weapons such as throwing knives, an axe, bow and arrow, spear, and daggers. The feeling of murder became his drug and he would violently kill different people that made him mad, including his adoptive parents. He did not tell anyone and no one knew it was him doing the crimes. When he was 17 a two women appeared in his dream. One woman was his mother, his real mother. She said she was Anaideia, Goddess of ruthlessness, shamelessness, and unforginess. The other was Arke. His mother and Arke asked him to find her wings. She did not know where they were but he would get a very special surprise if he found them. Matieus asked why she should help Arke, and Anaideia answered "Because, she is valuable to us. If she gets her wings back she can send messages to other allied gods and demigods. We could overthrow Olympus!" Matieus accepted his mother and Arke's challenge and set out for an adventure to find the wings, killing monsters, gangsters, and criminals that attacked him. He searched for a year looking all over the place in the U.S. Places such as New York, Las Vegas, Gettysburg, and many other places. He had no luck but his mother encouraged him to find them so Arke could have her wings back. Matieus grew angry with his mother, saying she was greedy and just using him. He gave up and went home. When he arrived he found an invitation in his mailbox.

After many years, the family, his real family, decided that it was time they came back together. Matieus decided he wanted to meet his family. When they came together they were having a fun time. They were telling each other stories about their lives, jokes, and playing around. It did not stay happy for long, when a crazy lady came running from trees screaming and tripping every once in a while. The lady ran towards the family and started to attack Matieus. Tora ran up to them and pushed the woman off who then attacked Tora. The lady killed Tora and then it seemed like she came to her senses and she ran away. The family was shaken up and did not know what to do about Tora and Matieus. To make matters worse a group of Scythian Dracanae came out of the trees and started to attack. The adults started to fight them off with weapons that had morphed from watches, rings, and pens, but the kids had no idea what to do. The adults were holding them off but not doing much. A shadow then passed over head. Above them were Pegasi! When they landed teenagers jumped off and started to fight. After about 10 minutes there were many piles of golden dust. The teenagers told the kids they needed to get to Camp Half-Blood. So they took them to camp were they were now reside. They found out that the woman who attacked them was Maya Jenson, a past camper.

Matieus did not enjoy camp. He tried to explain to campers that were going on quests that the gods were just being greedy and lazy, risking their children's lives for tasks they could do themselves. The campers of course ignored him, so Matieus left camp. Matieus did not want to be associated with his family so he changed his last name to Corintos. He went to the Sanctuary and joined Veritum Unitum. 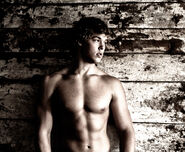 Ok, not really sure what powers someone like Arke would have, she has no scope and was just the sister or Iris and messenger for the Titans, I can't find any mention of a scope

Please expand your reasons for wanting to join the VU, a vague statement will not suffice. Flamefang (talk) 18:41, November 17, 2012 (UTC)

Although your statement is longer, it's still vague. I need to know how he feels as a person about these things, not you paraphrasing the VU ideology. How has he come to think this way? What did it change about him? Etc. Flamefang (talk) 03:51, December 1, 2012 (UTC)

I wish to try for this faction please :)

Then please change the statement according to Flamefang's suggestion and then wait for further approval.

Are you still working on this and are you trying for the same faction?

Retrieved from "https://camphalfbloodroleplay.fandom.com/wiki/Claiming:Broken_Covenant/Matieus_Corinthos_-_Accepted?oldid=1243500"
Community content is available under CC-BY-SA unless otherwise noted.