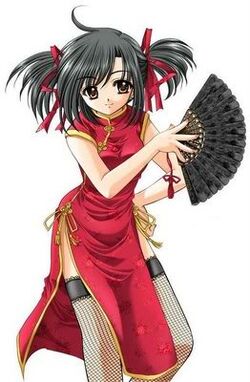 Personality: Minna is very shy and quiet but once you get to know Minna better, she'll be more open to others. Oh, and she speaks in third person.

History: Minna's father had an affair with Styx. They met at a local bar in china. But she suddenly left him. Minna's unknown father then died for an unknown reason. Styx then bore a baby named Minna. She left Minna on a doorstep of a poor Chinese family and a chain (that could be worn as a necklace) was with her as well. The family took in Minna despite having 4 kids. Minna was raised on a farm with her other siblings. But unlike her other siblings, she was very different from them. She liked going back to the old ways and wears a qipao (Chinese dress) instead of modern day clothing. She likes to imagine that she lives in a mansion instead of a dirt farm. Minna had very little education since her older brother is going to college and college is really expensive. Therefore, Minna was home schooled by her parents. They taught her how to read and write in chinese and some english as well. Other than that, Minna's childhood life was full of work since she had to get her own money to save up for her needs. In one of the sweatshops she worked at, she met a girl named Jasmine Lee who befriended Minna.

At the time Minna was 13, she had her first monster attack when she was walking home one day from work. Jasmine was going home with her and a hellhound came up to them. Seeing that it was a hellhound, Jasmine jumped in between Minna and it while taking out a bronze sword. Jasmine shouted in mandarin to tell Minna to get out of here while she took care of the hellhound. But Minna stayed anyways, too frightened to move. Minna saw her best friend battling the hellhound by herself and eventually, it disintegrated into a gold dust. On the walk home, Jasmine told Minna everything about Greek mythology saying stuff like how gods would come down to have a fling with mortals and then bare children. The usual stuff like that. Jasmine even told Minna about camp half-blood and how there are others like them too. The two of them then concluded they would save up all of there money to get plane tickets to New York so they can go to camp half-blood to be in a safer environment.

At age 14, Minna had a harpy attack her in the court yard of a sweatshop but Jasmine was also there with her so fighting it was a breeze. After that attack, Jasmine secretly trained Minna to be a skilled swordsman. In that time, Minna figured out that her chains were also a weapon since Jasmine was a daughter of Hephaestus, she identified the weapon as a chain that let's the user command it to do what ever the user wants it to do. At age 15, a giant scorpion attacked them and like the harpy attack, it was also a breeze.

A couple of weeks before Minna was to turn 16, she and Jasmine both saved up enough to buy their tickets to go to Long Island, New York. After saying goodbyes to their families, they took a plane to NY and started to search for the camp. Jasmine and Minna looked everywhere in the forest Long Island had. They ran into a satyr who showed them the way to camp but just as they reached the border, Jasmine got attacked by a Minotaur. The Minotaur beat up Jasmine badly and Minna rushed towards Jasmine, but Jasmine told Minna to defeat the Minotaur. With the help of the satyr, Minna disintegrated the Minotaur. Minna then ran to Jasmine's side and she was hurt really bad and lost a lot of blood. Jasmine told Minna she might not make it to camp after all and Minna cried telling her she will. Before Jasmine's death, she gave Minna her dagger as a parting gift. Minna cried the whole time she walked in camp and when she demigods carried Jasmine.

Minna stayed at camp for a couple of weeks and during that time, she learned about the Broken Covenant. She asked where the location since she was curious on what the big deal is for this Broken Covenant thing. One night, she snuck out of camp when everybody was sleeping and went to the Sanctuary where the doors to the Broken Covenant stand. She put her hand on the door handle but hesitated before she opened them. Is this what she wanted? She asked herself but she opened it anyways and took a step into her new life as a demigod.

Reason: The Gods are powerful indeed but what do they use that power for? Nothing! They let Jasmine die while they could have used their power to save her. But no, they decided to let her die anyway and they don't even care that I'm hurting inside. That power needs to go to the demigods. That power of theirs, it's for us to use and to rule Olympus. And the mortals? Well, they can help us climb the top of the pyramid to victory because the gods feed on their worshiping and all of the other things they do for them. So the mortals can help us bring the gods down.

Notes: So yeah, my first (ish) bc char. Anything unusual you see? Comment! ^-^

If you're still deciding on the faction, should this be a WIP?

Had a minute, so with the reason, do you mean that she wants to become a goddess and rule (sorta like how the titans used to rule until Zeus and them took over)?

something like that I guess. but she also wants revenge on the gods as well.... >.<

Well the revenge would be what happens when she over throws them and takes their place >.< ya know like Zeus did with Kronos >.<

Well it's liberi and Ortu that want to take down the gods and become gods themselves, the difference being that Liberi is more ruthless about how they go about it, and are willing to use, abuse, torture, force to worship, etc the mortals to make it happen sooner, whereas Ortu doesn't want to involve the mortals at all, even if it takes longer.

She doesn't really care much about the mortals so Liberi Superum it is. xD thanks for helping me out there bach ^-^

OOC either User:Zer0TheNinja or User:Bctcz will approve this for Liberi, after they approve then you can add it to the List:Users & Characters/Pp

Retrieved from "https://camphalfbloodroleplay.fandom.com/wiki/Claiming:Broken_Covenant/Minna_Lou_-_Approved?oldid=1261788"
Community content is available under CC-BY-SA unless otherwise noted.