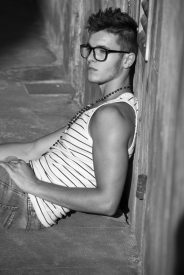 Personality: Raph is a bit of a cold heart assassin. He can be blunt and doesn't care much about anything. He has no remorse in every bad thing he does and does not show pity. Under all of cold deadliness, Raph is very sweet and very innocent when he's around people he's fond of. Though he doesn't like showing it, he cares deeply for family and friends of his. When it comes to campers, he's a mystery. Some times, he doesn't mind them, letting them live. Others, he slaughters them without any type of mercy to spare them.

History: In 3000 B.C., during the first Titan War, Kronos came down to Earth and mingled with a mortal for the first time. It was night time in Greece, Nadia Pachelli picking a few flowers from her garden. Unknown to her, Kronos was stalking her from behind. Taking her by surprise, he clasped his hand around her mouth and dragged her to a secluded area. She screamed in his hand, trying to fight back, but Kronos just laughed his ass off. He then proceeded to rape her, quite roughly. He left her there, dirty and beaten. The next few days, she found out that she hadn't gotten her period. She was pregnant.

Months later, Nadia gave birth to her only son, Raphael. Despite the fact she became pregnant with him from rape, she still kept him and loved him as her own. Raph grew up like every other kid. He went to school, prayed to the gods, and played with his friends. The gods, however, wanted to kill him. They were furious that Kronos had spawned with a mortal. Zeus tried to kill him, sending down lightning bolts at him, but Kronos seemed to be diverting them away. He sensed Raph had great power in him and wanted to keep him alive so he might use him.

When Raph turned 12, he was visited by his father, Kronos. He told him about the gods and how they were trying to kill him. He never really liked the gods, but found a little respect for them. What he heard crosses the line. He never did anything bad to anyone, yet the gods were going to kill him just because of his father. This completely made him turn his back on the gods. Kronos sensed his hatred and tried to use it to make Raph join his ranks. Raph refused, saying that he was no better than the gods. He started to turn his back on him, walking away. Kronos laughed, saying that he'd change his mind sooner or later. He tossed him a bronze coin. Raph caught it, even when his back was turned. There was an engraving on it, a sword on the front and a scythe on the back. Before he could ask what it was, Kronos vanished.

The next morning, Raph was attacked by a hellhound. It growled after him in the clearing of the forest he was playing in. Raph didn't look scared at the time, nor was he willing to die at the hands of the hound. Completely on instinct, Raph took his coin out of his pouch and flipped it. Mid flip, it transformed into a scythe with a bronze metal blade. The hell hound roared in anger at the sight of the bronze, making it charge. Raph did the same, holding the scythe at his side. When the hell-hound pounced, Raph rose the scythe into the air, where it made contact with the monster. It exploded into dust, its essence descending into Tartarus. Panting, he held the scythe in his hand. With a hunch, he flipped it up, making it transform back into coin form. He decided to head back home.

When Raphael turned 16, he left his home to find where his destiny is. He was walking along the desert when he was attacked by a chimera. He wasn't scared of this beast, he was scared of dying. Completely on instinct, he took out the coin, which somehow came with him, and flipped it. Mid flip, it turned into a bronze sword. The chimera roared at the sight of the blade. It charged, both jaws extended. He dashed toward it, raising his palm up as he ran. Somehow, he slowed down time a bit just enough to jump on top of the chimera. When time had went back to normal, he had already stabbed it through the chest, killing it. Raph was exhausted, not knowing how exactly he did that. All he knew know was that he was tired and needed to continue his trip.

Raph traveled across the world, taking whatever he could to get by. His last sleeping place was somewhere in North Africa before heading off again. Unknowingly, he stumbled upon the Lotus Eaters and was unable to resist temptation. There he stayed centuries, watching as the Lotus Eaters, along with every thing else moved more to the Western Fire. During the year 2000, Raph started to come to his senses a bit, trying hard to over come the power of the Lotus. 2013, he finally over come it's hold of him and burst out of what appeared to be a casino. Raph looked around, not sure at what he was looking at or where he was. He was in what is now called Las Vegas.

Raph wandered the United States, still not sure when and where he was. He was still attacked by monsters, so he guessed the gods were still around. A month had passed before he reached New York. He rested in a small alley and waited for daylight. When it came, he awoke to the face of a young women, same age as him. She told him that she had come to take him to Sanctuary. He was skeptical and hesitant at first. She then told him that the gods are still around and have been the same as they have ever been. Careless, unorganized, and only care about themselves. When Raph heard this, that same hatred he felt millions of years ago reignited and Raph gladly came with her to the Sanctuary.

Why?: Raph believes the god's are irresponsible with the power they possess, thinking they are better than everyone. He hates them for quickly judging him, trying to kill him, just because his father was Kronos. He never did anything bad then until now. Now, he wants the gods to step down. He wants to live in a world full of equality, where no one is judged, and no one is better than the other.

Please add his first monster attack between the ages of 10-12, since Kronos is quite powerful.

i have a hard time believing the mother would be kronos' first mortal woman. i mean we have had a bunch of kronos kids already

Damn Hydro, use a template for once >.< Fixed it.

Retrieved from "https://camphalfbloodroleplay.fandom.com/wiki/Claiming:Broken_Covenant/Raphael_Pachelli_-_Accepted?oldid=1581808"
Community content is available under CC-BY-SA unless otherwise noted.