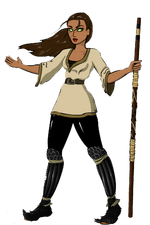 History: As the Titan War was drawing to a close, Gaea began to realize that her defeat in the war was inevitable and so she needed to take steps to secure her legacy. Having realized that the Titans and monsters she had conceived were not getting things done, she journeyed down to the earth she had created and seduced a mortal there and became pregnant with a child. She knew then that the key to her return to dominion was through the swaying of the human population and so she needed a key to manipulate them in the distant future. After the baby was born, she cuddled her close and went to sleep, and in this state the baby never aged. 5000 years passed and Gaia continued holding the baby close as her time had not come. Finally in the year, 1998, she found the perfect opportunity.    Mort Rosenthal grew up in a quirky hippie community in Eastern Oregon with progressive philosophy and a loose affiliation with Paganism. One of the most emphasized philosophies within the village was the idea that human destruction on the earth has resulted in humans no longer being worthy of thinking themselves superior to animals. As Mort reached adulthood and became more and more attached to the community, he developed a keen interest in the show Avatar: The Last Airbender and its themes of elements and nature. Very soon, he had gotten the whole village in on it and it became a part of their culture. The village developed a particular affiliation for earthbending and combined their love for the show and Pagan culture into a casual worship of the Universally appreciated goddess Gaia. Seeing an ideal location and time, Gaia dispatched a nymph that delivered the baby to Mort's front door with a note explaining her identity and who the girl would grow up to be. The note had also been magically enchanted to cause whoever touched it would feel obligated to care for the baby regardless of circumstance. Intriqued by the baby, Mort decided to name the baby Terra and raise her on his own.

Due to his upbringing, Mort had been receptive to the knowledge that the baby was Gaia's, but he remained skeptical that the child  would grow up with special powers. His skepticism seemed well placed for the first ten years of Terra's life as she did not seem to exhibit any supernatural qualities. But after her 11th birthday, she began displaying a strange ability to move rocks of increasing size and shape them to her will. The village was ecstatic and awed when they learned of this and when Mort finally revealed to the village the true identity of the woman he had conceived the child with, they became determined to increase their worship of the goddess Gaia tenfold. New of this miracle child spread quickly throughout Eastern Oregon and soon many parts of the region had taken up worship of Gaia whether it was in minor or major capacity. Unfortunately, this sudden spreading worship of Gaia did not sit well with Zeus and the powers that be on Olympus and they resolved to squash the worship using whatever means necessary.

Zeus cleverly dispatched a Satyr to Terra's village to warn her that as a demigod she could at any minute be attacked by  monsters and so they had to leave to avoid placing herself and her friends in certain danger. With Mort's blessing she reluctantly agreed and the Satyr took her to a hotel outside the village. In the wee hours of the morning though, Terra got cold feet and quietly exited the hotel to return to her village. When she reached it however, she found it utterly destroyed by a storm, with its residents all slain. Grief-stricken and furious, she returned to the hotel and interrogated the Satyr. Under interrogation, he revealed to her that Zeus had punished the village for their insolent worship of the titan Gaia. In a rage, she snapped his neck and for a couple months wandered Eastern Oregon sorrowfully and vengefully.

One day, a 30 year old son of Circe who had been a member of the Broken Covenant but had become disillusioned with it and departed saw Terra sullenly levitating some rocks and recognized her instantly as a demigod. He at first thought she was a daughter of Cybele and called her out as such, planning to kill the girl for old time's sake. However, she soon revealed to him that she was in fact a daughter of Gaia and when she told him her story he felt an ounce of pity within him and decided that she would benefit from some sanctuary and guidance within the Broken Covenant. With nowhere else to go, and with a desire for revenge against Zeus and the other Olympian Gods for the destruction of her village, Terra agreed to go with him. The pair eventually reached the borders of the Sanctuary and parted ways, as the son of Circe still possessed no desire to return.

Desired Faction: Terra desires to join Liberi Superum as she feels that humans need to be reminded that their destruction and wanton ways have rendered them inferior beings no better than animals and she wishes to remind the apathetic Olympians that their powers are no match for the power that is the originator Gaia.

Retrieved from "https://camphalfbloodroleplay.fandom.com/wiki/Claiming:Broken_Covenant/Terra_Sato_-_Accepted?oldid=1233571"
Community content is available under CC-BY-SA unless otherwise noted.