Personality: Vivian basically defines the word 'slut'. She loves to flirt with any teenage male and like her parents, she doesn't care if it's a one night stand or if it's a friends with benefits relationship. Vivian hates it when anybody asks about her other because she really loathes her. It is also rare to see Vivian crying over something. Vivian is also very, very spoiled...

Weapon: Cb sword (named Excalibur) that can change into a butterfly necklace 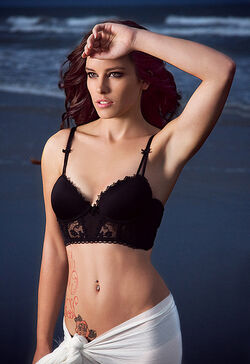 Bryan Greene was a man who loved to toy with women. One night, he met a woman who was absolutely beautiful and stunning. That woman was Psyche. Psyche at that time was toying with various men for fun and didn't care whose heart she broke. Bryan went up to her and seeing that she was very drunk at that time (they were in a bar), he took advantage of her and they slept together that night. The next day, Psyche was in bed with him and remembered what happened the night before. Bryan woke up, still a bit unsatisfied (meaning he was still a bit horny...) and asked her if they can go out. She agreed because she felt that way as well. So the next several dates they had ended up in sex somehow. On the sixth day they were going out, Psyche noticed that she was pregnant. So she left Bryan in the dust, without telling him who she really was. Several months later on Bryan's door step, a baby was in a basket, waiting for him. It was a girl and she was wearing a butterfly necklace. A card as also put in the basket, which was from Psyche so Bryan carried the basket inside to his house and placed it on a table. He read the card and widened his eyes as he read it. The letter explain who Psyche really was. Bryan didn't want to believe it and he didn't want to do anything with the baby. So he went to his goody two shoes sister Mira Greene. Mira gladly accepted in taking care of the baby and was informed that she was a demigod. Mira read the card Psyche gave him and knew that it wasn't a lie (she dated a demigod herself so she knew how these things go). So throughout the years Vivian grew up, Mira Greene was the one who took care of her.

Vivian lived a very happy life. Since her 'mother' was a very famous model for Victoria Secret and other companies, she had a decent living style. Vivian enjoyed being the popular one at at school and often broke a lot of boys' hearts just like her biological mother and father did. Even though it seemed that Vivian had a wonderful life, she was actually upset about her life and wishes that she was somebody else since her father barely pays attention to her since he got married and started his own family. Mira does everything she can to make Vivian very happy so that made her somewhat of a spoiled child. On her spare time, Vivian took martial art classes and art classes (she loved drawing).

At age 13, Vivian had her first monster attack. It was a hellhound and she was by herself, in her back yard when it attacked her. The hellhound slashed her and her butterfly necklace came off. It flew from her neck and morphed into a CB sword. On instincts, she ran to the sword and made several slashed on the monster. After that, the monster disintegrated and she left the fight with only a couple of bruises.

At age 14, Vivian had another monster attack. This time, it was a harpy. The harpy attacked her after school ended and she immediately morphed her necklace into her sword. Since it can fly, she had a harder time disintegrating it. But after awhile, she turned it into dust and she immediately went back home.

At age 15, she started turning into a slut. Many boys hearts were broken in that year and a lot of the girls started hating her. She had another monster attack as well. A Stymphalian Bird attacked her and like the past two monster attacks, she morphed her necklace into the sword and made some slashes on it. After this monster attack, she wanted answers. She told Mira about this and the past monster attacks she had before. Mira then told her the story about her father and Psyche. Outraged that they couldn't tell her sooner, she stopped talking to Mira and hated her father even more.

At age 16, a fire-breathing horse attacked her in her backyard. In one slash, she disintegrated the horse but she got some burns on her right arm (they healed though).

At age 17, a satyr who was a friend of Mira's demigod ex, agreed to bring her to camp. Seeing that she had no choice but to go to this 'camp', she went with the satyr. On the way, they met an ex BC member who ruthlessly killed the satyr. She told her that she was from the BC and was a member of the Civitas Popularis. She told her everything the BC could offer her and was willing to take her there. She asked if the lady can bring her to the BC and the lady agreed. The lady lead her there and the next day, she went inside the doors of the BC where she told Heinrich her story and that she wanted to join the BC (join the Civitas Popularis faction to be more specific).

"The Gods... are selfish and weak. Not to mention, very unjust. Do they even love us? No! They don't even care for us. All they just do is treat us as if we were their slaves/pawns and do all of their dirty work for them. But it's been a long time now that they have done this. For quiet some time, they have ruled over us and that has made them even more power hungry. We need to overthrow them some how! Once we do, we will choose our rulers and the good thing about that is that they won't be in power for a very long time. If this were to happen, nobody will be like the gods. I say, that we've had enough of this! And like all of those who are in your faction, I agree with you that we have to overthrow the gods and we must bring justice and democracy!" ~Vivian Greene

Backstory reasons: As vivian realized how much she hated on her mother that Mira spoke so highly of, she started hating on the gods as well. It was all because Psyche didn't even to contact Vivian as she was growing up or even try to help her when she needed her mother's help. (Not told in the story but it's true)

Does she have any true personal motives or backstory reasons to hate the gods? If so, they are not quite clear. Why does she hate the gods all of the sudden, just because someone told her about them? That seems unrealistic.

Well, she does have personal motives. Like her mother not caring about her and basically abandoning her.

okay i removed the first reason. >.<

Retrieved from "https://camphalfbloodroleplay.fandom.com/wiki/Claiming:Broken_Covenant/Vivian_Greene_-_Accepted?oldid=1348785"
Community content is available under CC-BY-SA unless otherwise noted.