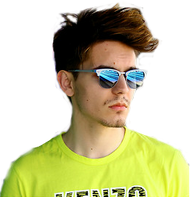 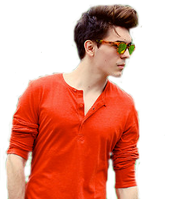 Personality: Aaron is a tough guy even though he's pretty depressed by the death of all of his family. He tries to be upbeat but sometimes he just breaks down. He's pretty isolated and doesn't like making a lot of friends just encase they leave him.

Greta was an extremely pretty woman when she was in her 20s. Men all around use to ask for her hand in marriage. Yet she would always declined. Greta had set her heart on one man. She was young and foolish and married at a young age to Fritz. Fritz was a strong manly person who worked on his fathers farm for years. This was the only man for Greta.

After a year of their happy marriage, Greta was out with some friends in the local bar. She became very drunk and met a man. This man pressured Greta but she declined. This man pressured her even more and she left the bar feeling awkward. The man followed Greta and threatened her. Greta, scared started to run. She ran into a dark and dismal ally. The man closed in on her and took 'sexual advantage' of Greta. She later became pregnant but told Fritz that it was his under fear of losing him.

Ovil and Benjamin were born 9 month later. They were raised in a Dairy Farm run by their father, mother and sister. They grew up happily with their family. Benjamin and most of his family -excluding his parents- were illiterate. They were close to each other and he was especially close to his brother. They would play for hours on end in the fields and in the woods of their farm.

Benjamin, coming from a small village of Broken and knew almost every one there. As this was nice he would often make friends with everyone, he was a well loved and popular boy. At about age 5 the Nazi party had been voted for governing power over Germany. This didn't really inter-fear with the Zimmermann life anyway. Life carried on for them on their daily work milking, farming, keeping the livestock well feed and looked after.

When Benjamin was 10 rumors reached the town that the Nazis were collecting Jews and others and taking them to large Summer Camps. Fritz found this suspicious and so asked the neighbouring if they could come stay with them. The neighbors happily excepted and the Zimmermann's came to live with them. This carried on with some years and Fritz posed as the neighbors cousin and helped around on the farm. Of course soon the Nazi's came and started to take away the Jewish residents of the Village. Though many had either run away or had also gone into hiding.

The Zimmermann's lived like this for 4 years. Hiding in the house and helping around the farm. When Abigail, Ovil, him and the Ackermann (Neighbours) children were all playing down by the river just by the house. They threw stones into the river and climbed trees. As Ovil threw a stone into the river he saw a large black dog at the other side. He gave a large Yelp and the others turned to see the beast. Ovil quickly climbed up the tree and so did the others. At the top they gave a loud yell for their fathers. The creature leaped at them, but luckily the children where just out of reach. Their fathers came running and shot at the beast with their double barrels. Many bullets hit the dog and it ran away but didn't bleed or fall to the floor in pain. News of this quickly spread around the town and a lot thought it too be the Devil cloaked as a large Hell beast.

The next week, word came round to the S.S that a Family of Jews were hiding in the Ackermann's house. The S.S quickly took a squad too the household and took the Zimmermann's away. The Zimmermann were dispatched to Auschwitz Concentration Camp. Here this suddenly took a turn for the worst. Benjamin and Ovil quickly took the eye of one Dr. Joseph Mengele. This was because of them being Identical Twins, and let's just say Joseph 'liked' things like that. Dr. Mengele quickly became friendly with Ben and Ovil, giving them candy along with a lot of other children at the Camp. He would pull them out of labor and take them to his study. Here he conducted experiments on Ovil and Ben, but they were unknowing of this as he would knock them out.

This went on for a year. Ben now had a walking condition from lack of spinal fluid and had one blue/green and one brown. Ovil had a large limp and had to use a crutch to walk. Ben and Ovil where kept in different barracks from the rest of their family. This made them lonely but brought them closer together. At around September 1944 Ovil passed away from to much nitrogen in his body. Mengele had placed 4 nitrogen pipes into Ovil's heart. This killed him instantly and conducted experiments on Ovil's now dead body. He had lost his 'usage' or so they said. Ben on the other hand still had his usage. He was healthy and fit and could sustain more physical and mental pain than his brother.

Sometime later that year, around November the rest of Ben's family were eradicated. But again they still needed Ben, he had some D.N.A mutation that Mengele had the urge to unlock and understand. So he carried on pulling out blood and other D.N.A samples from Ben's body. He was so close and yet so far from unlocking his gene code. In this time he became lonely. His family were dead and he was alone in his cell. He only made one friend in this time, Alesky, a Polish Jew who had also lost his family to the Gas Chambers.

At January the American's arrived at Auschwitz. They set every one there free. This was the unhappy time that Ben found out what happened to his family. This drove him to great sadness and he didn't want to stay in this country any more. He heard that a lot of the remaining Jews were traveling to America. Ben found this the perfect idea to leave behind his history. He also changed his name to Aaron Miller. He moved with a massive group of Jews. They arrived in Cuxport and boarded a boat. Luckily because of the mass chaos they didn't seem to notice Aaron. They reached San Diego 5 weeks later. When they asked to look at documents Aaron seemed just to 'jump' past them. He thought really hard about it, and just appeared at the other side of the boarder pass. With his new found skill he felt tired but couldn't stay here. He couldn't really go anywhere. He only had $4 and 68¢. He traveled into the back of a large van and fell asleep in the back. He slept for 6 hours until the van came to a quick stop. He left the van and stood there in shock. All the bright-lights hurt his eyes and he looked around at all the large casinos and buildings. He had read that Las Vegas was where people mad millions of dollars. He wanted to be a millionaire, one casino took his fancy. The Lotus Casino stood in front of him. It was written in large white lights that made his eyes sting looking at it. He knew that this was the place for him and so he entered.

The staff were so kind to him, feeding him for free. He won hundreds of pounds and quickly bought a Platinum card and room. He loved this place, why would he ever leave? Well he didn't want too. It had only been 3 weeks and he felt like it had happened in the matter of days. In fact it had been 69 years. One day while Aaron was eating ice-cream he heard a voice. He looked around, he was alone and the place was quite. Only music was playing, but no one talking. The voice was deep and dark. It was cold, like Death was talking it had a deep gritty voice. He told Aaron that he had to leave this place. That he had a destiny, he told him that someone would be waiting outside for him. Aaron hesitated, a lot. But in the end the voice seemed to get angrier. So Aaron in the end left. But the staff seemed to urge him to stay. He declined and tried to brush them off. Again they urged him so he shadow traveled out. He arrived outside in the bright new lights. The place had seem to change, buildings had grown and changed. The light blinded him and he stood there stunned for a few seconds until he was dragged into a dark car.

In the driving seat was a boy. He must have been between 18 and 20 but had a full beard and messy dark hair. He seemed normal he just wore weird cloths. He had a bright orange shirt on, a large had that seemed very very strangely made. The weirdest thing was that he had very hairy legs. Actually they were amazingly hairy, and the lower Aaron's eyes went then he saw the feet. Wait, they weren't feet, they were hooves. HOOVES ON A PERSON? Aaron thought he ate something strange and tried to leave the car, but he passed out from tiredness. He awoke some time later the hairy goat man driving this car. He wished Aaron a good morning and started to talk. A lot. He talk for ages about Greek gods and myths and old stuff. After a long time of talk he mentioned Aaron's dad. His dad? His dad was dead, how did this guy know about him? This guy told Aaron that his dad was a Greek God. Aaron nodded and just laughed awkwardly and looked out of the window.

He must have slept for at least a day and some hours. He truly was shattered. It was like a worm had sucked all the energy out of him. The goat man seemed to stop at the bottom of a wooded hill. He helped Aaron walk and lead him up. Aaron was to weak to really try and fight back and so he followed behind. Up and up they went until they reached a large stone arch, at the top were carved words. But Aaron's eyes hurt to much to read them. All he could read was Blood. Blood? Was this another test lab? He panicked and tried to fight back, but falls on his face hitting it hard. He felt like he was being dragged through the arch to his new found life.

This claim has been approved as a child of Thanatos. You now need to make a page for them and a word bubble, if you aren't sure how to do this you can see the guide here. Once you have done that you can add your character's name to the cabin list located on the cabin pages and start role playing with your new character. If you have any questions feel free to ask a member of the Admin team.

Retrieved from "https://camphalfbloodroleplay.fandom.com/wiki/Claiming:Camp/Aaron_Miller?oldid=1200003"
Community content is available under CC-BY-SA unless otherwise noted.