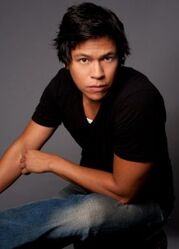 He is a very bold, spiritual kid. He is wise beyond his looks, having listened to 250 years worths of stories, myths, and observations. At the same time he is naive to the modern world, only knowing of stories about things. Wanting to blend in more with everyone, he reluctantly gave up his native garb, and is trying to adjust to modern times. Still, he holds on strongly to his native ancestry.

His mother caught Apollo's eyes when she was just a young girl. He blessed her with the power to see through the mist, along with minor prophecy telling powers. She was quickly recognized by the tribe, and earns the title of 'seer'. Later in her life, Apollo finally approached her, she quickly recognized him as a 'god'. They had a good night, and he left her bearing a child. He was born in 1750 (just before the american revolution had begun)

Achachak lives as a normal native american, learning culture. Mother tells him she speaks to the gods as a 'seer', and that he was brought to her by the gods. (so he has a small idea of being a demigod). He learns to hunt at a young age, since it is mainly what the men are meant to do. When he is of age to be allowed to go out into the woods alone to hunt, his mother gives him the bow 'the gods' have left for him, along with the quiver of arrows. She warns him to never use the arrows for normal creatures, so he leaves it in their teepee. Eventually he starts noticing the influence of the American settlers, and is terrified by the "thunder sticks" they carry (guns). Eventually the tribe themselves get some of these "thunder sticks". He never got to touch one, even though he was curious. He also holds spirituality in high regard as it is taught to each child, and is part of their culture.

When he was 13, out hunting small game alone nearby his teepee. A Mountain Lion(Hellhound) approached him, although it seemed off to Achak.Since he was up in a tree, the lion wasn't able to attack right away. Achachak quickly yells at it, hoping to scare it off without harming it, but the thing quickly slashes at the tree's trunk, knocking a large portion out, and causeing the tree to start toppling. Achachak quickly jumps out of the tree, landing rather hard on the ground. The lion at the opposite end of the tree slowly grows large, darker, and more dog-like. It was little larger than it had been as a lion, about the size of a bear. In fear, Achachak quickly shoots a few arrows at it, a few missing, as it tries to make it's way over the limbs and branches of the tree. The normal arrows did nothing, so he turns to run back to the tribe. He runs towards his teepee, but since the hellhound is faster, it lands a quick swipe across his leg. Achachak falls into the teepee, and finds the quiver of arrows that Apollo had given them. Hellhound attacks the teepee, ripping shreds into it. Achachak fires off a CB arrow from the quiver through the teepee, and hears a sharp bark from the Hellhound. He had hit it's shoulder. The Hellhound was wounded, and the next arrow lands properly in it's lungs and kills it. Achachak then watches it's body dissolve into golden dust. Still, he takes a moment to pray for it's death. He then retrieves arrows. When his mother returned to their teepee, he explained the attack to her as a spirit animal that was testing him. He is then instructed to stay in the teepee until his wound heals.

Meanwhile elsewhere in the world, Apollo has created a plague. It ends up quickly spreading through the American settlers, and in return, they end up collecting things from diseased people's houses. They then use them in trades with the Natives, further spreading the plague beyond Apollo's intent. A Diseased blanket was given to Achachak as his wound is being treated. Quickly wound is infected with disease, and he is horribly sick. He eventually dies of the plague soon after turning 14.

Life in Underworld - Sent to Camp:

Apollo argues to Hades to revive him, since the plague that killed him was his own creation. Hades forces him to work for him (as a peacemaker?). Achachak is ridiculed by some for wanting to return to life, and learns from ghosts and spirits about the outside world, always enjoying their stories; and he learned to speak proper english from some of the other native and american ghosts. After years of working for Hades, he is revived, and sent to camp-halfblood, still having the body of a 14 year old native, but having the experience of about 250 years in the underworld.

Gift from Apollo at birth, returned to him when he was reborn and let into camp

Mostly was used for skinning, he found all sorts of useful tricks with it, so he quickly had it replicated at the forge at camp.

This claim has been approved as A child of Apollo. You now need to make a page for them and a word bubble, if you aren't sure how to do this you can see the guide here. Once you have done that you can add your character's name to the cabin list located on the cabin pages and start role playing with your new character. If you have any questions feel free to ask a member of the Admin team.

Retrieved from "https://camphalfbloodroleplay.fandom.com/wiki/Claiming:Camp/Achachak?oldid=1514892"
Community content is available under CC-BY-SA unless otherwise noted.