Personality Adain, much unlike his creators, is really nice. He chooses to be the peacekeeper/peacemaker between others, especially his sarcastic and mean creators. Although, he is rather untidy, oblivious and forgetful at times. Most of the time he is sweet but, will fight if needed. 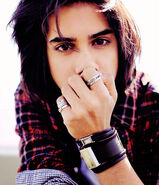 History Sammi and Gaven had snuck out for the night, as they hadn't seen each other for a while, and, they both felt like doing something bad that night. So, they got a picnic blanket, and went to a remote spot in the woods, laying the blanket down, and then, themselves sitting down. The two began to cuddle, not bothering to do anything besides that, as they felt they didn't need to. Watching the stars together were enough for the two.

The two, silent, cuddling, and happy, felt true love with each other, feeling as if not only the stars were perfect but, the other as well. So, while the true love was going on, a spark emitted from it, spawning a single Erotios. As their erotios, Adain, popped out at them from behind a bush, they were quite freaked out. As he explained what was going on, their shock lessened but, they were still quite freaked out. However, they accepted him, and, he stays at Camp with the two of them, sometimes becoming the peace keeper between the two.

This claim has been approved as Erotios. You now need to make a page for them and a word bubble, if you aren't sure how to do this you can see the guide here. Once you have done that you can add your character's name to the cabin list located on the cabin pages and start role playing with your new character. If you have any questions feel free to ask a member of the Admin team.

Retrieved from "https://camphalfbloodroleplay.fandom.com/wiki/Claiming:Camp/Adain?oldid=1200024"
Community content is available under CC-BY-SA unless otherwise noted.