Personality: Adeline is a bit of a assassin. She likes to play the fish and bait trick. She tricks her victims and lures them into whatever she wants. Then she kills them. But unlike some big killers, she takes this into consideration. She doesn't go willy-nilly on who she wants to kill.

Weapons: A pen that turned into a sword when in danger and a axe 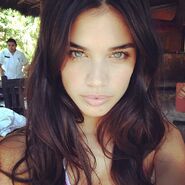 did you meant for this to be a BC claim? (you have one god parent listed so that's why im assuming)

Fixed. XDD sorry it's not

Hecate's cabin is currently full and im not sure if it's going to be open anytime soon >.< do you want this on hold until the cabin is open?

Looks good to me

This claim has been approved as a daughter of Hecate. You now need to make a page for them and a word bubble, if you aren't sure how to do this you can see the guide here. Once you have done that you can add your character's name to the cabin list located on the cabin pages and start role playing with your new character. If you have any questions feel free to ask a member of the Admin team.

Retrieved from "https://camphalfbloodroleplay.fandom.com/wiki/Claiming:Camp/Adeline_Eve_Marie_Sinclair?oldid=1503201"
Community content is available under CC-BY-SA unless otherwise noted.