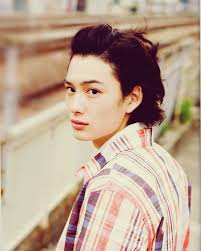 He is a person who can sometimes be considered hard to read--mysterious. If he was a movie, he would be the one with the genre of suspense. Sometimes, he loves to play around, sometimes, he's just real serious. Nobody could truly understand him--even he is still trying to know himself.

Ryuu's mother, Junko, was a well-known celebrity of Japan. Her well-earned good image all went down to nothing when she was caught in a scandal because of Hephaestus. They used to date secretly for a few months and then they did it. After nine months, Ryuuichi was born. Junko was selfish and only thought of her own image. Eager to get rid of the illegitimate child, they almost got killed in a car accident when Ryuu was just three years old. Junko was hurrying up so that no one could spot her with her son.

The two managed to survive but then it only ruined Junko's image even more. Ryuuichi's childhood was not so normal. He was always hidden by his mother and never let out in the public. He would always play by himself at home and talk to no one but he did manage to go to a normal school and had a few friends. He was told to never reveal the identity of his mother though.

Unlike the other children, his hobby is to figure out how his toys were assembled. For some reason, he just loved doing that. He would dismantle each and every one of them and then study each piece. Eventually, he would learn how to get them back together.

When he reached the age of thirteen, his encounter his first monster attack with a hellhound. It was supposed to be the time when his mother finally revealed him to the public but when he was left alone outside the studio for a moment, the hellhound came and chased him. Later, a half man half goat, called a satyr, came and helped him with the monster although all he could do was distract it for a moment. Ryuu had to do the attacking himself. The satyr handed him a celestial bronze weapon. What seemed to be a small flashlight was actually a sword.

While the satyr distracted the hellhound by growing vines through playing his reed pipe, Ryuuichi did all what he could to kill it. Thankfully, the hellhound was slow enough to turn around when the opponent was already behind. He stabbed it behind and then it disintegrated. Too dumbfounded by all the happenings, the satyr decided to just take him home and explain everything.

The satyr finally told Ryuuichi about everything and asked him to go to camp with him but he refused knowing the down side of coming with him. He wanted to live a normal life and so he asked the satyr to just leave him alone.

Of course, the satyr wouldn't do that and so he just let the boy live normally until he decided to come with him. While outside, the satyr helped Ryuu discover his skills and powers as a demigod. They had to fight monsters for like twice a month or so (not so frequent since he's not a child of the Big Three).

When he turned 18, he finally got tired of living outside camp--fighting off monsters. They have started to come more often since his scent has also become stronger as he aged.

He arrived to camp at the age of 18 at last.

This claim has been approved as a son of Hephaestus. You now need to make a page for them and a word bubble, if you aren't sure how to do this you can see the guide here. Once you have done that you can add your character's name to the cabin list located on the cabin pages and start role playing with your new character. If you have any questions feel free to ask a member of the Admin team.

Retrieved from "https://camphalfbloodroleplay.fandom.com/wiki/Claiming:Camp/Akai_Ryuuichi?oldid=1399824"
Community content is available under CC-BY-SA unless otherwise noted.