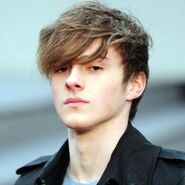 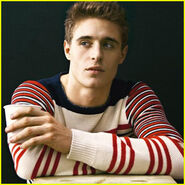 Add a photo to this gallery
Personality: Alex is a bright and bubbly guy who will talk to anyone. He is easily impressed and, when he falls for a girl, he falls hard. Alex is a natural leader and will often be the one to start a conversation or break the ice with someone he doesn’t know. He’s always around when you need him, but is never clingy. In battle, Alex is strong and quiet, tending to be the defensive type.

History: Elizabeth Carless was born in Australia and moved to New Zealand at five years of age. Her family began a farm predominantly grazing cows and sheep, and kept (where u keep bees) for themselves. As Elizabeth grew, beekeeping became her passion. Her friends would urge her to come out and socialize and meet guys, but she always turned them down, saying she had work to do. When Elizabeth turned 20, she went out for a night on the town with her friends. As they were walking down the main drag, Elizabeth turned around and crashed straight in to a guy behind her. The man smiled at her kindly and helped her up from the ground. He introduced himself as Aaron Crewe.

Elizabeth and Aaron fell in love and Aaron moved to Elizabeth’s family farm. He was impressed at the level of dedication Elizabeth had to her beekeeping and enjoyed shepherding the sheep and cows. Before their relationship progressed too far, Aaron sat Elizabeth down and explained to her that he was really the ancient Greek God, Aristaeus. He explained that if they had a child together, the child would be special, and he wouldn’t be able to interact in any direct way with the child. He also told Elizabeth that there was a place where Alex could go if he was ever in danger. Elizabeth was devastated, but still loved Aristaeus and made him swear that, if they had a child, he would always indirectly look out and protect them. Aristaeus swore on the River Styx.

One day, Aristaeus left unexpectedly, and Elizabeth knew she must have been pregnant. She continued working around on the farm, and her parents moved out of retirement to support her in her pregnancy. When she gave birth to a beautiful boy, Elizabeth noticed a birthmark on the small of his back that looked suspiciously like bee wings. Elizabeth named her child Alex, and he grew up on the farm, learning to look after the cows and sheep and collect the bees’ honey.

When Alex began going to school, he was diagnosed with ADHD and dyslexia, but this didn’t stop him from making plenty of friends. On the way home from school one day, a stray blue heeler began following him around. Alex tried to shake the dog off, but it followed him all the way home. That day, Elizabeth received a note saying that the dog’s name was Bluey and he would look after Alex. There is also someone at Alex’s school looking after him, the note said.

When he was twelve, Alex and his friend Joseph, were searching in the woods around the farm for a lost sheep with Bluey when a hellhound burst out from the scrub. Alex screamed and when the hellhound swiped at him, he ducked. Alex side stepped the hellhound and held out his hand in anger, shooting bee stingers from it. Alex stared at his hand in awe, surprised at what had happened. Joseph told him to run and then defeated the hellhound by pulling out his wood pipes and making a tune to pull the hellhound into the ground by the roots.  Bluey ran to the farm’s border with Alex, where the lost sheep was grazing calmly. Joseph appeared and urged Alex to tell his mother, but Alex wanted to wait longer to tell her, thinking she would react in the wrong way.

Alex asked Joseph to train him in case something like that happened again. Joseph agreed, and for the next four years they trained every day, defeating various monsters with Alex growing into his powers more.  Joseph explained to Alex how he was a satyr and how the Greek Gods were alive and kicking. Alex took absolute charge of the cows and sheep for his mother as he worked with them better. When he was 16, Joseph persuaded him to go to Camp Half Blood, a safe place for people like him. The day before he left, a bronze shepherd’s crook appeared in his room with a note;

I am proud to call you mine.

Use the crook wisely

It will transform in battle at your touch.

Alex travelled to New York with Joseph and Bluey over land and they reached Camp Half Blood safely on his seventeenth birthday. Within five minutes of being at camp, Alex was claimed by his father and he joined his few siblings in the Aristaeus Cabin.

Weapons: His shepherd's crook that turns into a 3 foot sword in battle.

Ok maybe it says and I'm too tired and missed it >.< but what is Joseph? satyr? demigod?

I've included that Joseph is a satyr :)

How old was he in his first monster attack? How old is he now after arriving to camp as well?There is a crime, but no criminal. ★❣Broken❣★

I added that he was 17 when he got to camp. It says he was ten when the hellhound attacked.

hmmmm 10 seems a little too young for alex to start manifesting his powers. and btw he could spend a few more years, like till he's 14 or 15 without a monster attack and seriously thx for making an aristaeus kid! >.< the cabin could use more members

Ok, he's twleve now when he is attacked :)

why wouldn't the satyr send him to camp right there and then? since when do satyrs train demigods themselves?

Because Alex refused. I didn't think it would be in the satyrs nature to drag a demigod to camp against their will, and seeing that Alex needed to be prepared in some way, Joseph gave him basic training. Is that ok? :)

How did Joseph defeat the hellhound? Why did Alex want to wait before telling his mom about the hellhound? How did they get to New York? Just to be sure, when Joseph persuaded Alex to go to Camp, he had been 16 for quite some times yes? Because if he just recently turned 16, it wouldn't take a year for them to get to Camp. Take your time. I've got forever to wait -Demi ღ

I added how Joseph defeated the hellhound and why Alex didn't want to tell his mum. I also aded how they got to CHB, and yes, he had been 16 for some time

Everything looks alright. Remember to add in the char name to the cabin list and his picture to the photo album :)

This claim has been approved as a child of Aristaeus. You now need to make a page for them and a word bubble, if you aren't sure how to do this you can see the guide here. Once you have done that you can add your character's name to the cabin list located on the cabin pages and start role playing with your new character. If you have any questions feel free to ask a member of the Admin team.

Retrieved from "https://camphalfbloodroleplay.fandom.com/wiki/Claiming:Camp/Alex_Carless?oldid=1200085"
Community content is available under CC-BY-SA unless otherwise noted.